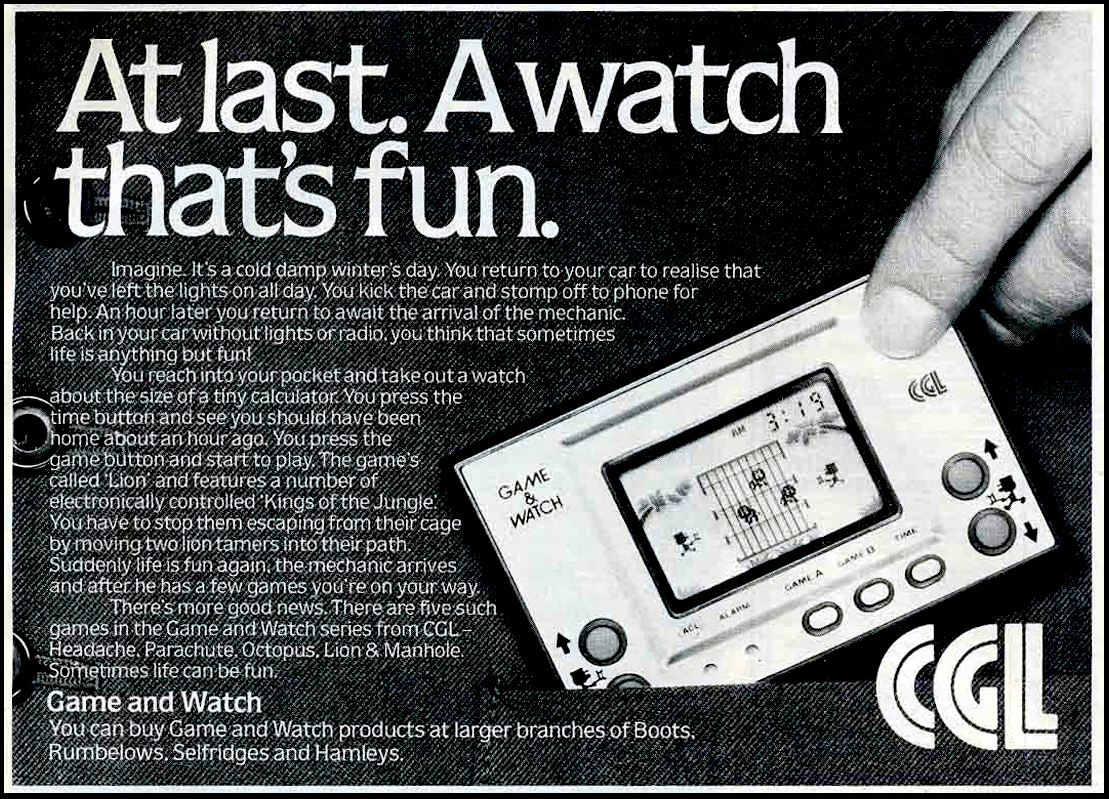 The Game & Watch brand (Japanese: ゲーム&ウオッチ Gēmu & Uotchi; called Tricotronic in West Germany and Austria, abbreviated as G&W) is a series of handheld electronic games produced by Nintendo from 1980 to 1991. Created by game designer Gunpei Yokoi, each Game & Watch features a single game to be played on an LCD screen in addition to a clock, an alarm, or both. It was the earliest Nintendo video game product to gain major success.

The units are based on a 4-bit CPU from the Sharp SM5xx family, that include a small ROM and RAM area and an LCD screen driver circuit, although prior to the emulation in MAME there was a misconception in that every unit used a custom ASIC instead of a proper microcontroller.

The series sold a combined of 43.4 million units worldwide.

Origin and design
It is said that in 1979, Gunpei Yokoi, traveling on a Shinkansen, saw a bored businessman playing with an LCD calculator by pressing the buttons. Yokoi then thought of an idea for a watch that doubled as a miniature game machine for killing time.

Those units use LR4x/SR4x "button-cell" batteries, the same type used in most laser pointers or handheld calculators.

Different models were manufactured, with some having two screens and a clam-shell design (the Multi Screen Series). The Game Boy Advance SP, Nintendo DS, and Nintendo 3DS later reused this design.

Titles available in Game & Watch form vary from Mickey Mouse to Balloon Fight, including Nintendo staples such as Donkey Kong, The Legend of Zelda, and Mario Bros.

The modern "cross" D-pad design was developed in 1982 by Yokoi for the Donkey Kong handheld game. The design proved to be popular for subsequent Game & Watch titles. This particular design was patented and later earned a Technology & Engineering Emmy Award.[6][7] Game A and Game B

Most of the titles have a 'GAME A' and a 'GAME B' button. Game B is generally a faster, more difficult version of Game A, although exceptions do exist, including:

There were 59 different Game & Watch games produced for sale and one that was only available as a contest prize, making 60 in all.[14] The prize game was given to winners of Nintendo's F-1 Grand Prix tournament, a yellow-cased version of Super Mario Bros. that came in a plastic box modeled after the Disk-kun character Nintendo used to advertise their Famicom Disk System.[13] As only 10,000 units were produced and it was never available for retail sale, the yellow version is considered rare.[14]

Mario the Juggler, released in 1991, was the last game created in the Game & Watch series.

Headache, released in 1981, is the UK version of Helmet, devoid of the vulgar connotations of the word in Europe. This title is hard to find due to its region isolation and was released under CGL (UK). Headache could arguably be the rarest Game & Watch game.