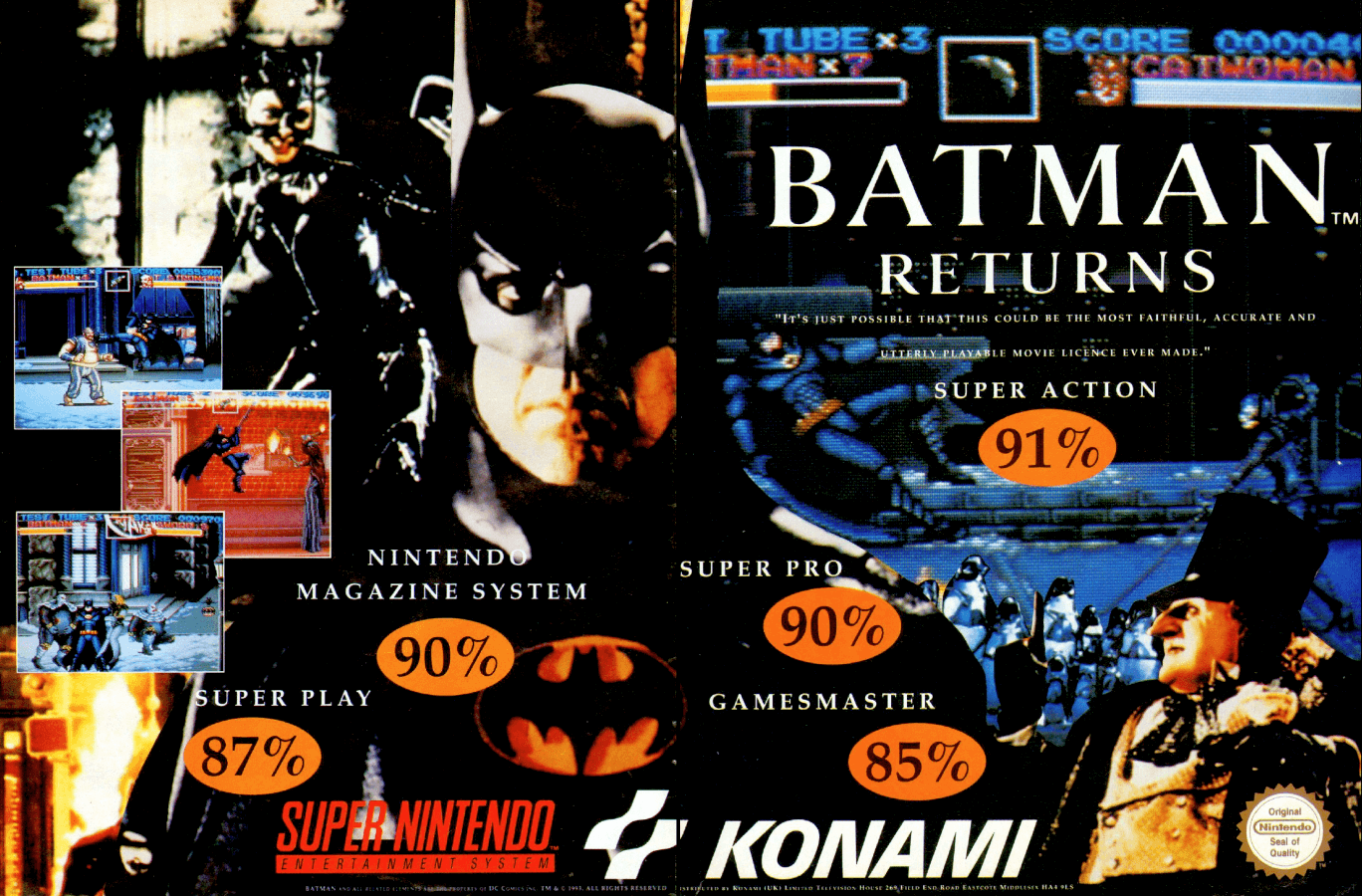 Description
The successful movie sequel Batman Returns spawned many different game adaptations. The SNES version presents the story of Batman's encounter with the Penguin and Catwoman as a side-scrolling beat'em'up, with one Batmobile driving sequence thrown in.

There are two varieties of the beat'em'up levels. One plays like Final Fight [https://imgur.com/a/fubsjUy] and similar games: Batman can move in two dimensions, beating up his enemies with various punches, kicks, combos and special moves. Special gadgets to be used include the famous Batarang to take out enemies from a distance and "Test Tubes" filled with chemical explosives which will damage all enemies on the screen.

In the second type of side-scrolling level, Batman can only move in one dimension, left or right. The Batarang is the standard weapon here, with punches only being used when the enemy gets close. Also in these levels, Batman can use a grappling hook to cross dangerous areas unharmed.

Enemies in the beat'em'up levels usually belong to the Penguin's Red Triangle Circus Gang - clowns in all varieties: thin clowns, fat clowns, clowns on bikes, clowns armed with bazookas, and more. At the end of each level there is a boss fight, including several encounters with Catwoman and the Penguin.

In the Batmobile driving level, the action is viewed from behind. Batman has to evade clowns on bikes and shoot them down when he gets the chance. At the end of the road, another boss fight awaits.

Digitized images from the film illustrate the storyline.

NES version
The NES version of the game is also a beat 'em up game, but closer in style and gameplay to the Double Dragon series. The player only has one life bar (which can be expanded through health packs). It implements a password-save system. Of special note are the two side-scrolling racing levels in which the player controls the Batmobile and the Batskiboat. The music was composed by Shigemasa Matsuo and Takashi Tateishi.

Sega 16-bit versions
The Sega Genesis/Mega Drive and Sega CD versions of the game are more or less identical, as they are both two-dimensional platforming games similar in design to Sega's previous movie-based Batman game. The Genesis version of the game was released on December 29, 1992, during the same time Ecco the Dolphin was released for the Sega Megadrive as well. The CD version of the game features a number of 3D racing levels that took advantage of the graphics hardware provided by the Mega-CD unit, plus improved music in the form of CD audio with a number of animations featuring original artwork (not film photos). While different versions follow the movie's plot from start to finish, the Sega versions start after The Penguin kills the Ice Princess and puts the blame on Batman for killing her, as shown in the game's introductions.

Sega 8-bit versions
The Sega Master System and Sega Game Gear versions of the game are side-scrolling platform games. However, the titles were created independently of the 16-bit versions. This version featured a unique branched level system, allowing players to choose from an easy and difficult route. The latter typically forced players to use rope swinging to navigate over large floorless areas in these versions of levels.

Atari Lynx version
The Atari Lynx version is a 2D side-scroller consisting of four levels. The first level you face the Circus Gang with Penguin as the end level boss. The second level you face the police on the roof tops with Catwoman as the end level boss. The third level you have to defeat Penguin's forces in the sewer, while the four level is titled "Arctic World" where you face Penguin for the final time. The game was developed in-house by Atari-Eypx produced by John Skruch with the main programmers being Jerome Starch and Eric Ginner.[1] There was an Atari Lynx II release which came with Batman Returns.

DOS version
The DOS version of the game, published by Konami, differs considerably from the other versions, in that it was not primarily an action game, rather an adventure game.

Amiga version
The Amiga version of the game was a subject of considerable controversy. Gametek had, prior to the game's release, sent a number of screenshots derived from the PC title to market the game. As such, a number of computer magazines previewed the game as a direct conversion of the PC adventure. The reality, however, was very different. The game was, contrary to expectations, not a conversion of the PC title, but a side-scrolling platform game akin to the console games. It was plagued with bugs, including very inaccurate collision detection.

Music - SNES
This was the only Batman Returns game to make full use of Danny Elfman's film score. All other versions of the game use music created specifically for the game.

Endings - SNES
Depending how well and on which difficulty the game is played, players can get multiple endings for completing the title. Playing on the hardest difficulty is the only way to get the longest and full ending. 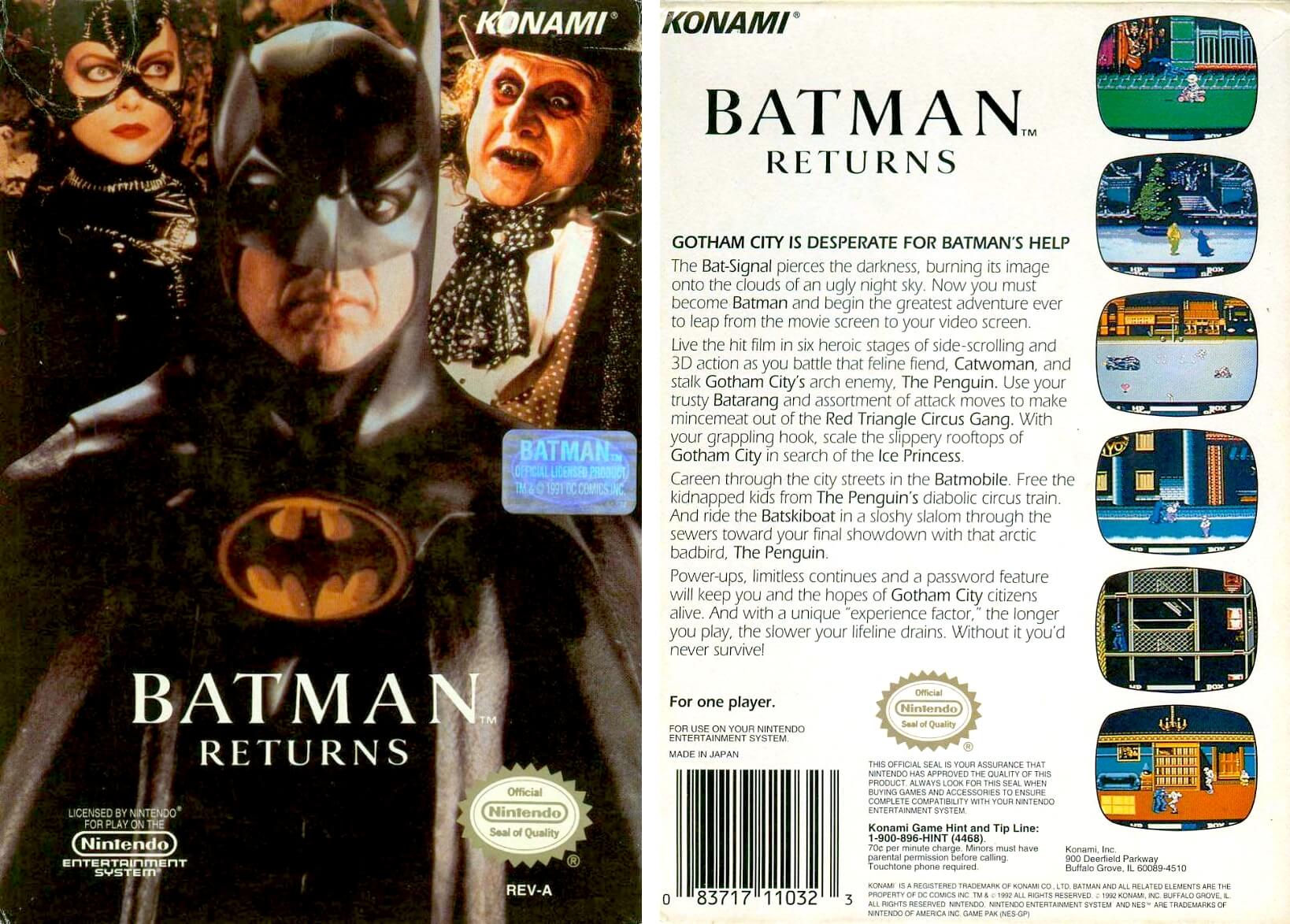