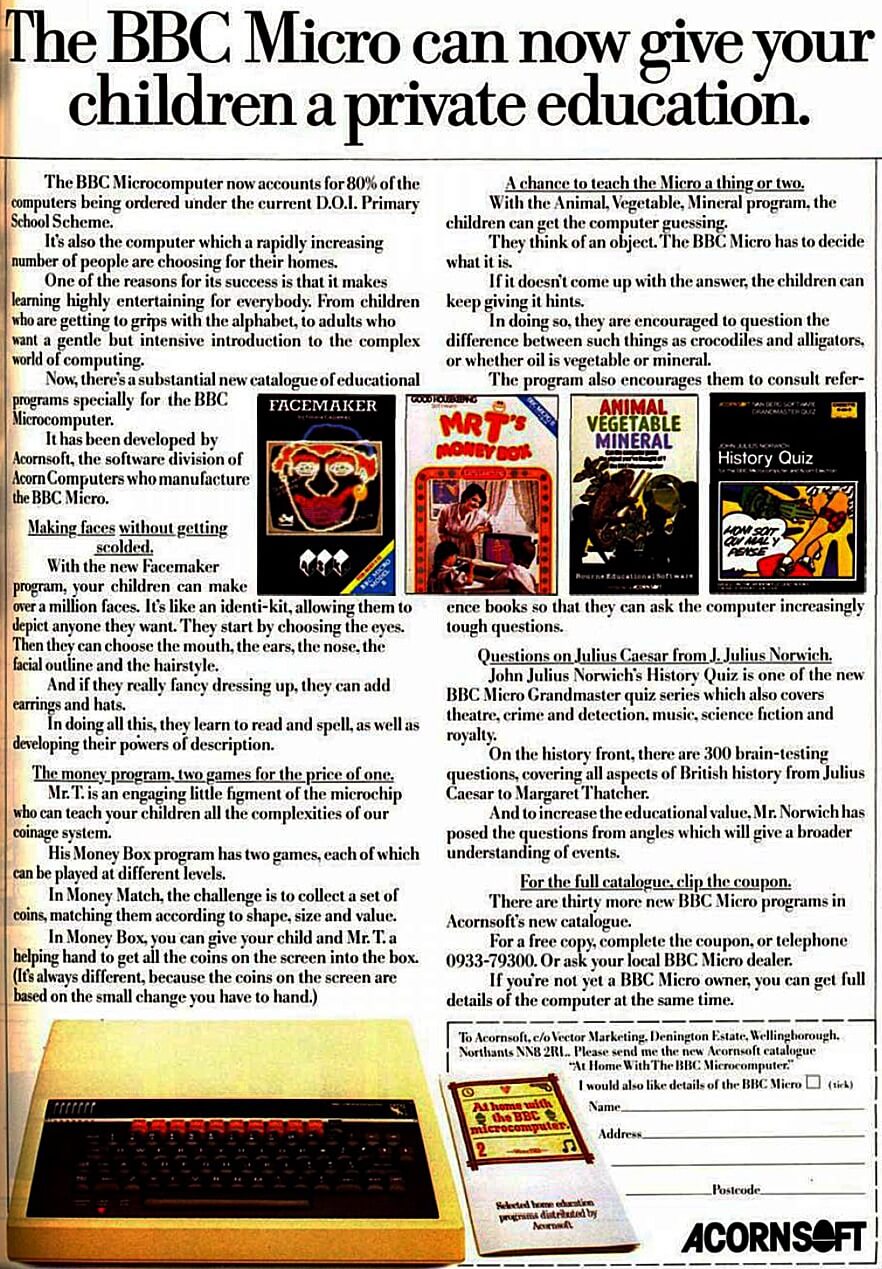 The British Broadcasting Corporation Microcomputer System, or BBC Micro, is a series of microcomputers and associated peripherals designed and built by the Acorn Computer company in the 1980s for the BBC Computer Literacy Project, operated by the British Broadcasting Corporation. Designed with an emphasis on education, it was notable for its ruggedness, expandability, and the quality of its operating system. An accompanying 1982 television series, The Computer Programme, featuring Chris Serle learning to use the machine, was also broadcast on BBC 2.

After the Literacy Project's call for bids for a computer to accompany the TV programmes and literature, Acorn won the contract with the Proton, a successor of its Atom computer prototyped at short notice. Renamed the BBC Micro, the system was adopted by most schools in the United Kingdom, changing Acorn's fortunes. It was also successful as a home computer in the UK, despite its high cost. Acorn also employed the machine to simulate and develop the ARM architecture which, many years later, has become hugely successful for embedded systems, including tablets and cellphones. In 2013 ARM was the most widely used 32-bit instruction set architecture.

While nine models were eventually produced with the BBC brand, the phrase "BBC Micro" is usually used colloquially to refer to the first six (Model A, B, B+64, B+128, Master 128, and Master Compact), excluding the Acorn Electron; subsequent BBC models are considered part of Acorn's Archimedes series.

Retro computing scene
As of 2018, thanks to its ready expandability and I/O functions, there are still numbers of BBC Micros in use, and a retrocomputing community of dedicated users finding new tasks for the old hardware. They still survive in a few interactive displays in museums across the United Kingdom, and the Jodrell Bank observatory was reported to be still using a BBC Micro to steer its 42 ft radio telescope during 2004. The Archimedes came with 65Arthur, an emulator which BYTE stated "lets many programs for the BBC Micro run"; other emulators exist for many operating systems.

In March 2008, the creators of the BBC Micro met at the Science Museum in London. There was to be an exhibition about the computer and its legacy during 2009.

The UK National Museum of Computing at Bletchley Park uses BBC Micros as part of a scheme to educate school children about computer programming.

In March 2012, the BBC and Acorn teams responsible for the BBC Micro and Computer Literacy Project met for a 30th anniversary party, entitled "[email protected]". This was held at ARM's offices in Cambridge and was co-hosted by the Centre for Computing History. Continued development and support

Long after the "venerable old Beeb" was superseded, additional hardware and software has been developed. Such developments have included Sprow's 1999 zip compression utility and a ROM Y2K bugfix for the BBC Master.