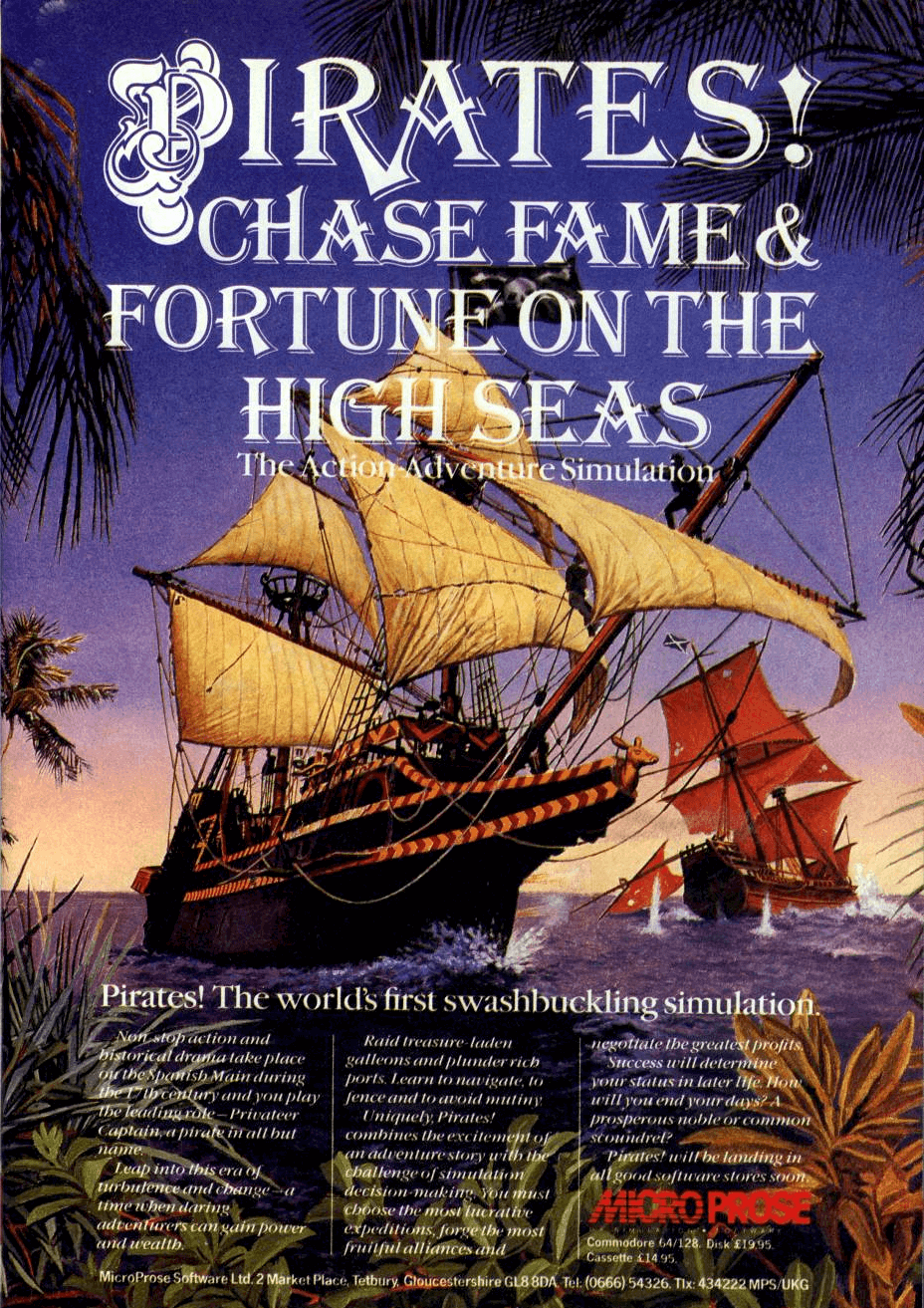 Take on the life of a buccaneer in the golden age of Caribbean Piracy! This game lets you choose from 6 different "ages" (for example, "The Silver Empire" from 1560-1600, "War For Profit" from 1640-1660, etc.), one of 4 nationalities (English, French, Dutch, Spanish), 4 difficulty levels, and one of 5 special abilities (skill at fencing, skill at navigation, etc.). Nine different types of ships were represented.

The goal of the game is to retire with as much gold and land as possible, as many ranks/titles as possible (Colonel, Admiral, Marquis, Duke), and a wife. Finding long lost relatives helps too. You accomplish these goals by plundering cities, capturing and sinking enemy ships, getting in good with governors to receive titles, learn news of "evil Spaniards" holding your relatives, capturing evil pirates, etc.

In early 1986, Meier and fellow MicroProse designer Arnold Hendrick wanted to create a role-playing adventure game, but Meier's business partner Bill Stealey was skeptical of producing non-vehicle simulations. The company planned several game elements that it removed before release, including multiple NPCs per town, more detailed sailing including fleet actions, and a subplot involving religion and nobility. Pirates!' success resulted in the similar Sword of the Samurai.

With five successful years behind him, Microprose considered star designer Sid Meier a selling point and chose to put his name on the box of his next game, despite a shift away from combat simulators he had become known for.

Meier in his interview said that "Pirates! was actually inspired by a technological trick" when "one of our programmers came up with a cool trick where we could create images, pieces of art, by packing them into a font. And that allowed us to very quickly bring in new pictures."

Meier admits that Pirates! was not intended to provide an authentic, true-to-life recreation of historical piracy. “Pirates! was designed more around your fantasy of pirates than the actual reality,” he said in an interview. “That allowed you to bring in all the stuff from the movies, whatever you had read, whatever was in your imagination."

Extras The original box came with a map of the entire Caribbean, with each of the cities noted with their founding date (so you'd know when not to visit them!)

Missions Unlike the Apple II version, some following versions often lets governors offer the player special missions to accept or reject in return for potential rewards.

Music If the player runs Sid Meier's Pirates! on a Tandy machine, the player will find snippets of 3-voice music throughout the game.

The game was widely ported from the original Commodore 64 version, first to the Apple II (1987), then later to the PC (1987), Apple IIGS (1988), Macintosh (1988), Amstrad CPC (1988), Atari ST (1989), Amiga (1990) and Nintendo Entertainment System (1991). The Nintendo Entertainment System port was developed by Rare and published by Ultra Games. Notably, tobacco is replaced as a trade item by "crops" because of Nintendo's family-friendly requirements.

The Pirates! Gold remake was released for Windows 3.1, DOS, Macintosh, and Sega Genesis in 1993. It was also released on CD for the Amiga CD32 in 1994 with enhanced CD audio tracks. Sun sighting was not present in this version, and there were no special items. The game did, however, include several new features, such as extra missions assigned to the player by governors. The PC versions were fully modernized CD-ROM games, with VGA graphics, a MIDI score, mouse support, and a copy protection scheme requiring the player to identify the flag of a pirate ship sighted on the horizon.

Sid Meier's Pirates! Mobile was developed by Oasys Mobile in 2008. Mobile versions were later released for BlackBerry (2010) and Apple's iPad (2011). On April 20, 2012, a version for the Apple iPhone and iPod touch was released, published by 2K Games. In addition, the game was ported over to the Windows Phone 7 on April 9, 2012.

Tommo purchased the rights to this game and digitally publishes it through its Retroism brand in 2015.