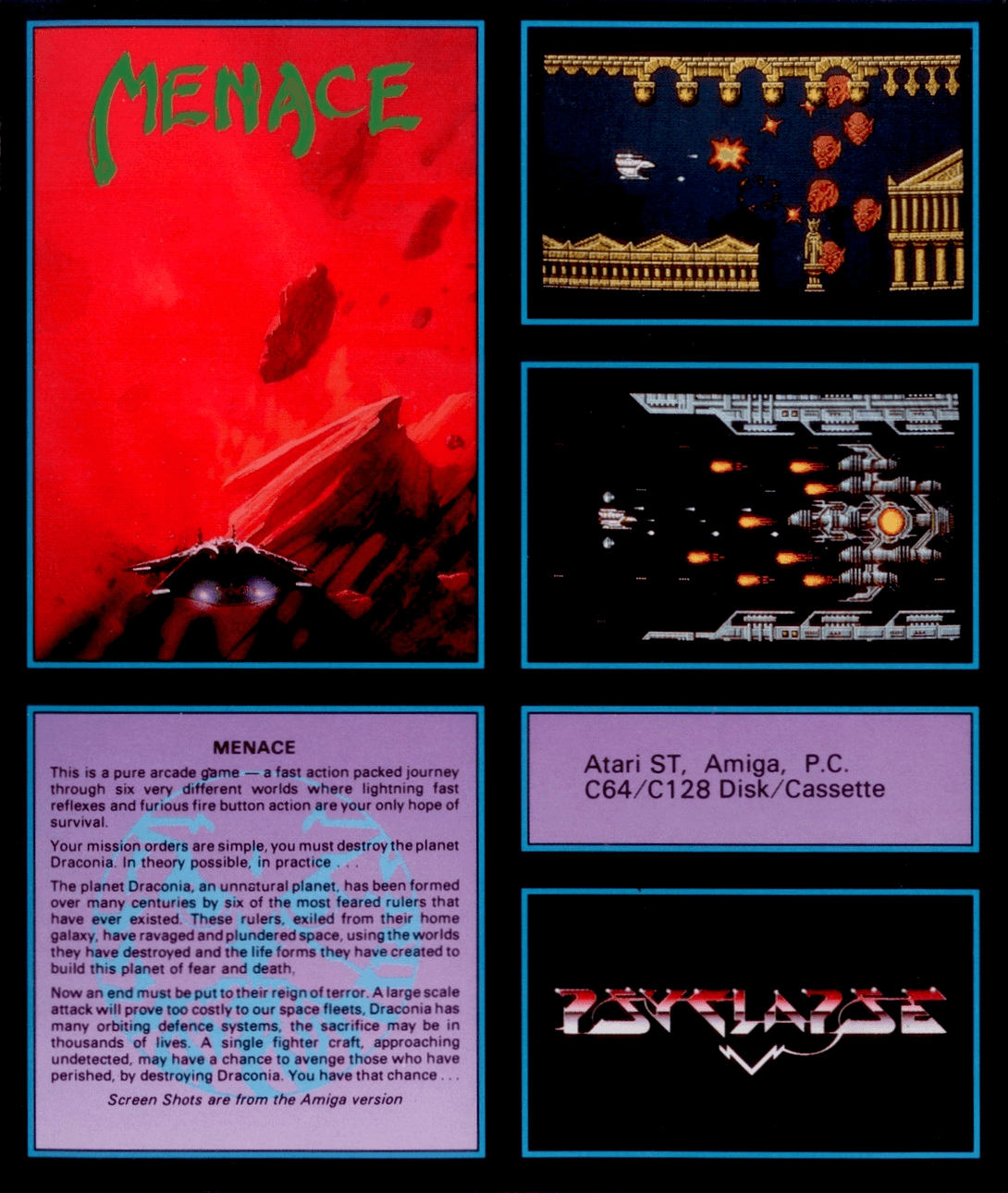 Description
Six ruthless dictators have collaborated to create the planet Draconia, which contains some of the most gruesome and harmful life-forms imaginable, all indulging in some rather unsavoury actions. Thus, you must go in your spaceship to destroy them all.

The game is a side-scrolling R-Type-influenced shoot 'em up consisting of six visually-diverse levels. Waves of enemies come towards you to be shot, and reveal tokens, which when shot at will cycle through several available weapons. These include lasers, cannons, improved ship power and a shield.

Cancelled port
Harlequin Software was preparing an Atari 8-bit conversion in 1990, but serious illness to the programmer prevented it from being completed.

Development
DMA Design was founded in 1987 by David Jones [of Grand Theft Auto fame], Russell Kay, Steve Hammond and Mike Dailly, in Dundee, Scotland. Originally working under the name Acme Software, they began developing games for the Commodore 64 and Amiga.

Jones began developing Menace under the working title CopperCon1, in his bedroom at his parents' house. He was attending the Dundee Institute of Technology at the time. To publish the game in 1988, Jones first approached Hewson Consultants, where Andrew Braybrook played the game and recommended it to Hewson.

When Jones was informed that Hewson wanted the game to be the "Amiga version of Zynaps", he realised that sales would be limited, and refused to sign the contract; despite this, Hewson had already promoted the game in Popular Computing Weekly, before the deal was officially dropped. After signing a publishing deal with Psygnosis, Acme Software was renamed DMA Design.

Tony Smith worked on some of the game's backgrounds and graphics, while Jones designed the levels.[6] Jones decided for Menace to be a side-scrolling game after playing arcade games such as Nemesis (1985) and R-Type (1987).

Psygnosis could not decide a preference for the design of the player ship; as a result, Smith often re-designed the ship with many variations.[6] The team found difficulty porting the game to the Atari ST, due to the hardware's limitations with smooth scrolling.

Brian "Biscuit" Watson, who the team met at a computer club in 1984, discovered a technique to overcome this difficulty. Other limitations included the fewer colours available with the hardware; Smith adapted his designs accordingly. After completing his own game, Kay was assigned to port Menace to PC.

At the end of development, the game was known as Draconia, before being renamed to Menace shortly before release, upon discovering that another game had the same title.

It was published in 1988 for the Amiga, and in 1989 for the Atari ST, Commodore 64 and DOS. The game generated a considerable amount of money for DMA Design, allowing the company to develop more games. The game sold 20,000 copies, reportedly generating around £20,000.

Name drops
Originally, the levels in Draconia had names such as "Irem Battlestation", "Konamian Graveyard" and "Jungles of Capcom", in reference to the famous coin-op shoot'em'up makers.

This was changed at the last minute, along with the title of the game, but not before the July 1988 issue of Commodore User had managed to review it.