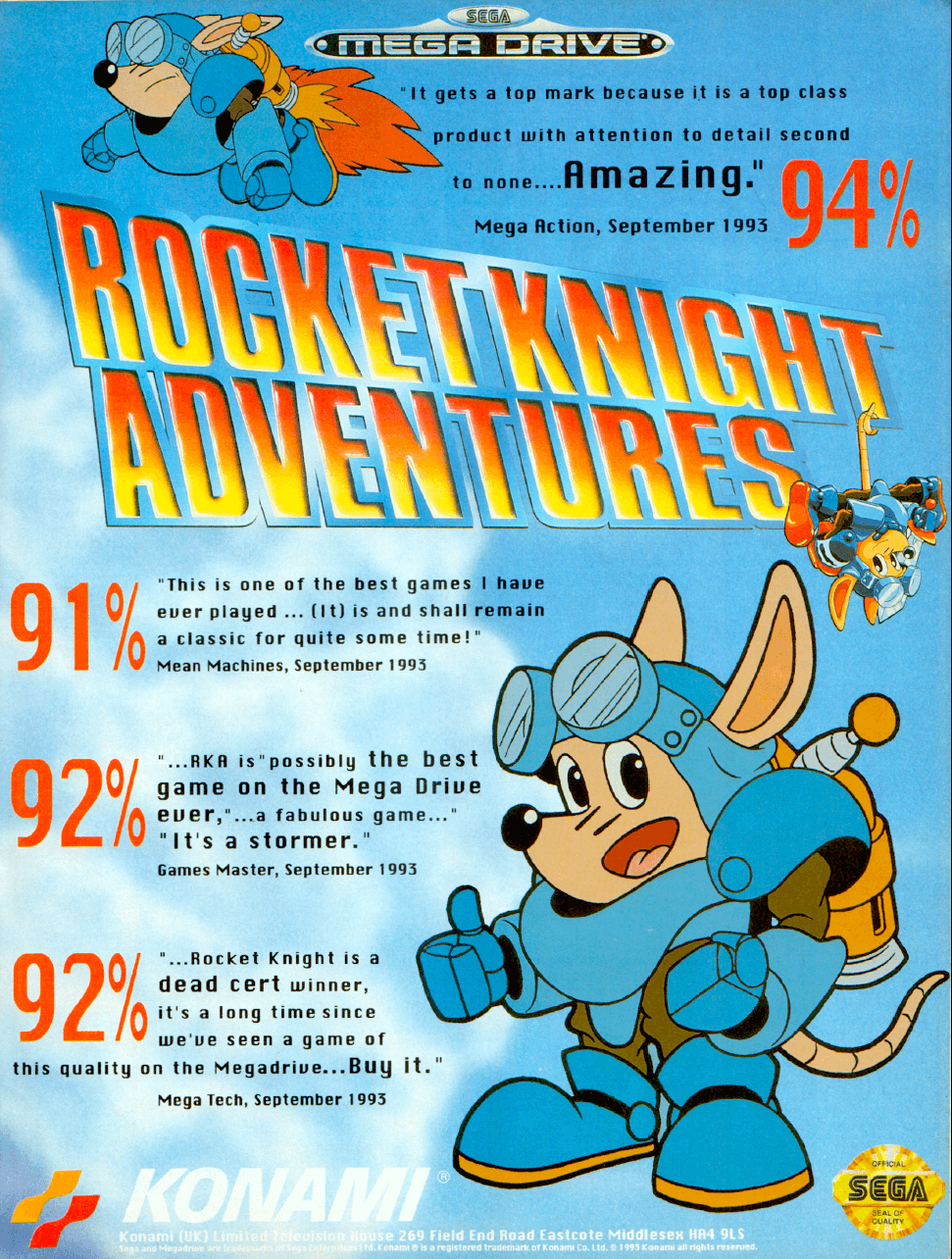 [Description] Rocket Knight Adventures is the first side-scrolling action game starring Sparkster. He lives in the kingdom of Zebulos, and is the bravest of all the Rocket Knights. One day, an army of pigs comes down to invade the kingdom and capture the princess. It is up to Sparkster to set things right again.

Most of the gameplay in Rocket Knight Adventures involves using Sparkster's rocket pack and sword. Sparkster has to fight off many bosses and survive many precarious situations. The levels are interspersed with a variety of elements, like shooting stages, and giant robot combat.

A SNES version of Rocket Knight Adventures was planned, but was never released.

Two follow-up titles Sparkster: Rocket Knight Adventures 2 on the Mega Drive, and a Sparkster on the SNES were released. Despite both games were produced simultaneously and sharing the same name and box art, they were different games, sharing only their character design and music score, with the Mega Drive release acting as a direct sequel and the SNES game being a spin-off. The two titles are often confused for being the same game due to the "Rocket Knight Adventures 2” subtitle only being employed in Japan.

In October 2009, Konami announced they would release another sequel, titled Rocket Knight (which is the sequel to the Sega Megadrive/Genesis game called Sparkster: Rocket Knight Adventures 2, but not really a remake of the Sega Megadrive/Genesis game called Rocket Knight Adventures), made by the British developer, Climax Group. The game was released on Xbox 360, PlayStation 3 and Steam on May 12, 2010. Nobuya Nakazato was not involved with this title in any way,[1] though Nazakato was credited by the developers in the Special Thanks section of the game credits.

[References] Sparkster has appeared as a playable character in a few recent titles, such as New International Track & Field for Nintendo DS and Krazy Kart Racing for iPhone and iPod Touch. He also has cameos in Ganbare Goemon 2: Kiteretsu Shōgun Magginesu for the SNES, Snatcher for the Mega-CD, Jikkyō Power Pro Wrestling '96: Max Voltage for the SNES, Mitsumete Knight for the PlayStation, They was disguised by Pastel in TwinBee PARADISE in Donburishima for PC, and a figure resembling him also appears in an alternate ending to Contra: Shattered Soldier for the PlayStation 2, and as nonogram pixel on Pixel Puzzle Collection for the iPhone and Android.

[Comic] A Sparkster comic was written by Nigel Kitching in the UK-made Sonic the Comic. It was based on the Mega Drive/Genesis version of Sparkster. In an interview, Kitching said that Sparkster was the easiest game to adapt into a story, due to being similar to the Sonic the Hedgehog games. He was working on a second Sparkster story, but the plan was dropped when Fleetway were unable to obtain permission from Konami to use the character. 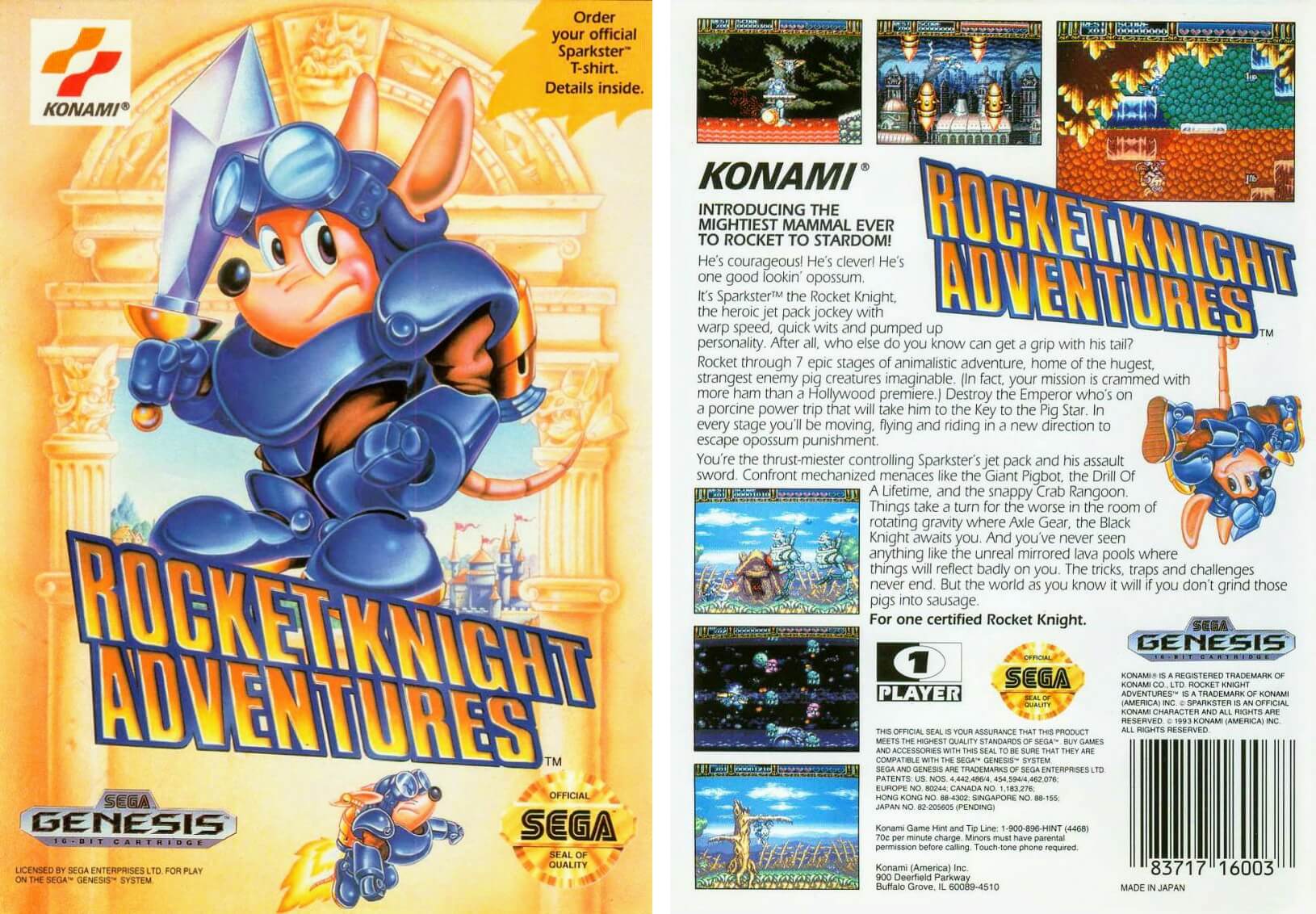