Sonic The Hedgehog 3 - Video Game From The Early 90's 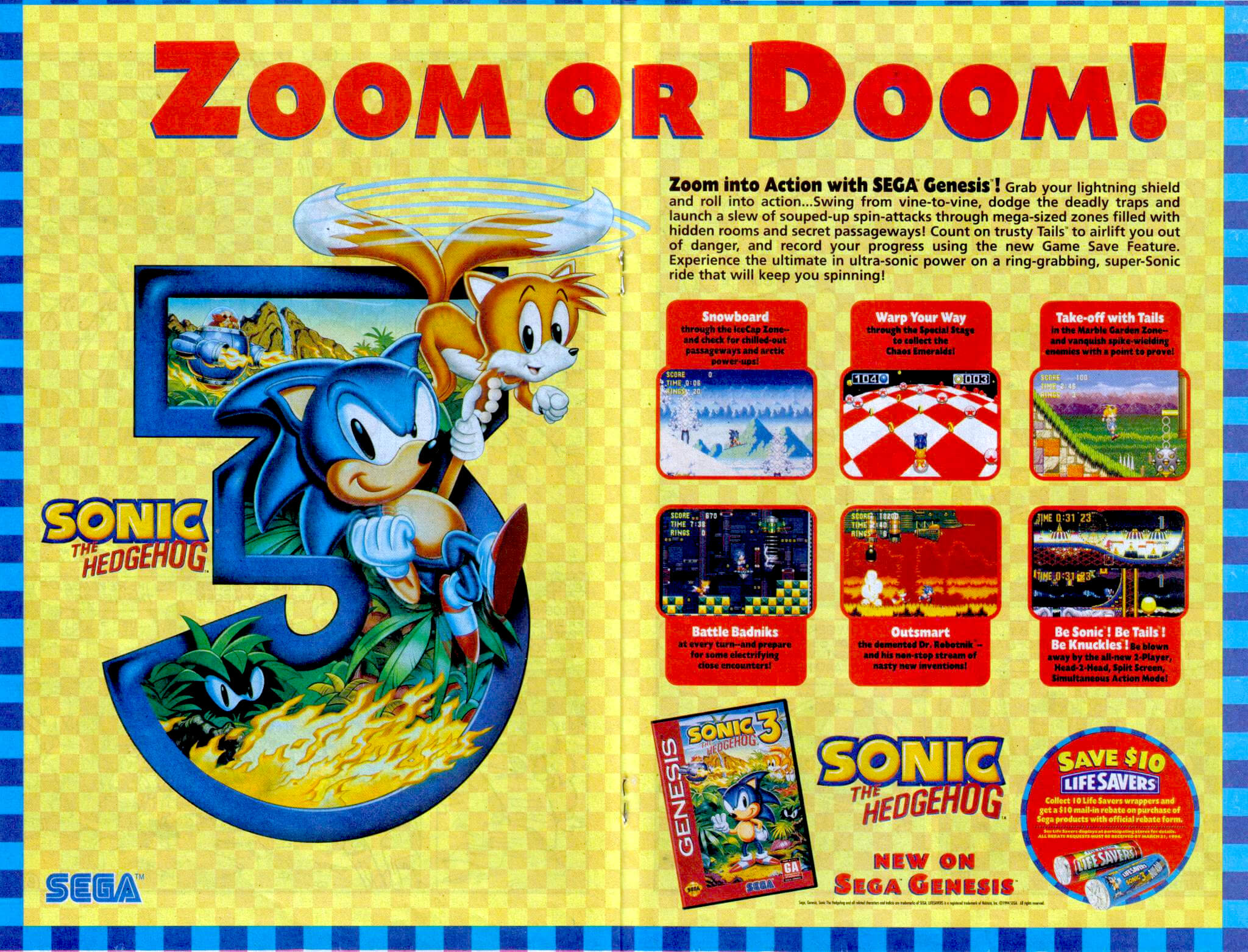 Plot
After Sonic and Tails defeat Dr. Robotnik in Sonic the Hedgehog 2, Robotnik's space station, the Death Egg, crash-lands on the floating Angel Island. There, Robotnik meets Knuckles the Echidna, the last member of an ancient echidna civilization that once inhabited the island. Knuckles is the guardian of the Master Emerald, which grants the island its levitation powers. Robotnik dupes Knuckles into believing Sonic is trying to steal the Master Emerald, turning the two against each other while he repairs the Death Egg.

Sonic 3 & Knuckles
Sonic the Hedgehog 3 and Sonic & Knuckles were intended to be a single game, but were released separately due to time and financial constraints. The Sonic & Knuckles cartridge features a "lock-on" adapter that allows other Genesis cartridges to be physically attached to it. Connecting the Sonic 3 cartridge creates a combined game, Sonic 3 & Knuckles. The lock-on function is available in some digital releases of the games, such as the Virtual Console service for the Wii.

Sonic the Hedgehog 3 & Knuckles allows the player to play Sonic 3 levels as Knuckles or Sonic & Knuckles levels as Tails or both Sonic and Tails. Other new features are the ability to collect Super Emeralds, unlocking new "Hyper" forms for Sonic and Knuckles and a "Super" form for Tails, improved save options, access to new areas that Sonic or Tails could not previously access, altered boss forms, and an additional ending that shows Sonic returning the Master Emerald to Angel Island.

Development
After the completion of Sonic the Hedgehog 2, Sega Technical Institute (STI) split into two teams: one comprised Japanese developers, and the other Americans. The Americans worked on Sonic Spinball, while the Japanese developed Sonic the Hedgehog 3. Yuji Naka and Hirokazu Yasuhara were the primary creators of the Sonic 3 design document and project schedule. Naka selected the majority of the team, while STI director Roger Hector oversaw development.

Development began January 1993, with a deadline of February 1994, when Sega and McDonald's would launch a major promotional campaign. Initially, the team used the new Sega Virtua Processor (SVP) chip, allowing for 3D graphics. They created a prototype with isometric graphics with the working title Sonic 3D; the original special stage featured a polygonal Sonic in a figure eight-shaped stage. However, when it became apparent that the SVP would not be finished by 1994, Sonic 3 was restarted from scratch as a more conventional 2D platform game. The isometric concept was eventually used for Sonic 3D Blast in 1996.

According to Naka, the team felt that they needed a deeper story to expand the world of Sonic, which "made the project huge". Thus, the levels are triple the size of those in Sonic 2. Many elements were conceived during the development of Sonic 2 but deferred to Sonic 3. Sonic 3 and Sonic & Knuckles were originally planned as a single game. However, time was limited and the manufacturing costs of a 34-megabit cartridge with NVRAM would have been prohibitively expensive. Due to the game's scope and the impending McDonald's promotion, the team reluctantly split it in half, allowing more time to develop the second part and splitting the cost between two cartridges. The Sonic & Knuckles cartridge's lock-on technology was implemented so Sonic 3 could be experienced as intended.

Hector said Sonic 3 had a troubled development. He recalled having to prevent the rest of Sega from bothering the team while simultaneously making sure the game would be finished in time. Additionally, Hector struggled to balance resources between Sonic 3 and other projects, Naka was sometimes seen as a harsh leader, and STI staff not on the Sonic 3 team became jealous of the high priority given to the game.

Michael Jackson's involvement
In 2005, Hector stated that Sega hired American pop musician Michael Jackson, a fan of the series,:292 to compose music for Sonic 3. According to Hector, Jackson's involvement was terminated following the first allegations of sexual abuse against him; his music had been already been implemented and had to be quickly reworked by Howard Drossin. The website of musician Cirocco Jones, who contributed music to Sonic 3 under the name "Scirocco", credits himself along with Jackson and Jackson collaborator Brad Buxer for musical cues for "levels 2 & 3" of "Sonic the Hedgehog". Sonic co-creator Naoto Ohshima said Jackson recorded an a cappella demo tape for the game, but that Sega was unable to use the compositions due to "various incidents".:301 He added that Sega probably still had the demo tape.

In a 2009 interview with French magazine Black & White, Buxer stated that Jackson had been involved with some Sonic 3 compositions, but chose to remain uncredited because he was unhappy with the sound capabilities of the Genesis. He also said that the Sonic 3 credits music became the basis for Jackson's 1996 single "Stranger in Moscow". In 2013, fans discovered that the musical theme for IceCap Zone closely resembles a previously unreleased 1982 track, "Hard Times", by the Jetzons, for which Buxer was the keyboardist and co-songwriter. An anonymous source involved in development told GameTrailers that Jackson's contributions remained, such as in the theme for Carnival Night Zone, and that Jackson had chosen to remain uncredited. In 2019, GameRevolution's Alex Donaldson noted that Sonic 3 had been rereleased less frequently since Jackson's death in 2009, and speculated that this was due to legal problems with his estate.

However, Sega staff including senior producer Mike Latham, marketing director Al Nilsen, Sonic 3 marketing director Pam Kelly, and Sega of America president Tom Kalinske stated that any involvement of Jackson was arranged without their knowledge, and that no contracts nor formal agreements were made. In 2013, Hector stated that any similarities to Jackson's music in Sonic 3 were unintentional. Journalist Ken Horowitz raised questions about Jackson's alleged involvement, such as how an agreement between Sega and Jackson could have been kept secret from the media, why Sega's marketing never mentioned Jackson's involvement, and why Jackson would reuse music originally composed for a video game. 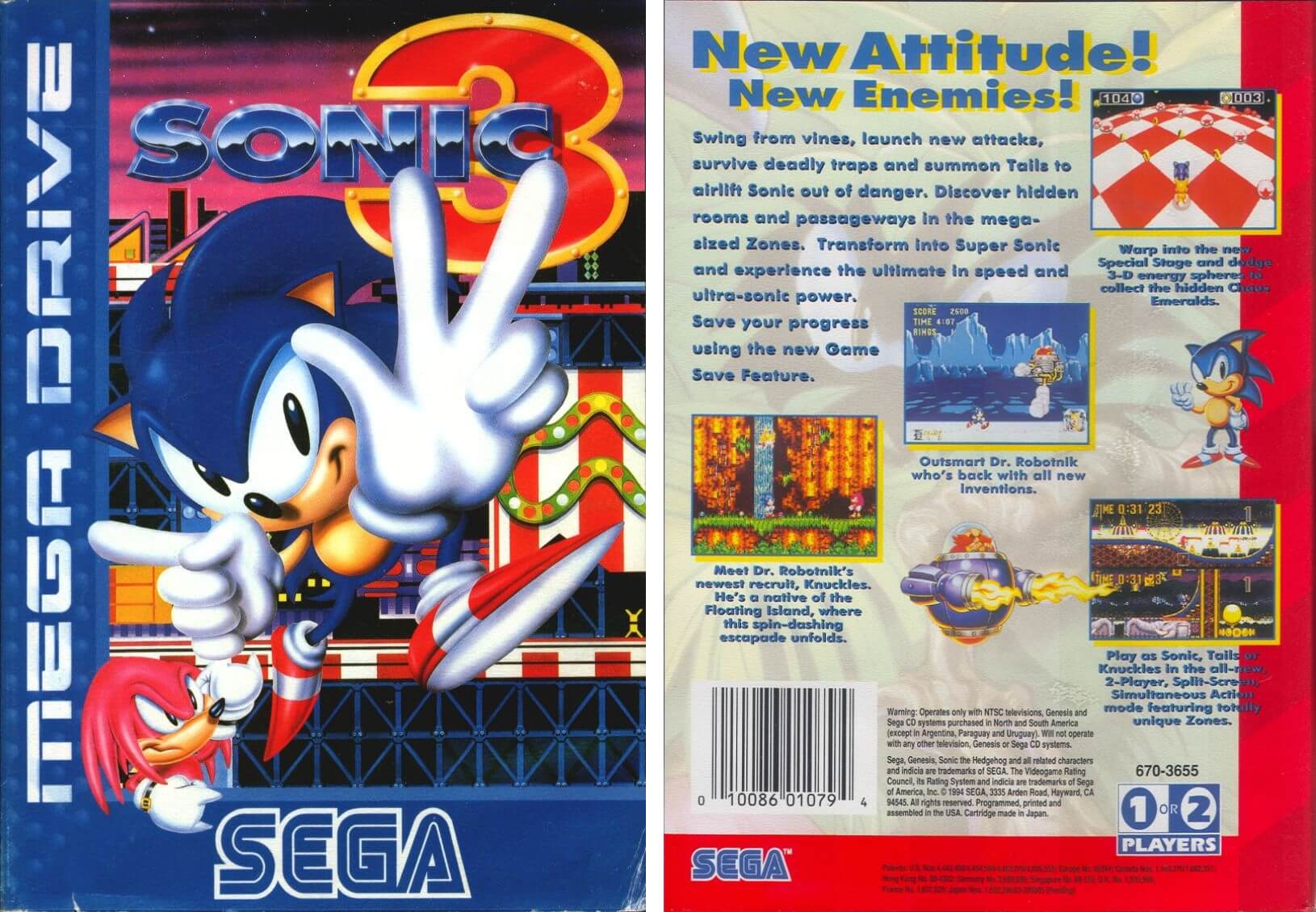 Release
Sonic 3 was released in North America on February 2, 1994, in Europe on February 24, and in Japan on May 27. To promote the European release, the British band Right Said Fred adapted their song "Wonderman" to include references to Sonic. The song was used in the game's advertisements and was also released as a single, which charted in the UK at number 55. A single-cartridge version of Sonic 3 and Sonic & Knuckles, Sonic the Hedgehog 3 Limited Edition, was canceled. A prototype ROM image of this version was leaked in 2008.

The game is included in the compilations Sonic Jam (1997) for the Sega Saturn, Sonic & Knuckles Collection (1997) and Sonic & Garfield Pack (1999) for Windows, Sonic Mega Collection (2002) for the GameCube, Sonic Mega Collection Plus (2004) for the PlayStation 2, Xbox, and Windows, Sonic's Ultimate Genesis Collection (2009) for the Xbox 360 and PlayStation 3, and Sonic Classic Collection (2010) for the Nintendo DS. Most compilations feature the game largely unchanged. However, Sonic Jam introduces "remix" options: "Normal" mode alters the layout of rings and hazards, and "Easy" mode removes certain acts from the game entirely. Sonic & Knuckles Collection features a MIDI rendition of the game's soundtrack, with certain levels featuring completely different music. Sonic 3 will not be included in the Sega Genesis[/Mega Drive] Mini (2019), a dedicated console containing 40 Genesis[/Megadrive] games. AtGames, which was briefly involved with the product's development, said the exclusion was due to licensing problems with the soundtrack.

Sonic the Hedgehog 3 was released for the Wii Virtual Console in September 2007 and Xbox Live Arcade on June 10, 2009. The Xbox version was developed by Backbone Entertainment and has enhanced graphics for high-definition, online leaderboards, support for multiplayer via split screen and Xbox Live, and a new saving system that allows progress to be saved anywhere during play. A PC version was released via Steam in January 2011, as Sonic 3 & Knuckles.

Legacy
The game served as the first appearance of Knuckles the Echidna, who would be featured prominently in future Sonic games. Issues 33 and 34 of Sonic the Comic and issue 13 of the Archie Sonic the Hedgehog comic consisted of their own comic adaptations of the game.

For Sonic's twentieth anniversary, Sega released Sonic Generations, a game that remade aspects of various past games from the franchise. The Nintendo 3DS version of the game features a remake of the game's final boss, "Big Arms". Additionally, a re-arranged version of the "Game Over" theme appeared in the game. A re-imagined version of the Hydrocity stage, along with the Blue Sphere bonus stage, and a glimpse of Angel Island (just before Green Hill begins) appears in the 2017 game Sonic Mania.