The Lawnmower Man - Video Game From The Early 90's 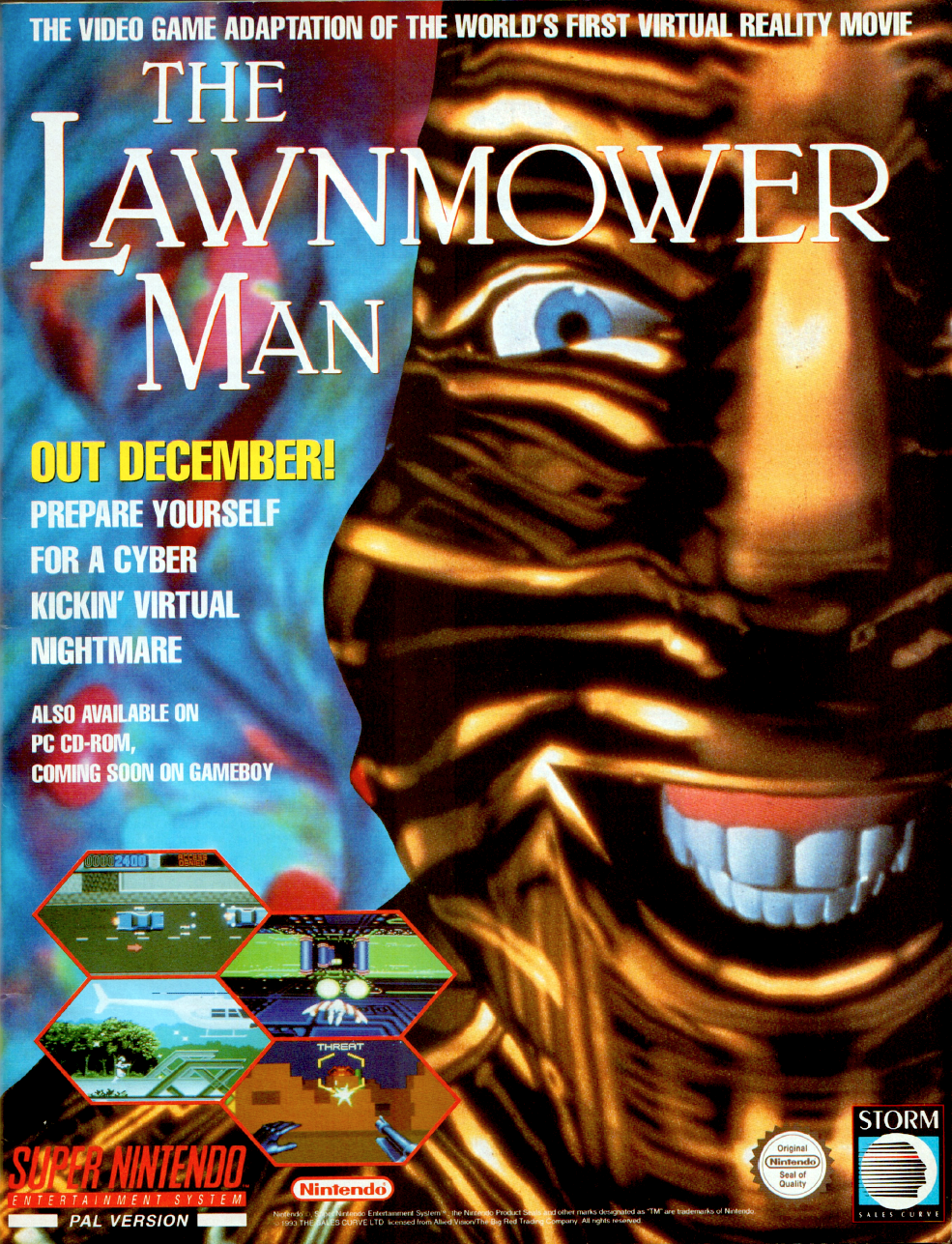 Description The Lawnmower Man is the game based on the 1992 movie of the same name (itself loosely based on a Stephen King short story) starring pre-Bond fame Pierce Brosnan as Dr. Lawrence Angelo, a scientist working for Virtual Space Industries in "Project 5", a secret research that attempts to increase the intelligence of primates using psychotropic drugs and VR training.

While the CD version of the game (PC, Sega CD) is an interactive movie, all three cartridge versions are platformers. The player takes control of either Dr. Angelo or Carla Parkette (the mother of Jobe's best friend) in typical side-scrolling shooting action, similar to Contra and Metal Slug. The player collects weapon upgrades or data discs. Once the player has collected a number of data discs, the discs morph into a Virtual Suit that gives the player protection from one hit.

The player visits several locations seen in the movie, such as Harley's Gas 'Er Up and the VSI headquarters. The game includes true 3D level connectors that are based on the CG sequences of the movie. These involve avoiding obstacles and the occasional high-speed shooting in the VR world. There are four different levels (Virtual World, Cyber War, Cyber Run and Cyber Tube), and each takes a slightly different approach.

Virtual World is set in first person and the objective is to dodge obstacles such as trees and arches to get to the exit. Cyber War is similar to Virtual World, but with some shooting stops. Cyber Run is set in the third person and requires occasional shooting of obstacles, while Cyber Tube involves fast travel and plenty of enemies in a VR tunnel.

The twists of the game are true-3D level connectors, based on the CG sequences of the movie, usually all involving avoiding obstacles (and the occasional shooting) at high speed in the VR world. There are four different (Virtual World, Cyber War, Cyber Run and Cyber Tube), each taking a slightly different approach (Virtual World is seen in first person, the objective being dodging obstacles such as trees and archs and reach the exit, Cyber War similar to Virtual World but with some shooting stops, Cyber Run is seen in third person and requires occasional shooting of obstacles, while Cyber Tube is a fast travel with plenty of enemies in a VR tunnel).

Sequel In late 1995, SCi released a sequel for MS-DOS and Macintosh computers known as CyberWar. Copies of the sequel are quite rare, as it had a limited release by Interplay instead of the publisher of the first game, Time Warner Interactive. CyberWar splits from the story of the second movie, Lawnmower Man 2: Beyond Cyberspace, and has its own story.

In early 1996, rumors of a third Lawnmower Man video game were spread via chatrooms and video game magazines such as Next Generation and Electronic Gaming Monthly's Quartermann column. The rumors suggested a release for Sega Saturn, Sony PlayStation and Nintendo 64, but no further sequels were produced and no further news has been reported by these publications. 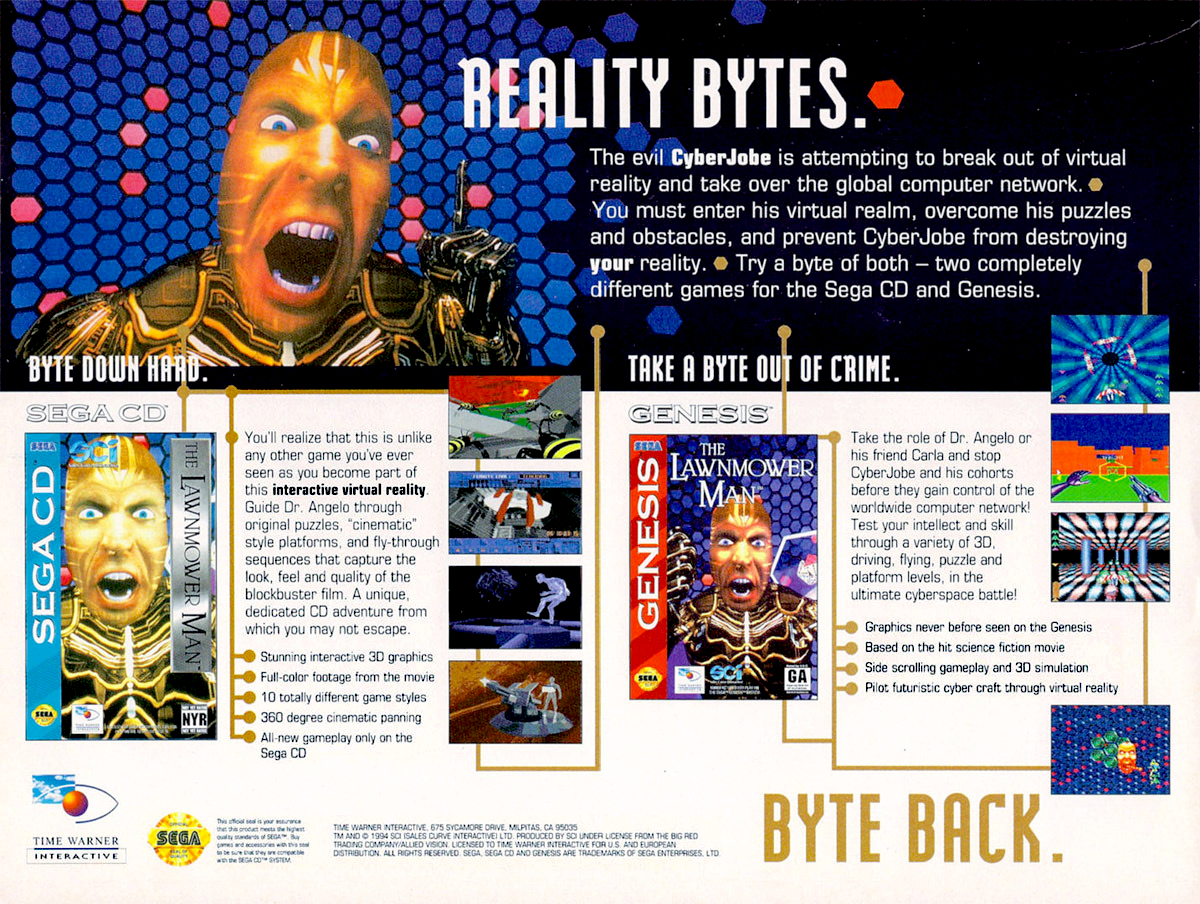 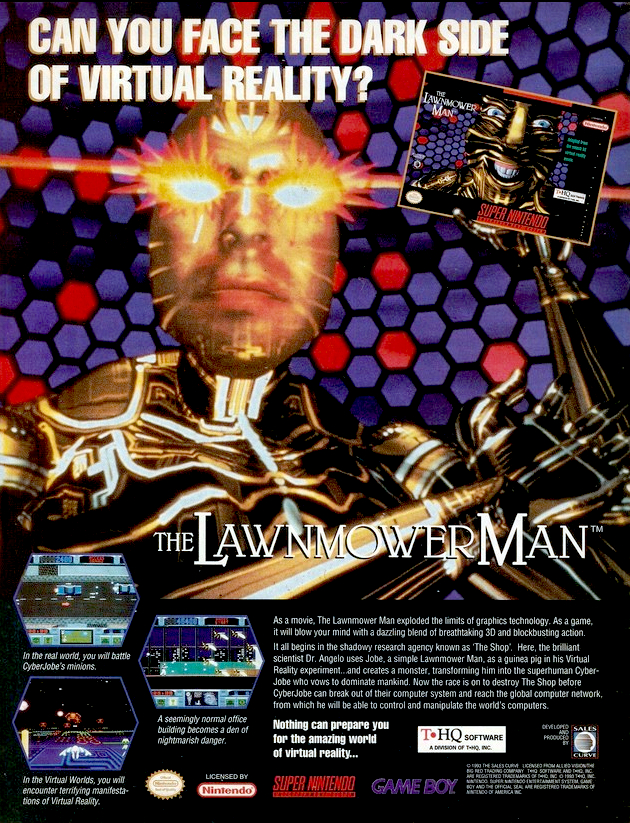