As in the movie (and the more famous graphic adventure), your task is to find the Holy Grail. Before this can be done you must find the Cross of Coronado, a shield and a diary.

This makes for a four-level arcade adventure combining climbs, exploration (with several routes through each level, and some traps) and puzzles. Indy is armed with his trusty whip to fight off foes, but can also get involved in hand-to-hand combat.

The first level takes place in caves underneath Colorado, before you reach a moving circus train strewn with traps, a Zeppelin which is full of guards and ladders, and then Castle Grunwald in Austria. 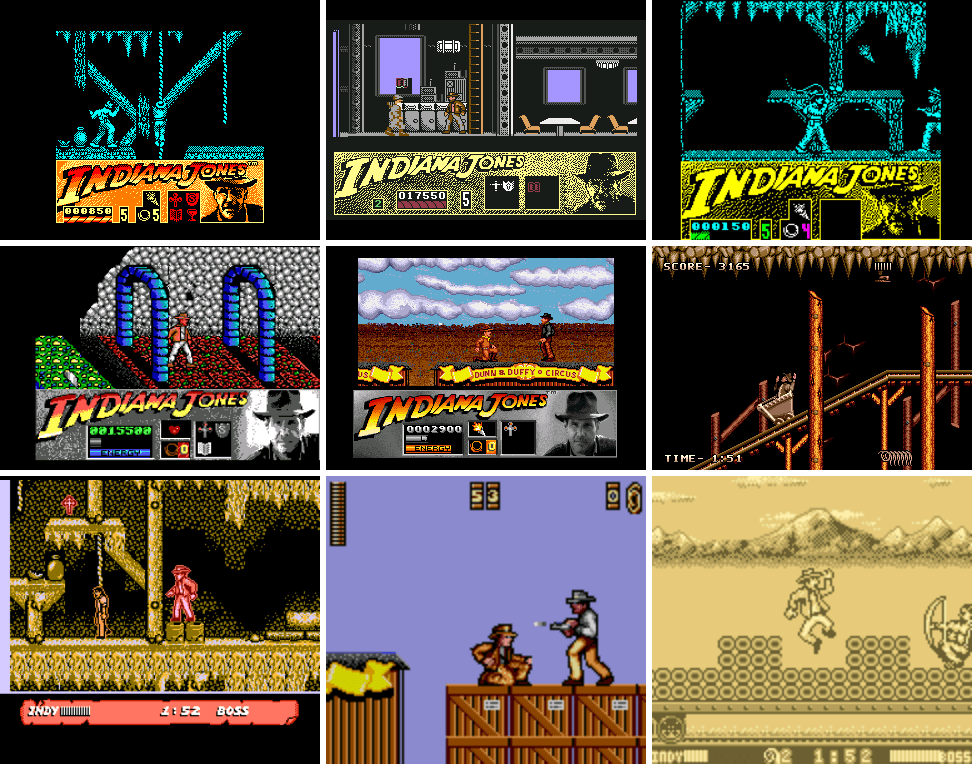 It is 1938 and adventurer Indiana Jones is joined by his father on this quest, preventing Adolf Hitler from capturing the Holy Grail. He will have to deal with Nazi guards, the Luftwaffe and enemy spies as he tries to stop the tyrannical Nazi leader.

The Graphic Adventure uses the same SCUMM gameplay system as the previous Maniac Mansion. Most of the screen is used for a visual rendition of the current scene. At the bottom of the screen are words, which can be clicked on using the mouse to activate their functions. For example, objects can be picked up, used, pushed or pulled, and turned on and off. Most locations are from the movie, but some further scenes are added.

In keeping with Indiana's action-man persona, the game also features pure action scenes. Unlike most Lucasfilm adventures, you can die.

Although its based on the movie, the game does take same liberties. There are three possible endings, and several "alternate" ways to get from one point of the story to another (ie. when the Jones have to go to Alexandria).

Trivia
Two PC versions of the game were released, one with 16 color EGA graphics, and one with 256 color VGA graphics.

Credits
The credits are randomized so that each of the three main designers gets "top billing" at one point or another.

Dialogues
Dialogue between Indy and other NPCs plays a crucial role in the progression of this game. According to the folks at Lucasfilm, every dialogue situation can be solved either by talking your way out of it, or by resorting to fistfighting.

Extras
The package contained the "Holy Grail Diary". It contained essential information for solving the holy grail puzzle at the end of the game.

German version
In the German version of the game all Third Reich insignia were repainted and made invisible. (Remember the scene, where Hitler signs the diary for example - there is not a single swastika around in the German version.) That's because in Germany no toys are allowed to wake resemblances to Hitler's regime. And computer games are (legally) toys. There is one overlooked instance in which swastikas are still seen: when a guard is knocked out during a fist fight, stars in swastika form appear over his head.

Indy Quotient
Indiana Jones and The Last Crusade: The Graphic Adventure was the first of two graphic adventures by LucasArts to incorporate an IQ (Indy Quotient), which was a scoring system (the second was Fate of Atlantis). There were many different ways of completing the game.

Sequel
A second Indiana Jones graphic adventure, Indiana Jones and the Fate of Atlantis, was released in 1992 for DOS, Amiga, and Macintosh.

Two supposed successors to Fate of Atlantis, namely Iron Phoenix and The Spear of Destiny, were canceled.[11]