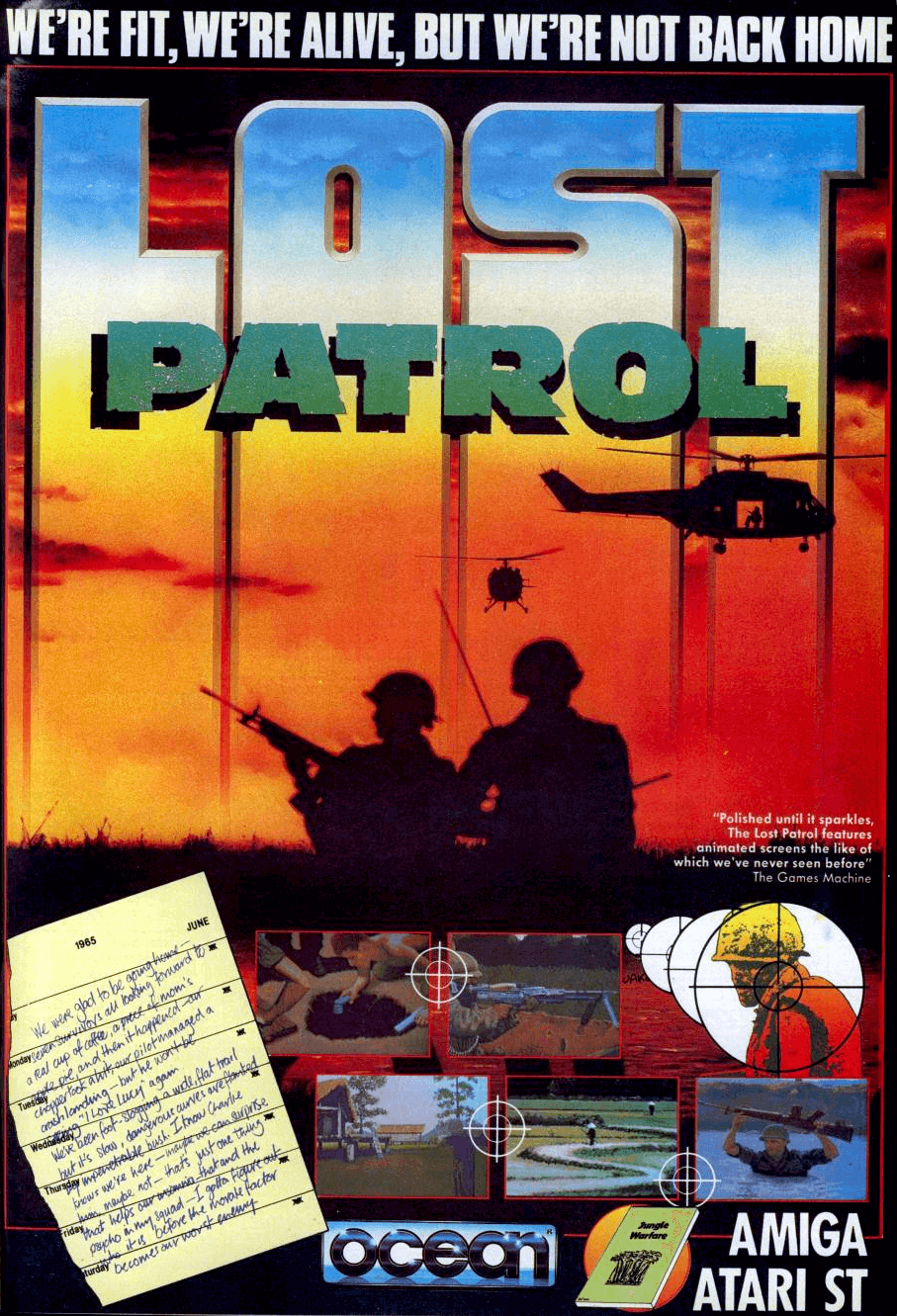 Description
You and your squad are on their way back from R&R in Saigon to your operations base when Viet Cong guerillas force your helicopter to crash land in the Central Highlands of Vietnam. It's now your responsibility to lead the remaining survivors to the nearest U.S. base, evading or facing an elusive and dangerous enemy on his own grounds.

Most of the time, you'll see a map of the country on the screen and navigate your men through the country. It's important to watch your men's health and morale by getting them food, water, ammo and letting them rest, etc. When reaching certain spots on the map, e.g. a native village, the game presents the current situation in a nice graphic scene.

Sometimes you'll run into V.C. snipers, patrols, whole ambushes or encounter minefields. Then the game offers some small arcade sequences like firing your guns or fighting it out in desperate hand-to-hand combat. The progress of your party is accompanied by video sequences from the Vietnam War.

Development and release
"Development took over a year, but the main stumbling block was Ocean themselves. The problem was that they were bringing out games like Batman that were strongly arcade titles and trying to get us to mold Lost Patrol to that kind of arcade structure.

We on the other hand wanted a deep, realistic game that echoed some aspects of early text-based adventures and required that you interact constantly with your team and those you met. It was always a struggle and we came in months late on completion because of trying to resolve the way we saw the game and the way that Ocean did.

A day in my life at the time was split between going to the library, watching war films and buying research books and doing the actual drawing. Each screen took about 3 days to complete, 12-14 hours a day, a pixel at a time." Ian Harling

Lost Patrol began as an idea to make a game in the style of Cinemaware's 'interactive movie' titles but with more gameplay, and the designer and artist Ian Harling even sent a game concept to Cinemaware and six other companies but was rejected, until Ocean Software's Gary Bracey accepted it in early 1989 when they decided to move on to the 16-bit market.[1] Lost Patrol was originally intended by Ocean as a follow-up to their 1987's Platoon[3] and was thus initially subtitled Platoon II.

Upon reading more about the atrocities of the Vietnam War, Harling decided to incorporate moral dilemmas into the plot. Several segments were changed or abandoned altogether due to technical limitations and other reasons, such as the tunnel sequence which was cut altogether.

Harling created the graphics using Deluxe Paint II, scanned hand-drawn images with photographic references, and digitized Vietnam footage stills for the Amiga as the prime platforms. His original 32-color graphics were then downgraded for the Atari ST.

The game was programmed by Simon Cooke, with whom Harling had previously worked on an unreleased game, Xenodrome. Nick Byron aided them with ideas and additional coding and also created the hand-to-hand sequence.

There was a widely pirated, leaked Amiga version of the game that was incomplete, buggy and prone to crash. Lost Patrol was also later ported to the PC DOS by Astros Productions. The main theme playing throughout the game was composed by Chris Glaister.