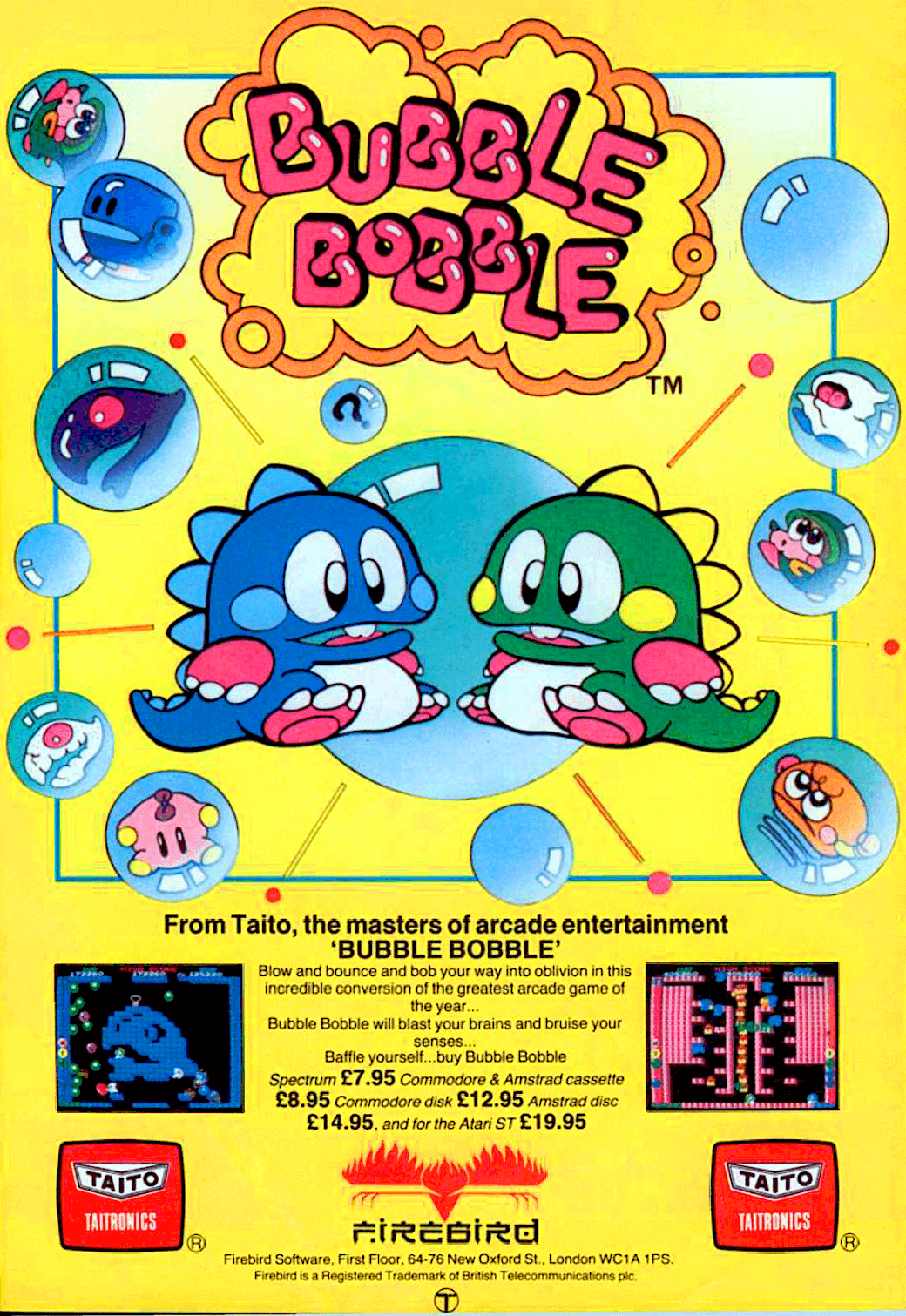 Of the original 8- and 16-bit ports, the MSX2, NES/Famicom Disk System, Game Boy and Master System ones were made by Taito itself (though the Master System version was published by Sega instead of Taito). The Game Gear port (which emulates the Master System version of Bubble Bobble) was done by South Korean developer Open Corporation. The Commodore 64, Spectrum and Amiga versions were developed by Software Creations and published in the UK by Firebird Software. Most of the other computer ports were made by US-based Novalogic with the exception of the X68000 game in Japan that was done by Dempa Shinbunsha. The Game Boy Color version was co-created by the video game developers Dreams and I.T.L.

The X68000 version of Bubble Bobble includes a secret "Sybubblun" mode, which contains 20 very difficult levels with the characters changed to those from Syvalion, another game designed by Fukio Mitsuji.

In 1996, Taito announced that they lost the original source code. As Probe Entertainment was in charge of the home conversions, Taito sent them a Bubble Bobble arcade PCB so they could play the original game and reproduce its mechanics. This led to the release of Bubble Bobble also featuring Rainbow Islands for Saturn, PlayStation and PC in 1996, published by Acclaim Entertainment.

In the Game Boy and Game Boy Color versions, since the Game Boy is in its nature a single player device, the storyline involves Bub looking for "Moon Water" to cure his brother. They are known as Bubble Bobble and Classic Bubble Bobble respectively.

In October 2005, a version was released for the Xbox, PlayStation 2, and PC as part of the Taito Legends compilation of classic arcade games.

At the end of 2006, a new port for mobile phones in Europe and Japan was released.

On November 11, 2016, the game (alongside 29 other games) was included in the NES Classic Edition (known as the Nintendo Classic Mini in Europe).

A version also exists for the BBC Micro in the public domain though never officially released. According to one of the creators it was coded by them independently in 1988 as a clone of the C64 version, but when they approached publishers it was deemed that it would not be financially viable to release a licensed product for the BBC Micro at that time.

Cancelled mobile port Sometime in the early 2000s, Stephen Ruddy (author of the C64 conversion) attempted to port the game to mobile phones using Java. All 100 levels were copied across, including most of the movement patterns, but the game was never completed. This site has some video of what does exist.

In 2002 a homebrew version for the Texas Instruments TI-8x series of calculators was released.

Other media The Bubble Bobble characters have made cameo appearances in the manga Gamest Nª49: Gasmest Island Mokushiroku on October 1992 created by Shinseisha. Bub, from Bubble Bobble and Chack, from Chack'n'Pop, appeared in the manga Cha Kurun Desu (ちゃくるんです)[34] on May 2009. Bubble Bobble was featured in Episode 4, Season 3 of Black Mirror, "San Junipero" as a video game played by Yorkie in 1987 at the Tucker club. Bubblun from Bubble Bobble makes cameo in the manga High Score Girl by Rensuke Oshikiri, Published by Gangan Comics, on 2010.

Endings If you finished level 99 by killing the enemies you got the bad ending. You had to get the secret key which opened up another 120 or so levels.