The Great Giana Sisters - Video Game From The Late 80's 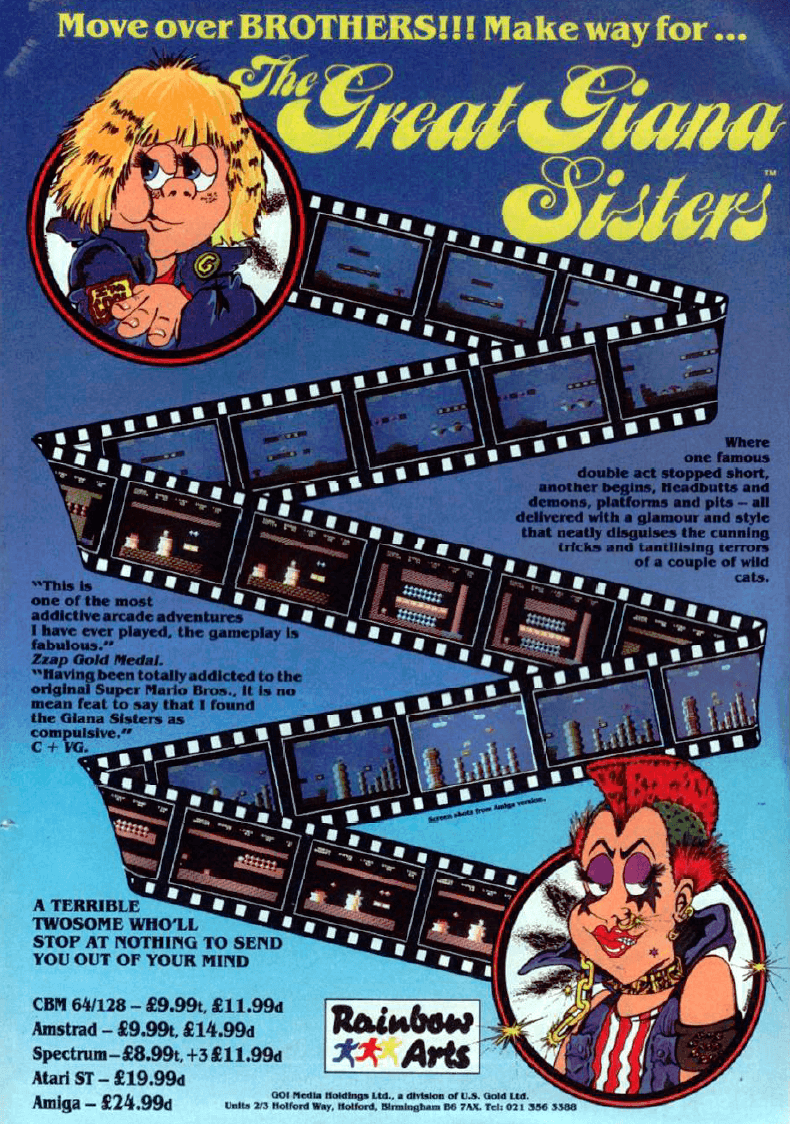 It is known for its controversial production history and its similarities to the Nintendo platform game Super Mario Bros., which prompted legal pressure against the producers of the game.

The scroll screen melody of the game was composed by Chris Hülsbeck and is a popular Commodore 64 soundtrack.

Development
The game was commissioned by the CEO of Electronic Arts, Marc Ulrich who requested a game similar to Super Mario Bros. There was a gap in the market as there were no games of that type available on home computers at the time. The development team based their new game on extensive play of the NES Mario title. It took around 6 or 7 months to write the game.

Problems with Nintendo
The game is almost an exact copy of Nintendo's Super Mario Brothers, with some additions. The play mechanics are almost exactly the same, and graphics are superficially similar.

While it is sometimes alleged that Nintendo sued Rainbow Arts and this led to the game being pulled out of the market, developer Armin Gessert stated in an interview (published in a "Classic Gaming" special by German magazine PC Action) that he did not know about any such legal action.

It was sufficient that Nintendo got in contact with Rainbow Arts, and let them know their view on the matter before possibly taking more drastic measures.

Time Warp Productions and Rainbow Arts immediately stopped the production and, at the same time, the game began vanishing from the stores. The difficulty in obtaining copies of the game has led to them being sought out as collector's items.

After being taken off the shelves, Giana Sisters was one of the most popular pirated games, though.

Many years later, Nintendo took a different, much more relaxed position concerning the Giana Sisters DS game according to Gessert.

Never released ports
Although the three versions featured here did (briefly) hit the shelves, no Spectrum version did. While one was definitely planned, some within the company claim that nothing was ever done towards it. If this is the case, Crash! magazine have some explaining to do, as not only did they review it, they gave it 90%.

An Amstrad CPC conversion was also planned and the situation is very similar. At least one magazine reviewed it (Amstrad 100 pour cent), this port is however circulating in unfinished form, apparently leaked.

Other ports
In 1993, Dutch developer Sunrise released a version for the MSX, programmed by Jan van Valburg. Unofficially, the game has been cloned on Windows, DOS, Linux, Mac OS X, AmigaOS 4, NetBSD, AROS, MorphOS, and Symbian OS. An unofficial clone of the Commodore 64 version was also made for the Nintendo DS.[10]

In 2009, a mobile version of the game, titled simply Giana Sisters, was released for Android phones, and appears in the Ouya's Discover Store at launch.

The Commodore 64 version was used as competition game in the qualifiers for the computer gaming contest in the UK in 1988. The game was played for high-score(s).

Sequels
Shortly after the release of The Great Giana Sisters, Time Warp began developing a sequel which was announced as Giana 2: Arther and Martha in Future World, a new game with a futuristic setting.

Due to the trouble caused by the legal pressure coming from Nintendo, it was deemed too risky for the small developer to once again produce a game associated with the Giana Sisters brand.

Time Warp renamed the game Hard'n'Heavy, and changed the game's protagonists into robots rather than the Giana sisters.

Hard'n'Heavy was released on the Commodore 64 and Amiga in 1989. 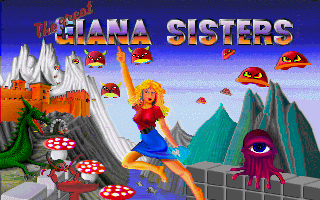