Toejam And Earl - Video Game From The Early 90's 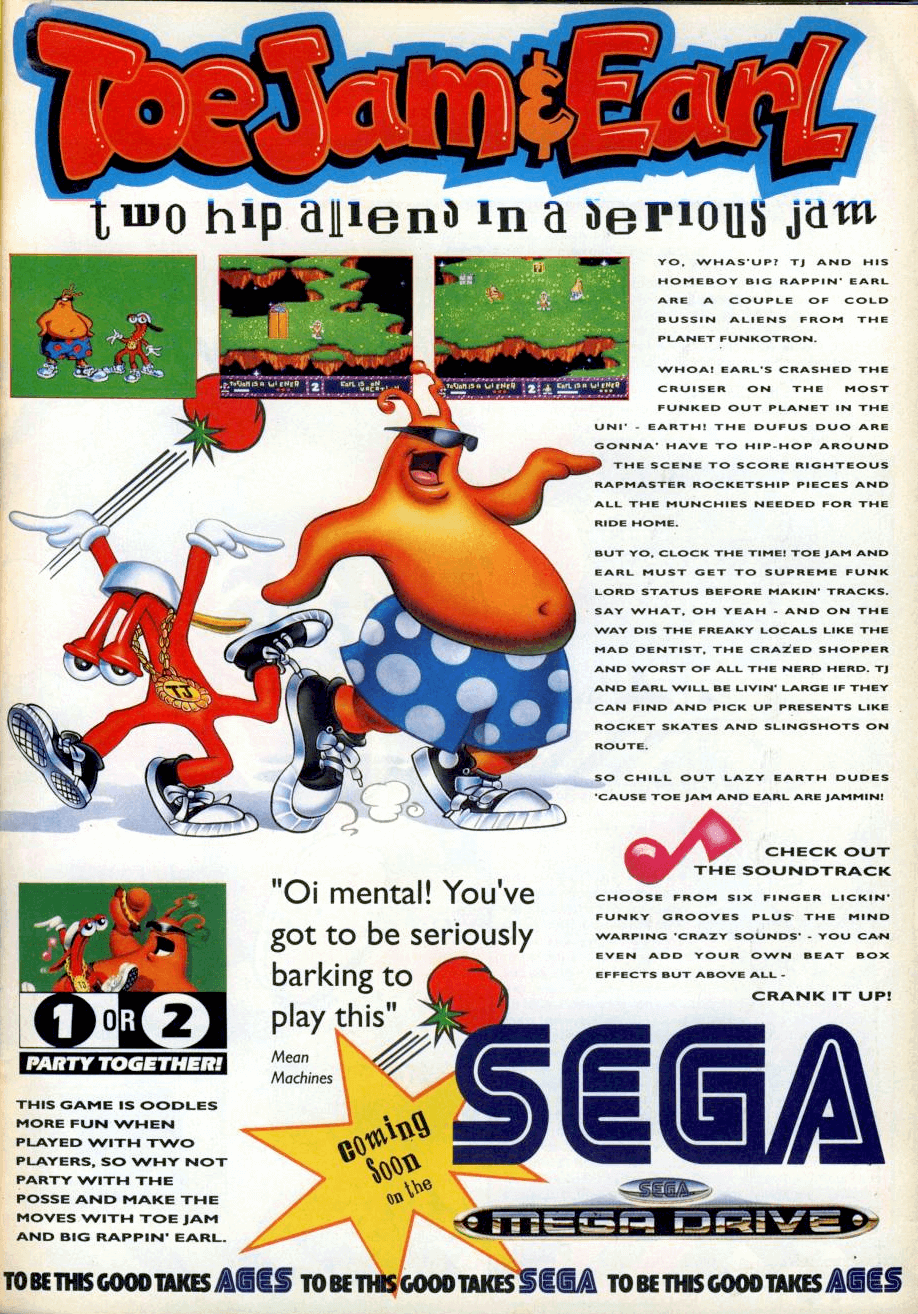 Description
Toejam and Earl are two hip aliens from the planet Funkotron. One day, they are cruisin' their galaxy in the sweet spaceship ride. Unfortunately, Earl wasn't paying enough attention to where he was driving, and ran the ship into an asteroid. The ship crash landed onto the most bizarre planet in the galaxy: Earth.

Toejam and Earl must travel from level to level on Earth and collect the 10 scattered pieces of the ship. But the various Earthlings, such as Nerd Herds, Giant Hamsters, Phantom Ice Cream Trucks and the Bogeyman will make that difficult.

The power up items that TJ and E can pick up come in the form of wrapped presents. You never really know what a power up is until you open it. What's more, randomized levels and item locations make it a different game every time.

The game features a dynamic screen splitting - screen joining 2-player mode. Players start the game close to each other. If one gets away from the other, the screen vertically splits to allow each player to move freely. When players are close again, the screens join together to become one single screen.

Development
ToeJam & Earl creator Greg Johnson became a fan of Rogue as a university student. After he left university, he worked on games for Electronic Arts, including Starflight (1986). After the completion of Starflight 2, Johnson conceived ToeJam & Earl—first the characters, then the plot—while on a beach in Hawaii.

The idea was a combination of Rogue's gameplay concepts and a lighter version of Starflight's science-fiction themes. Johnson met programmer Mark Voorsanger through a mutual friend, while walking on Mount Tam in 1989. He related the concept of ToeJam & Earl to Voorsanger, and the two resolved to make the game together.

They formed Johnson Voorsanger Productions, and serious work on the game began soon after. Their status as commercial game designers allowed them to meet with Sega of America, and they used cards covered in landscape drawings to demonstrate their idea of randomly generated levels. Sega marketing manager Hugh Bowen was immediately interested in the concept and he enlisted the aid of producer Scott Berfield to sell the game to management; Sega wanted innovative games and new mascots to compete with Nintendo.

The game's small development team was composed of Johnson's previous colleagues,[1] and its music was composed by John Baker. The team's goal was to make a humorous game that was "original, easy to understand and offered an immediate response to the player's actions". The designers wanted to include a two-player mode so that they could play together, and considered ToeJam & Earl "a two player game with a one player option."

While Sega believed that hardware issues would prevent the feature from working, Voorsanger successfully implemented it. In a 1992 interview with Sega Visions, Johnson stated that the characters ToeJam and Earl evolved as reflections of his and Voorsanger's personalities. Voorsanger disagreed, and called the characters "two different aspects of Greg's personality". Steve Purcell has stated that he contributed character designs to the game.

Legacy ToeJam and Earl became "one of Sega's second tier mascots, alongside Sonic" and one of the Sega Genesis's "key exclusive franchises". The characters appeared in a spin-off light gun game, Ready, Aim, Tomatoes, developed by Johnson Voorsanger Productions as one of six mini-games for the Menacer 6-game cartridge.

In early 1992, the developers began work on a sequel to ToeJam & Earl, and spent three months expanding on the original game's concept by adding indoor areas and more terrain types. Sega was not impressed by the sequel, and believed it to be unmarketable. The team redesigned it as a platform game, as Sega was inclined to publish games in this genre.

The game, titled ToeJam & Earl in Panic on Funkotron, was highly anticipated, and was a commercial and critical success when it released in 1993. However, fans of the original game were disappointed by the change in design to a perceived generic style.[1] Due to poor North American sales of the Sega Saturn, Sega's next generation video game console, the ToeJam & Earl franchise was neglected.

A ToeJam & Earl game planned for the Dreamcast was cancelled (a beta of the game was preserved, and on Christmas Day 2013 released on the internet by enthusiasts), but a third installment, Toe Jam & Earl III: Mission to Earth, was released for the Xbox in 2002. The release returned to the concepts of the original game, but generated mixed reviews and poor sales. A new ToeJam & Earl game is currently in development by HumaNature Studios.