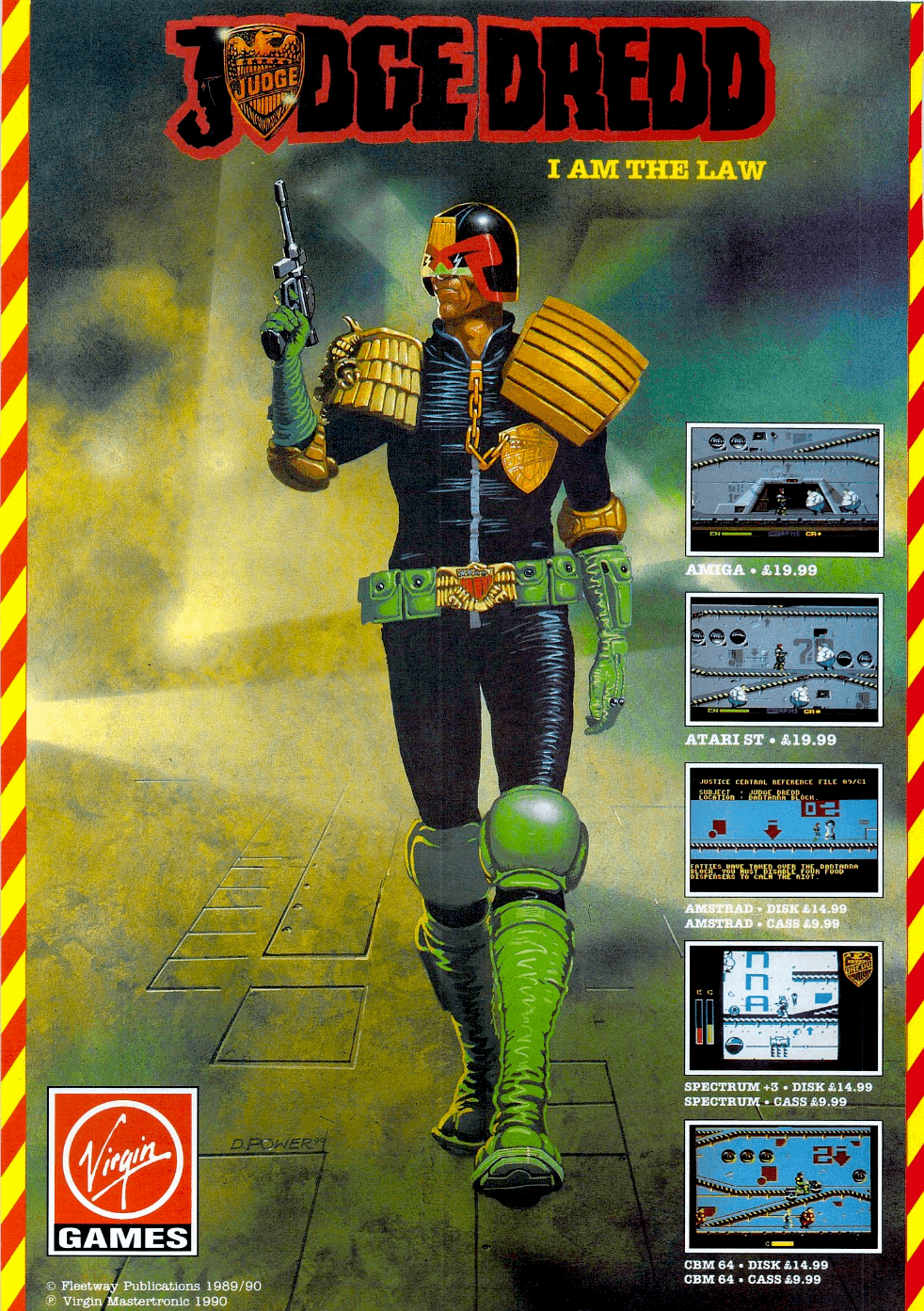 Description Just another day for Judge Dredd in Mega City One as he fights crime and tries to return the city back to some normality. You play the Judge as he tries to attempt six missions of crime. Once a mission is completed there is a bonus level related to the last mission to attempt. Take too long to complete a mission and the crime rate rises. Let the rate get too high and it's game over.

To aid the Judge you have various weapons to fire and also your Lawmaster bike. This allows you to move around faster but you can't fire your weapon or arrest people thus making the crime rate rise.

Judge Dredd is a side view platform game that scrolls as you move left or right. Pressing the space bar allows you to change from walking to riding your bike. The joystick controls your character while the fire button shoots your weapon.

Unreleased 8-bit ports
Virgin announced and advertised the release of the game also for the ZX Spectrum and Amstrad CPC, but both versions were never released.

At least the Spectrum version existed in a playable version, as the magazine Computer and Video Games reviewed this version in their issue #111 (February 1991). It was rated 54/100.

Alternate Titles
"Judge Dredd: I am the Law" -- Tag-lined title 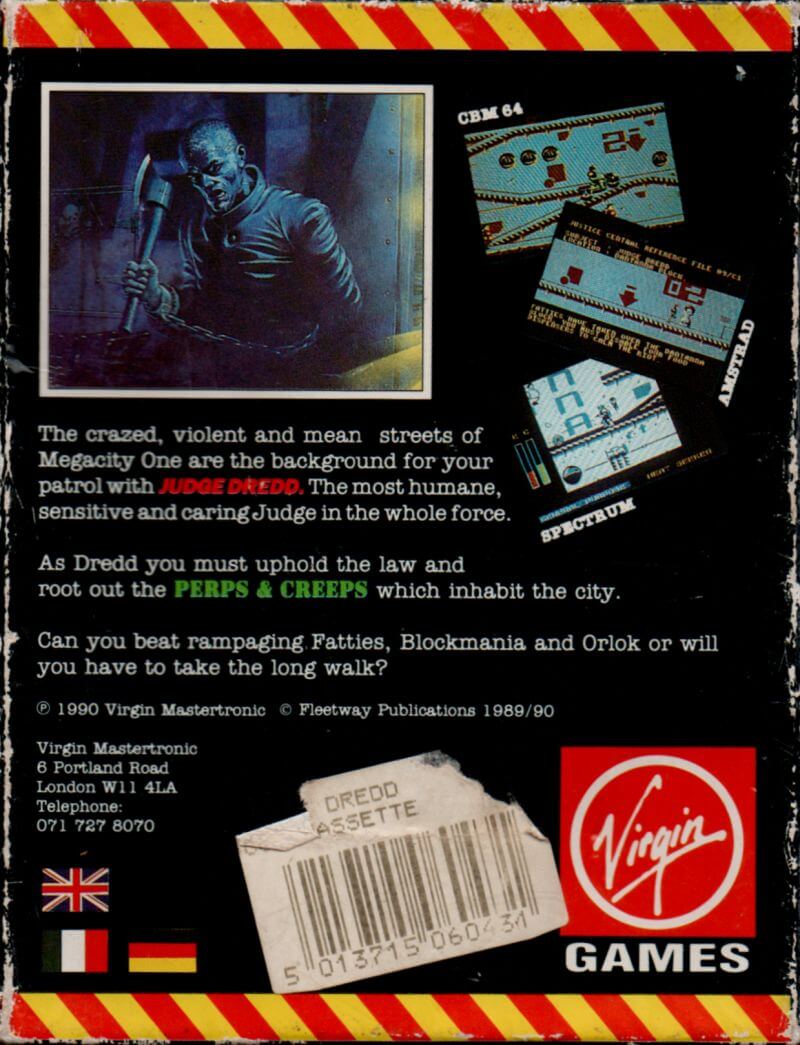 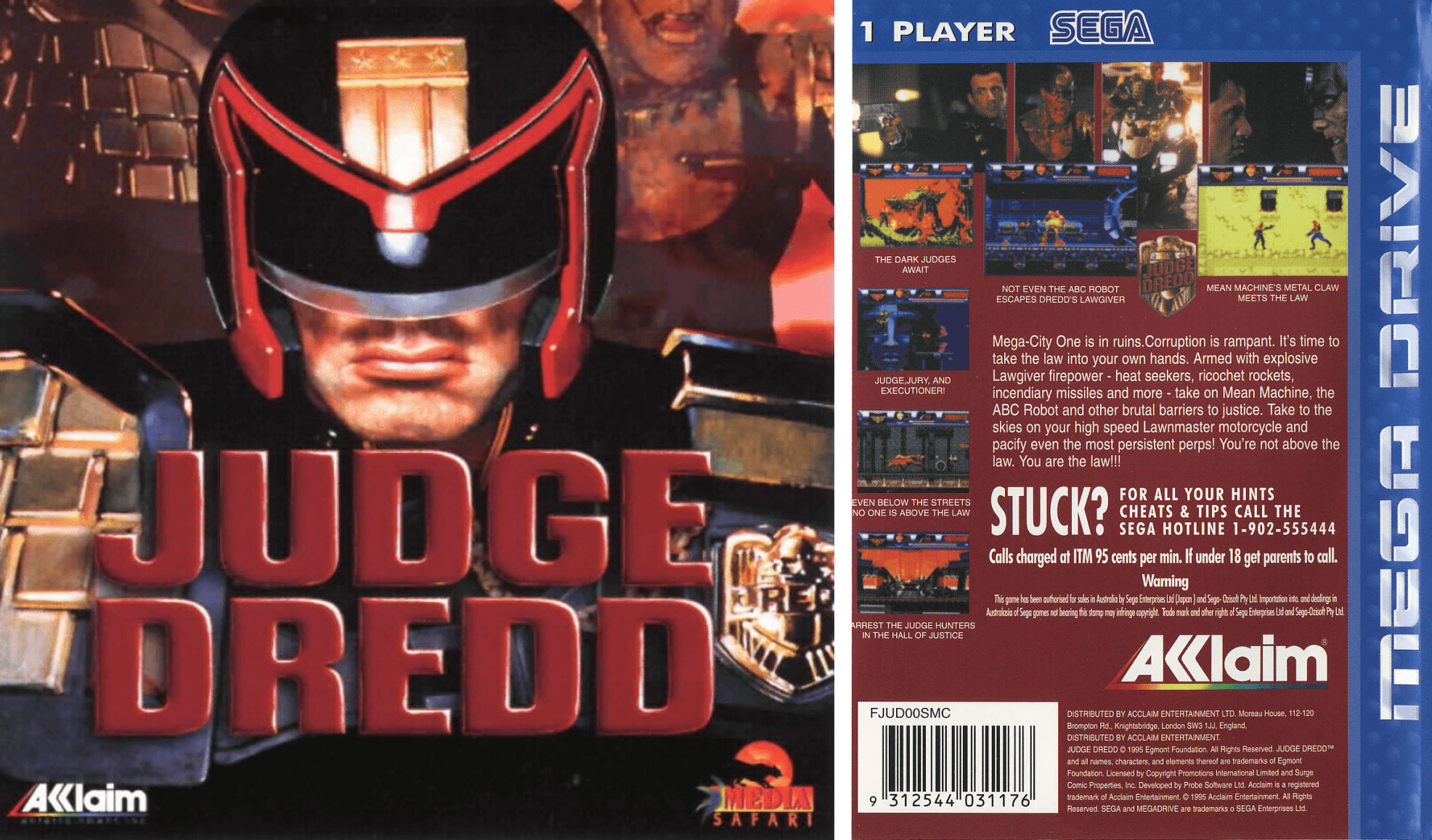 Description
Judge Dredd is a platform action game based on the British comic book character of the same name and the 1995 movie that tarnished that name. The game was a multi system release so it fits the standard console jump/shoot/duck formula although it does add some unique twists such as wounding enemies so that they surrender and can be arrested.

The initial levels follow the plot of the movie with futuristic lawman Judge Dredd framed and sent to the Aspen penal colony from which he must escape and prove his innocence. Following the fight at the top of the Statue of Liberty that ended the film, the game continues on with levels and characters inspired by the comic book culminating with a battle against the Dark Judges on Deadworld.

The game is loosely based on the 1995 film Judge Dredd, which was a spin off from the Judge Dredd strip from 2000AD.

Development
For seven of the game's 12 levels, the backgrounds were created by digitizing sets from the movie; the remaining five levels use backgrounds based on the comic book.

A conversion of the game was in development for the Atari Jaguar CD after Atari Corporation and Acclaim announced their partnership in March 1995 that included plans to release three titles for the system, but Judge Dredd was later licensed to Atari Corp.

Months after the announcement of the partnership and was planned for a Q4 1995 release, but the port went unreleased for unknown reasons.

One of the "chasers" in the 1995 Judge Dredd: The Movie trading card series was a nine card set of "Acclaim Judge Dredd Video Game Playing Tips". These cards featured screen shots from the game on the front and related strategies on the back. For example: Alternate Titles "Judge Dredd 95" -- Steam title "ジャッジ・ドレッド" -- Japanese spelling