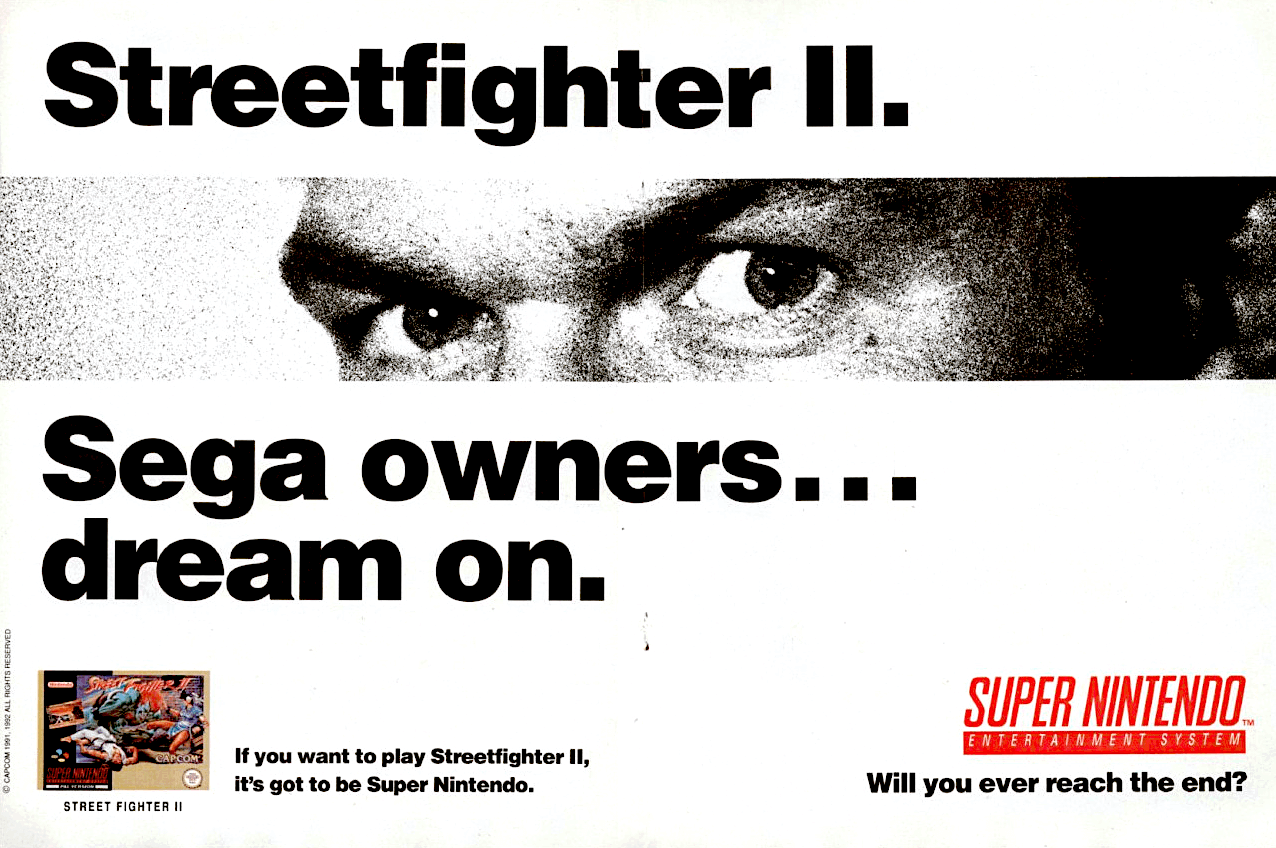 Street Fighter II is a competitive fighting game developed by Capcom and released for arcades in 1991. The sequel to the 1987 game Street Fighter, it adds multiple playable characters, each with their own fighting style, and features such as command-based special moves, a six-button configuration, and a combo system. It was the fourteenth Capcom game to use the CP System arcade system board.

In 1992, Street Fighter II was ported to the Super Nintendo Entertainment System, for which it became a longstanding system-seller; its success led to a series of updated versions. By 1994, Street Fighter II had been played by at least 25 million people in the United States, at home and in arcades. The console ports sold over fourteen million copies worldwide, including 6.3 million copies on the SNES, making it Capcom's bestselling game for the next two decades and their bestselling game on a single platform.

Development
Although the original Street Fighter had not been very popular, Capcom began to make fighting games a priority after Final Fight was commercially successful in the United States. Yoshiki Okamoto recounted, "The basic idea at Capcom was to revive Street Fighter, a good game concept, to make it a better-playing arcade game." About 35 to 40 people worked on Street Fighter II, with Noritaka Funamizu as a producer, and Akira Nishitani and Akira Yasuda in charge of the game and character design, respectively. Funamizu notes that the developers did not particularly prioritize Street Fighter II's balance; he primarily ascribes the game's success to its appealing animation patterns. The quality of animation benefited from the developers' use of the CPS-1 hardware, the advantages of which included the ability for different characters to occupy different amounts of memory; for example, Ryu could take up 8Mbit and Zangief 12Mbit. The game's development took two years.

The game's combo system came about by accident:

The vast majority of the in-game music was composed by Yoko Shimomura. This was ultimately the only game in the series on which Shimomura worked, as she subsequently left the company for Square two years later. Isao Abe, a Capcom newcomer, handled a few additional tracks ("Versus Screen", "Sagat's Theme", and "Here Comes A New Challenger") for this game and subsequently became the main composer on the remaining Street Fighter II games. The sound programming and sound effects were overseen by Yoshihiro Sakaguchi, who had been the composer on the original Street Fighter. 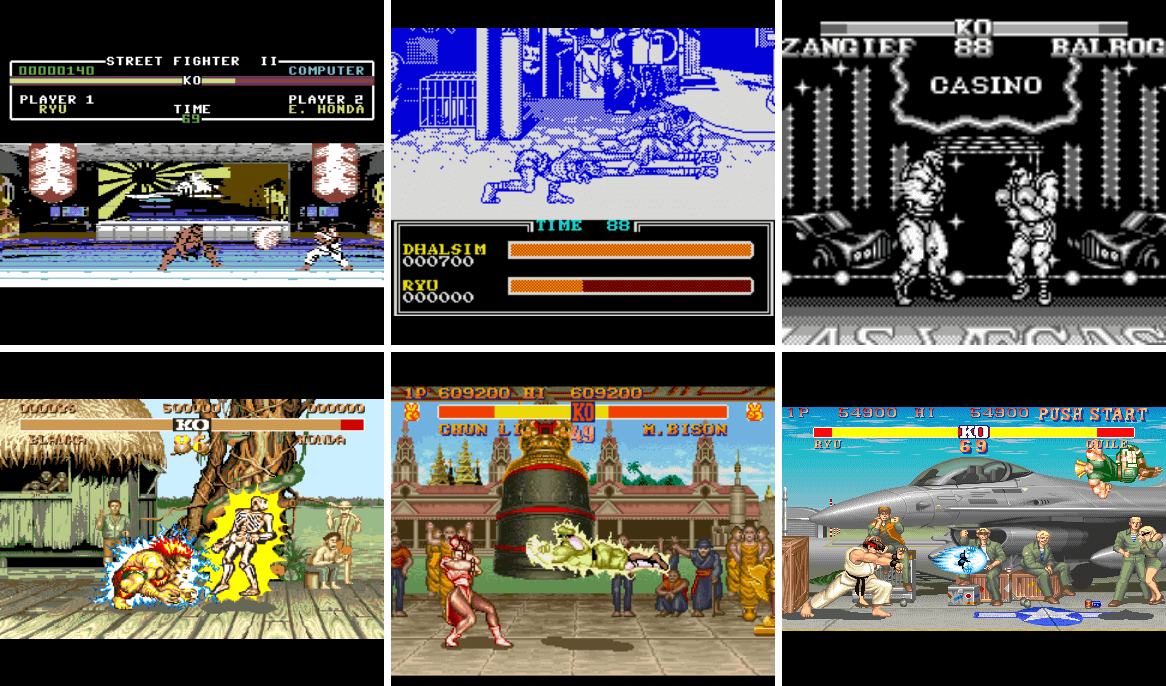 Super NES
Street Fighter II was released for the Super Famicom on June 10, 1992 in Japan, which was followed by a North American release for the SNES in August of the same year and a European release in December. It was the first game released on a 16-Megabit cartridge for the SNES. Many aspects from the arcade versions were either changed or simplified in order to fit into the smaller memory capacity. This version also featured a secret code which would allow both players to control the same character in a match, which was not possible in the original arcade version. The second player uses the same alternate color palette introduced in Street Fighter II: Champion Edition. The four Grand Masters are still non-playable, but they use their Champion Edition color palette if the code is entered.

Other changes are as follows:

Home computers
U.S. Gold released versions of Street Fighter II for various home computer platforms in Europe, namely the Amiga, Atari ST, Commodore 64, PC (DOS), and ZX Spectrum. These versions of the game were all developed by Creative Materials, except for the ZX Spectrum version which was developed by Tiertex Design Studios. These versions were not released in any other region, except for the PC version, which also saw a release in North America (where it was published by Hi-Tech Expressions).[15] These versions suffered from numerous inaccuracies, such as missing graphical assets and music tracks, miscolored palettes, and lack of six-button controls (due to these platforms having only one or two-button joysticks as standard at the time). As a result, these versions are filled with unusual peculiarities such as Ryu and Ken's Hadouken (Fireball) sprite being a recolored Yoga Fire and the title theme being used as background music for matches, while move properties are completely different. In the DOS version, in particular, Dhalsim ends up being the strongest fighter in the game due to his basic attacks having high priority over other characters. The DOS version also saw a bootleg version and was actually considered by many, while mediocre, to be still quite superior to the official DOS version. Despite being officially advertised by US Gold along with the C64 and ZX Spectrum conversions and anticipated on magazines, the Amstrad CPC development by Creative Materials was scrapped and the port finally never surfaced.

C64 version
One interesting quirk about the Commodore 64 version of the game is that the special moves printed in the manual for each character were just plain wrong.

Game Boy
The Game Boy version of Street Fighter II was released on August 11, 1995 in Japan, and in September 1995 internationally. It is missing three of the original characters (Dhalsim, E. Honda, and Vega), although the remaining nine are playable. The graphics, character portraits, and stages are based on Super Street Fighter II, although some moves (such as Blanka's Amazon River Run) from Super Street Fighter II′ Turbo are included as well. Since the Game Boy only features two buttons, the strength of a player's punches and kicks are determined by how long the player holds either button (an input method similar to the one used in Fighting Street, the TurboGrafx CD version of the original Street Fighter). Same character matches are allowed, but because of the game's lack of color, distinguishing between two characters is not possible even on a Super Game Boy.

The game also retains character endings for all 9 playable characters. This is only available by completing the Normal mode or Survival mode on level 4 or level 5 difficulty. Completing the Survival mode on level 5 also unlocks a brief video of the sprites and animations of all of the available characters. The Game Boy version remains the only version of Street Fighter 2 that is not a direct port but specifically made for a handheld system.

Additionally, the Game Boy version is notable for not being re-released in any compilation collections posthumously.

Ryu and Ken
Something few people (at least nowadays) realize about Street Fighter II is why on the original release Ryu and Ken where carbon copies of each other. Sure, the tradition of having two very similar main antagonistic characters is present on pretty much all 1-on-1 fighting games since it works as a standard dramatic component, but the reason for said tradition's creation on SF2 was purely practical: the original arcade version of the game didn't come with different palettes, so there was no way to have two players controlling the same character without getting confused. Thus having Ryu and Ken available was the only real way in SF2 to have a fair and completely even fight. 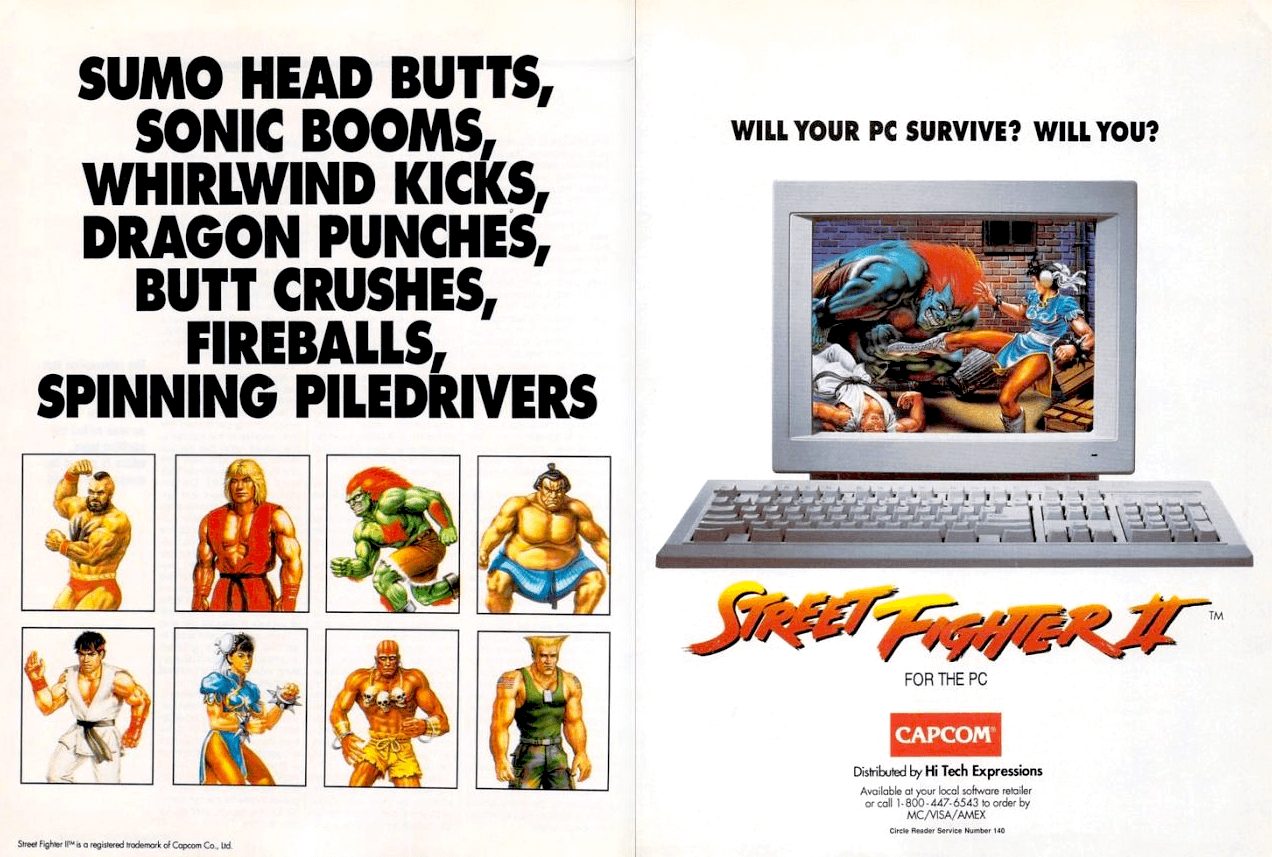 Regional differences
With the exception of Sagat, the Grand Masters have different names in the Japanese version. The African-American boxer known as Balrog in the international versions was designed as a pastiche of real-life boxer Mike Tyson and was originally named M. Bison (short for "Mike Bison"), while Vega and M. Bison were originally named Balrog and Vega, respectively. When Street Fighter II was localized for the overseas market, the names of the bosses were rotated, fearing that the boxer's similarities to Tyson could have led to a likeness infringement lawsuit.[5] This name change would be carried over to future games in the series. To avoid confusion in Tournament Play, many players refer to each character by a defining characteristic. The names are "Claw" to refer to the character from Spain, "Boxer" to refer to the African-American boxer, and "Dictator" to refer to the final boss of the game.

The characters in the Japanese version also have more than one win quote[6] and if the player loses a match against the CPU in the Japanese version, a random playing tip will be shown at the bottom of the continue screen. While the ending text for the characters was originally translated literally, a few changes were made due to creative differences from Capcom's U.S. marketing staff. For example, the name of Guile's fallen friend (who would later debut as a playable fighter in Street Fighter Alpha) was changed from Nash to Charlie, since a staff member from Capcom USA felt that Nash was not a natural sounding English name.

Sheng Long
Remember the Sheng Long controversy? Whenever Ryu won a match he would say his trademark phrase just as anyone else, but his was a little more cryptic than the others: "You must defeat Sheng Long to stand a chance" Who the hell is Sheng Long?? That was what most western SF2 players though. The answer as usual was in a botched translation effort: Sheng Long is the chinese pronunciation of Sho-Ryu, as in Sho-Ryu-Ken, aka the Dragon Punch. Ryu was saying that you had to master his technique in order to beat him, but for some odd reason that we'll never know English, Chinese and Japanese got all mixed up in some poor translator's head and the "Sheng Long" was phonetically transcribed as it was, and coupled with Ryu's cryptic message gave the impression that he was talking about some hidden character.

The rumor flew around from day one (among other famous SF2 hoaxes like the one about you being able to ride Guile's Jet or beating up the bystanders in some stages), but it really spread like wildfire when as an April Fool's joke EGM published an article about how there really was a secret character named Sheng Long unlockable via ungodly gaming prowess (beating all characters in "perfect" matches). Regardless of how ridiculous the rumor was, every kid out there poured coin after coin in the SF2 machines and spent hours in front of the home versions in an effort to unlock said character.

References to the game 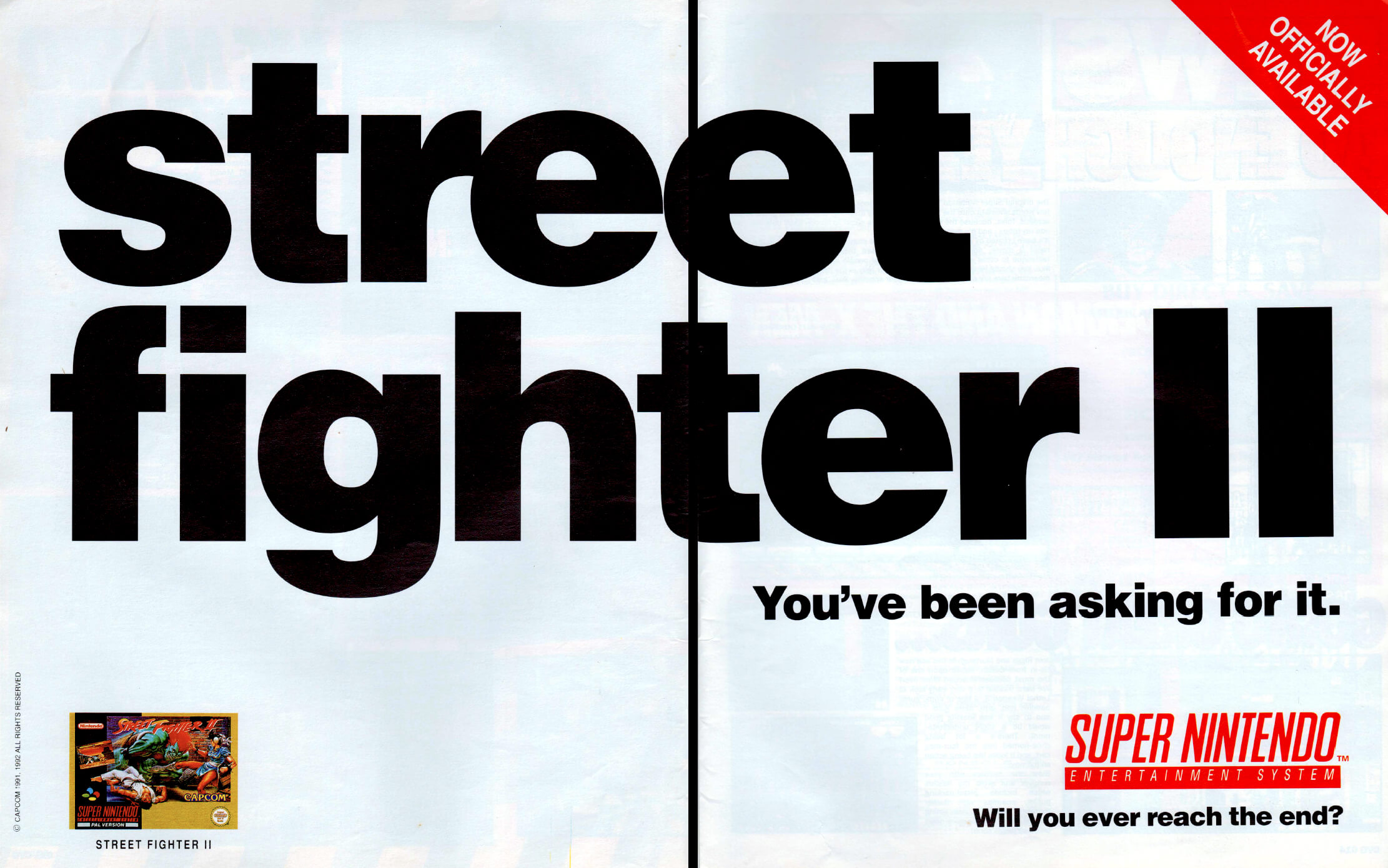 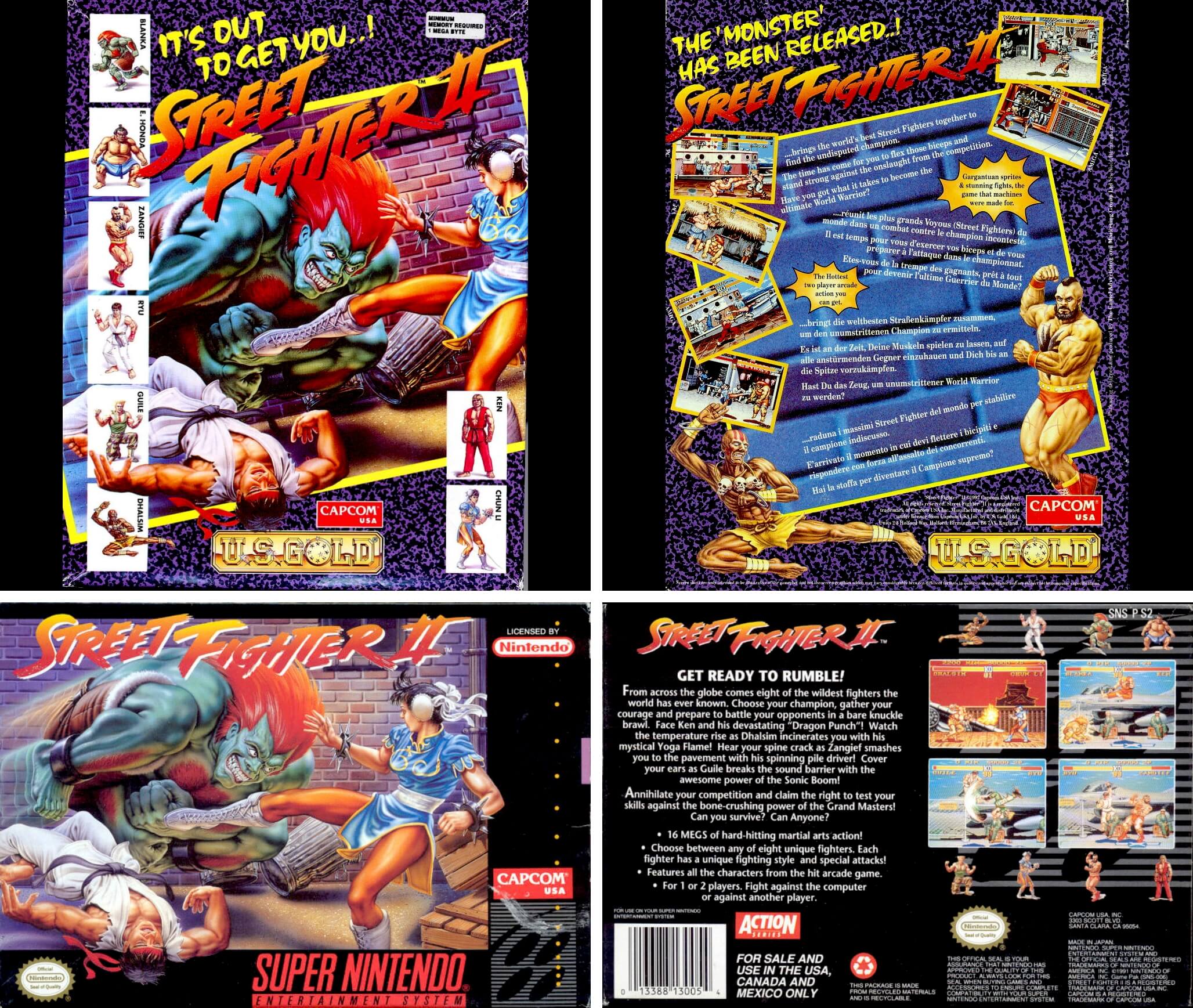