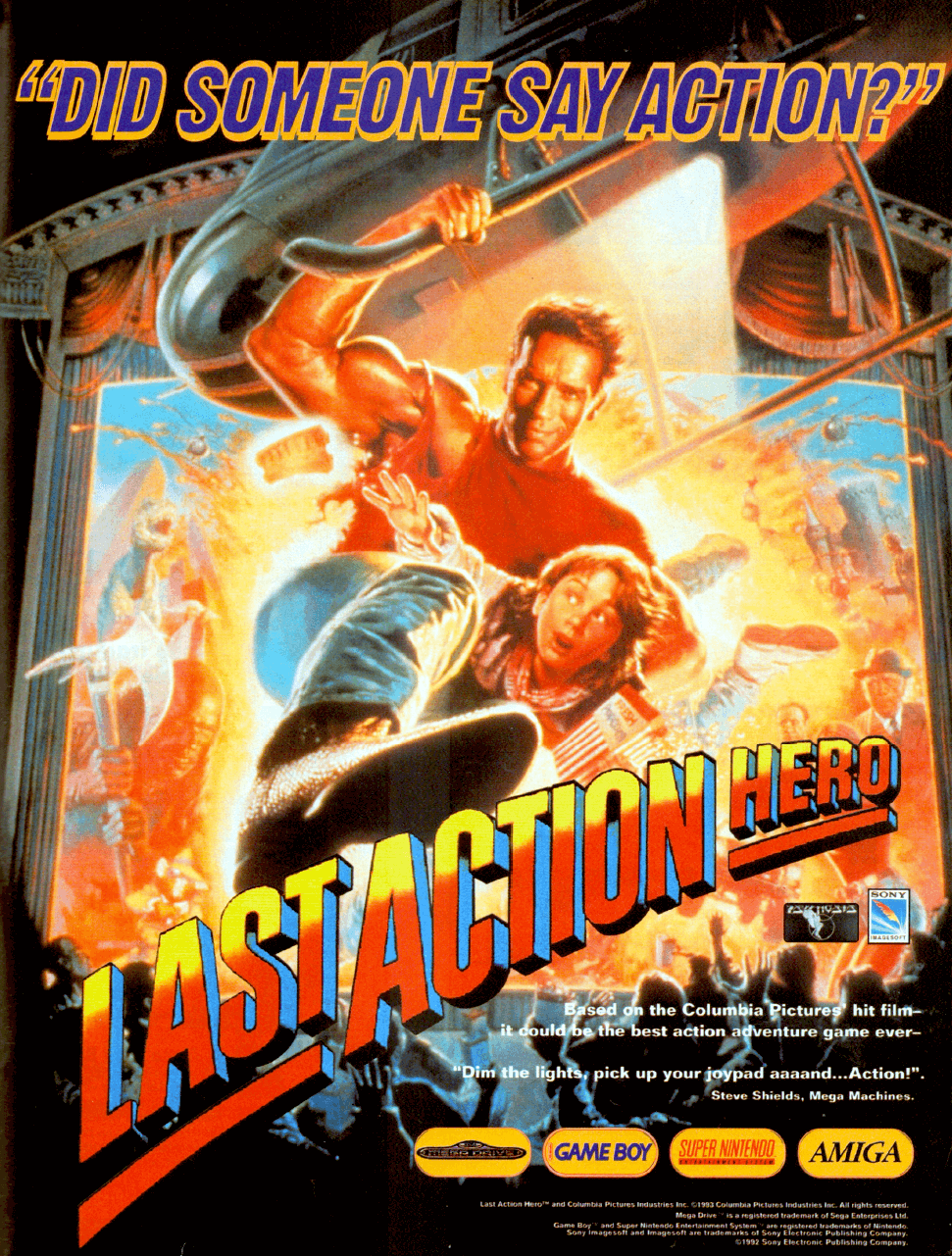 Players control action hero Jack Slater through four beat'em up levels. The first two are inspired by the beginning sequence of the movie (the finale of "Jack Slater III"), the third by the hotel funeral inside the movie world, and the last by the premiere of "Jack Slater IV" in the real world. Slater must move to the level exit before the timer or his energy runs out. Various goons stand in his way and must be defeated through kicks or punches.

There are four varieties of enemies in the game, wielding either knives, baseball bats, Molotov cocktails or guns. Spent life energy can be refilled by collecting movie tickets that sometimes fall from the sky. The Genesis version adds an additional twist in the first level: a crosshair will follow Slater around and randomly shoot bullets at him. All except the first stage end with a boss fight. Bosses include The Ripper, a helicopter and main villain Benedict.

The driving sequences are also seen from the side. Slater's car must avoid hitting cars and trucks parked on the road while trying to destroy enemy cars by jumping over a ramp and then landing on top of them.

Cutscenes tell the story of the film between levels, following the original plot only loosely.

Description
The Amiga game based on the 1993 Arnold Schwarzenegger vehicle Last Action Hero is a side-scrolling brawler in the vein of Double Dragon or Final Fight.

The player controls action hero Jack Slater through five levels, including the streets, a warehouse, Slater's home and more. He must beat up a number of thugs with a variety of punches and kicks, a somersault, or a knee to the groin, all while slowly moving to the end of the level. Up to four goons will attack at the same time. In the later levels, some are armed with guns. At the end of each level a boss fight against a more powerful villain follows. These include the main antagonists from the movie like Benedict and Slater's arch enemy the Ripper, but also some characters thought up for the game only. Most of them don't play fair and will have some regular thugs coming to their aid.

Slater starts the game with a limited number of lives, which can be increased by picking up golden movie tickets lying about in trash cans or other containers. Sound-wise the game features a sample of Arnold's famous one-liner "I'll be back" and guitar-heavy rock tracks as music. 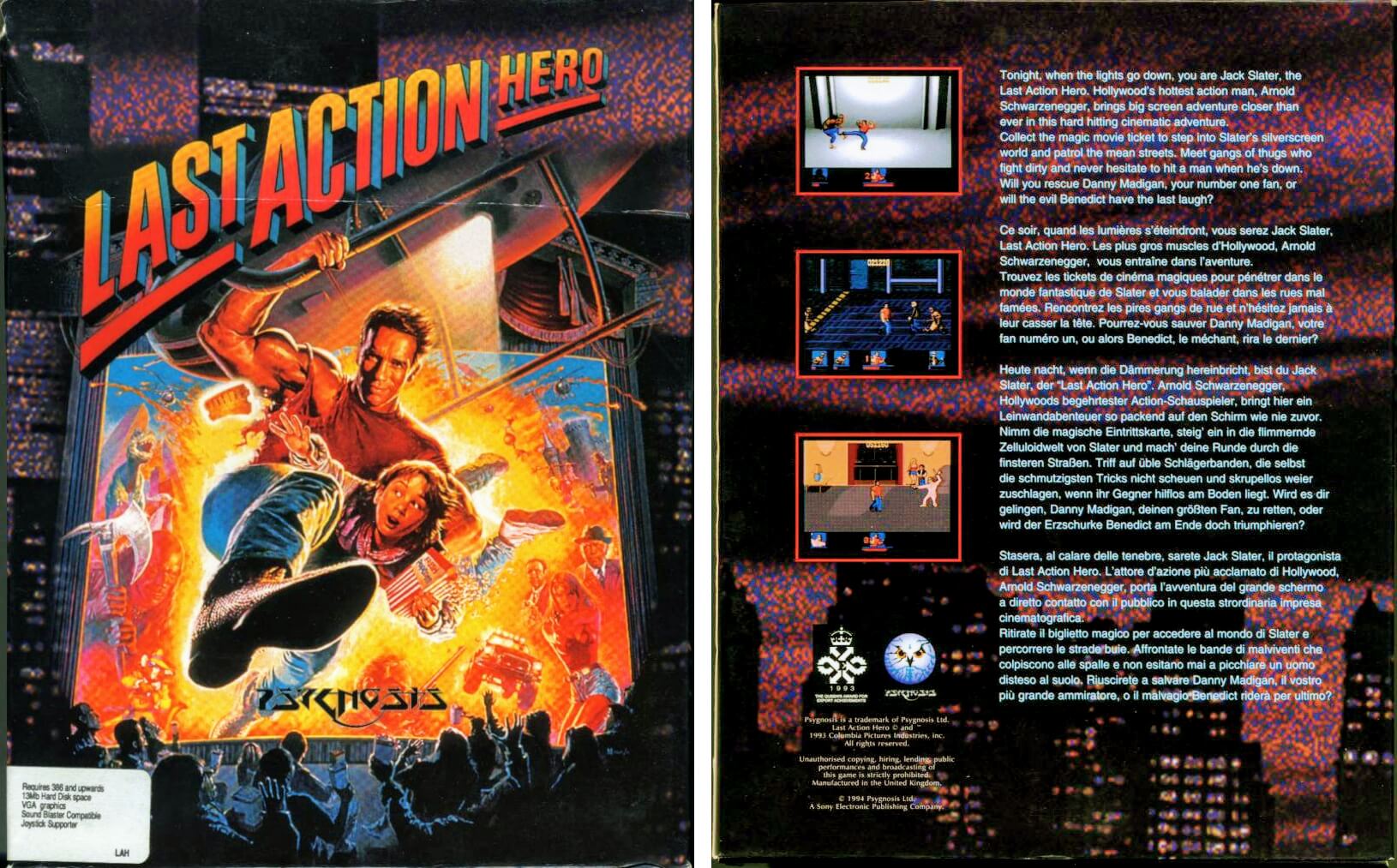 Description
Danny Madigan is watching a sneak preview of the latest film of his favourite hero, Jack Slater, when he is mysteriously catapulted inside the screen; now standing next to his favourite idol. You are Jack Slater, an action movie hero, who takes on the ax maniac “The Ripper”, who is holding a school under siege, and Benedict, a villain who wants to use Danny’s ticket to bring terror to the real world.

The game, based on the film of the same name, starring Arnold Schwarzenegger, is very different for each platform. For most of them, the gameplay can be split up into two parts: side-scrolling fighting levels and wild car chases on the streets.

Trivia
Various Development Notices Collected trivia about the development of the PC version by Ste Cork:

1) Columbia Pictures said that we weren't allowed to shoot at the bad guys or armoured truck in the game, even though Arnold does exactly that in the movie. This was a the time when he was starting to make the comedy pictures like Junior/Twins/Kindergarten Cop, and therefore we were told to turn the violence right down. We were only allowed to have the car bump into the truck over and over to damage it. I found this restriction to be annoying and stupid, and as a riposte I made the pedestrians capable of being run over by all the in-game vehicles, including the computer controlled ones, the bad guys and your own. Pedestrians even leave little blood splats when run over, and do not wait for cars before using the pedestrian crossings (which cars ignore), ensuring they get splatted regularly. Columbia never said anything and the feature remained.

2) As a further 'up yours' to Columbia I created a semi-hidden area in the middle of the map, where the player can squeeze between two bushes, drive around the back of a house that's not visible from any other part of the road, and see a swastika-shaped swimming pool, on the basis that there was a nazi war criminal living there. Unfortunately the Psygnosis producer who saw it (and thought it was hilarious) insisted the pool be changed to a simple rectangle. The hidden area is still there, but there's nothing exciting to see.

3) Every car in the city on the driving section drives correctly even when at the other end of the map, observing junctions/lane changes and other vehicles properly. I had fun writing that, even if the game was so bad.

4) At one point the game progress came to a stop, because the freelance artist (who I never met, he just sent me disks in the post) refused to send any more graphics until some unrelated payment issue with Psygnosis had been cleared up.

5) Arnold Schwarzenegger (or more likely his agent/publicist) rejected the Arnold-graphics for the beat-em-up part of the game twice as being "too muscley" - again, it was due to the actor's attempt to switch over to making comedy movies at the time

6) Every platform version of this game was different to all the others. There was no central coordination or direction, the box art for several versions (including PC) were from an early Commodore Amiga demo and thus pointless, and the project was a "short straw" - meaning no-one wanted to do it, hence why many versions don't even have authors names on them. Psygnosis even shipped the Amiga manual with the PC version, and just added a single-sheet loose insert for PC controls. No-one cared about this game, and it showed.

7) Last Action Hero was one of the only movie-license title produced by Psygnosis (along with the Bram Stoker's Dracula games from the same time period) and they only got it because Sony (who were acquiring Psygnosis at the time) owned Columbia Pictures. They didn't set a good example ;-)

Description
The 1993 action/comedy/fantasy film Last Action Hero received a unique adaptation for portable systems. Like other versions, the game combines side-scrolling action and driving, but has unique levels and game play mechanics.

The bulk of the game consists of side-scrolling platforming. The player controls action hero Jack Slater who has to find the level exit before the timer runs out. Standing in his way are the occasional bad guy, of which there are only two standard varieties: one is armed with a gun and rolling bombs, the other with a baseball bat. Slater can defeat them with punches or roundhouse kicks. Other obstacles can only be overcome by using special items, with the item available depending on the level. There are fire extinguishers, keys, bombs and upward-launching rockets. To get an item, Slater must collect a number of movie tickets flying in the air.

Two of the game's levels are driving-based. Seen from the top, the player controls Slater's car and must again reach the level end before the timer runs out. To do so, a turbo boost must be acquired (for a large jump or higher top speed), again by collecting movie tickets. Some tickets are floating above the road, others can only be acquired by ramming other cars and collecting them from the wreckage. Only the Game Gear version includes a small section recreating the "chicken" scenes from the film: Slater's and the bad guy's car are situated head-to-head and the player must mash buttons to survive the following head-on collision.

The game also includes a few boss fights against a helicopter and the movie villain The Ripper.