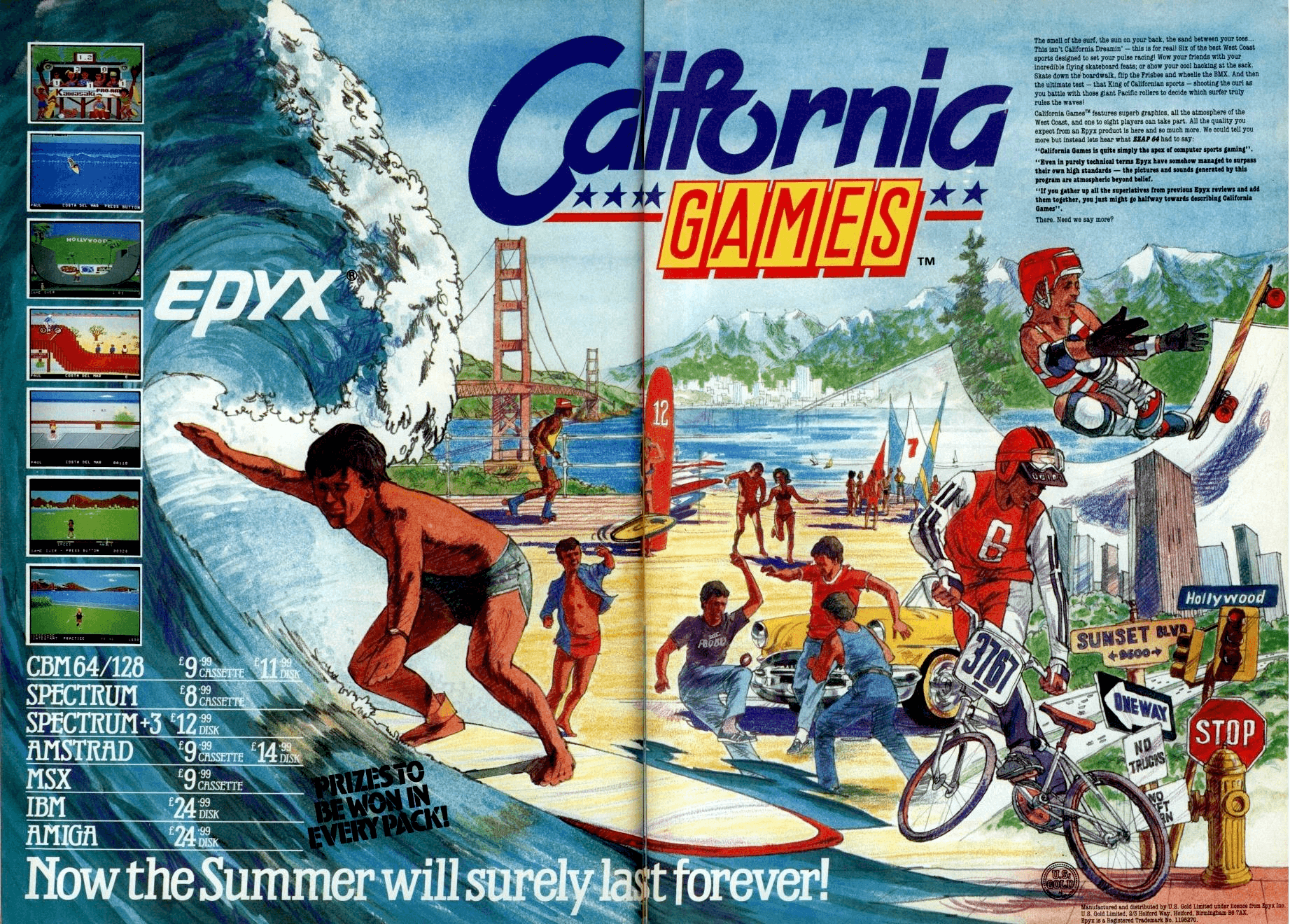 Description California Games was the original "Extreme Games" – what today's generation might call "X-Games in the sun". Players can select sponsors (absent in some versions) and compete in events such as skateboarding, footbag, surfing, roller skating, flying disc (frisbee) and BMX. The surfing event is ranked by judges, which give a score to help the players improve their routine.

The Atari 2600 version of California Games, released in the later years of Atari's dominance in the Home Video Game market, was one of a handful of games that used 16K of memory. The Atari 2600 had been designed to only run cartridges of 2K and 4K in size. Games that were written to exceed that 4K memory limitation required the "bank swapping" technique in order to access 8K, 12K, and even 16K game cartridges.

Memory was still expensive in the 1980's, yet the public wanted more and more advanced games, especially since it had been several years now since the release of the many popular 8-bit home computer systems that had been flooding the market and reducing in cost. And with the Nintendo Entertainment System having just been released, the Atari 2600 was beginning to look very dated. In order to satisfy the public’s craving for games requiring increasing amounts of memory, creating a bigger game for the Atari 2600 was the only way to do it.

In order to handle the expansiveness of their games, Epyx released all three of their Olympic-based games with multiple ROM chips equaling the necessary 16K. Using bank-swapping, the various ROM chips could be accessed and swapped as needed. And all of it was embedded within a standard-sized Atari 2600 Cartridge!

Gags During the flying disc event, if you leave the controls alone for long enough, you will see an alien abducting your partner on the radar, along the top of the screen (see screenshots).

California Games was one of the handful of games released that pushed CGA to its limits by using a timing/hardware trick to get more colors on the screen. It called this trick "MORE-color" mode (as opposed to the normal "4-color" mode), and it achieved 7 different colors on the same screen by switching from one color palette to another at a particular scanline. The switch was masked fairly well by:

While this technique has been used in other games (like Jungle Hunt), none did it so well as in California Games.

This technique will only work on 4.77MHz machines, as the timing required to change the palette is very exacting. Also, there is no way to capture, with a program, these screenshots; they had to be captured normally, then changing the used colors where the split occurred. They are identical to what's displayed on the screen, however, down to the additional color split in the names at the bottom of the title screen. )

Manual In the Lynx version's manual, it reads: "Score an extra 50 points for hitting the seagull in the beak with the foot bag (but only in this game -- be kind to the birdies in the other events)." Music The main theme song is a cover of Richard Berry's Louie Louie, later made famous by Kingsmen.

RAM When you play California Games on a PC with enough RAM, you'll get a message like this:

Development Several members of the development team moved on to other projects. Chuck Sommerville, the designer of the half-pipe game in California Games, later developed the game Chip's Challenge, while Ken Nicholson the designer of the footbag game, was the inventor of the technology used in Microsoft's DirectX. Kevin Norman, the designer of the BMX game, went on to found the educational science software company Norman & Globus, makers of the ElectroWiz series of products.

The sound design for the original version of California Games was done by Chris Grigg, member of the band Negativland.

Legacy The game was followed in 1990 by California Games II, but the sequel failed to match the original's success.

More recently the game was released for mobile phones in the Java format, and current rights holders System 3 CEO Mark Cale has stated that the game will be available in future as both a retail product and an on-line product for the Sony PlayStation 3 and Nintendo Wii and Nintendo DS. The Commodore 64 version was released for the Wii's Virtual Console service in Europe on April 11, 2008 and in North America on July 6, 2009.[19]