The Goonies - Video Game From The Mid 80's 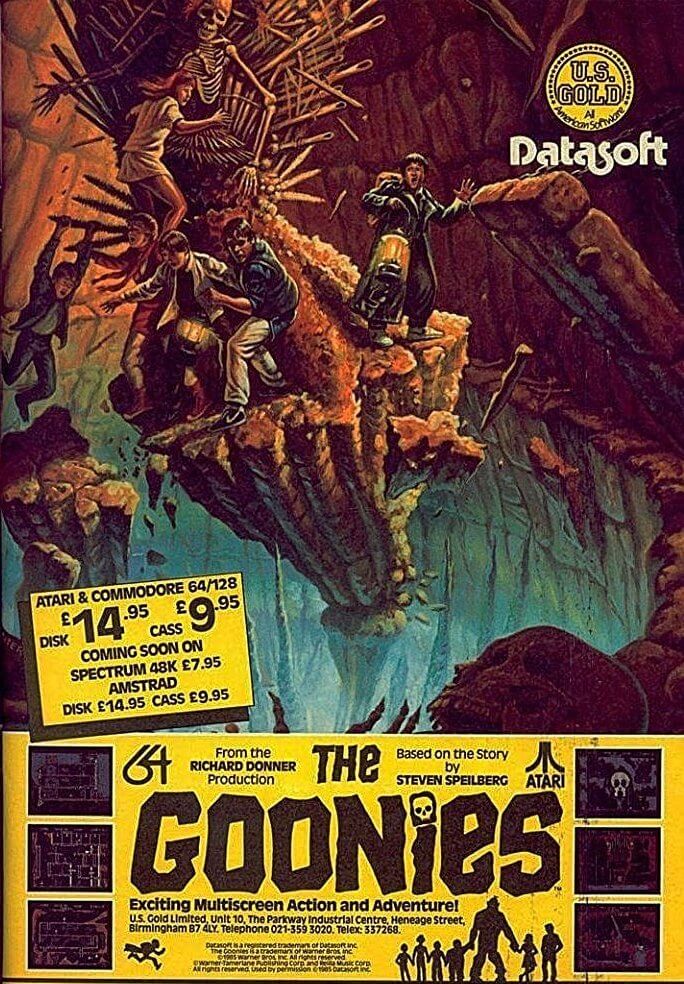 Description
The Goonies is based on the Steven Spielberg film of the same name, in which a motley crew of suburban kids in Astoria, Oregon, must save their homes from being foreclosed upon and find their salvation in a treasure map leading to an old pirate ship in a cavern. However, they must maneuver around an eccentric family of Italian criminals -- the Fratellis -- on the lam, who are also on the trail of the treasure.

The game is divided into a series of eight screens based on scenes from the film, each of which contains puzzles that must be solved by coordinating the activities of two of the kids from the Goonies (and in the last screen, the elephant-man-like Sloth) without getting killed by deadly bats, homicidal Fratellis, flying demon-skull thingies, or other environmental hazards. For example, in one screen one player must wind up and hold a winch that lifts a large stone so that the other player can pass it, run backward on a ball floating in deadly water, bypass a series of three water buckets going up and down that kill you if you do not time your passage underneath correctly, jump to the top of a rail, and slide across to grab the key to the door below -- and all this without getting hit by a wandering bat.

The game keeps a score and a high score, and you have a certain number of lives, which would be replenished at certain points or at certain score totals, and there is no save feature. In other words, the game had to be played all in one sitting, near-perfectly, to see the ending. The Goonies can be played single-player, with the joystick button used to switch between the two characters on-screen, or cooperatively, with each player controlling one of the characters.

Version differences
The Atari 8-bit version was released on both 5 . 25" diskette and cassette tape. The tape release has different music on the title screen and no demo mode.

The Goonies II was released in North America, Europe and Australia, although the original was one of the NES games released as part of the Nintendo VS. System arcade machine in the 1980s. The Goonies II has little to do with the film. In it, the Fratellis have kidnapped all the Goonies (except Mikey, whom the player guides) and have hidden them in cages across a terrain of caverns, mazes and abandoned buildings. As Mikey, the player must rescue them all and ultimately free a mermaid named Annie. Mikey was also a playable character in Konami's 1988 Famicom title Wai Wai World, which included a Goonies-themed level.

In February 2007, Chrysler's Jeep division sponsored The Goonies: Return to Astoria, a Flash-based game, developed by Fuel Industries. The player's goal is to collect map pieces and doubloons, and then race the Fratellis to One-Eyed Willy's treasure.[27][28]

A Goonies level pack for Lego Dimensions was released on May 9, 2017. The pack includes a Sloth minifigure and constructable Pirate Ship and Skeleton Organ, and unlocks a bonus level that adapts the plot of the film. 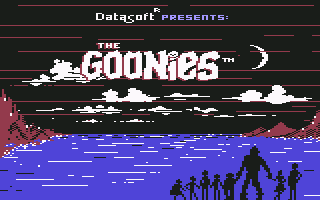 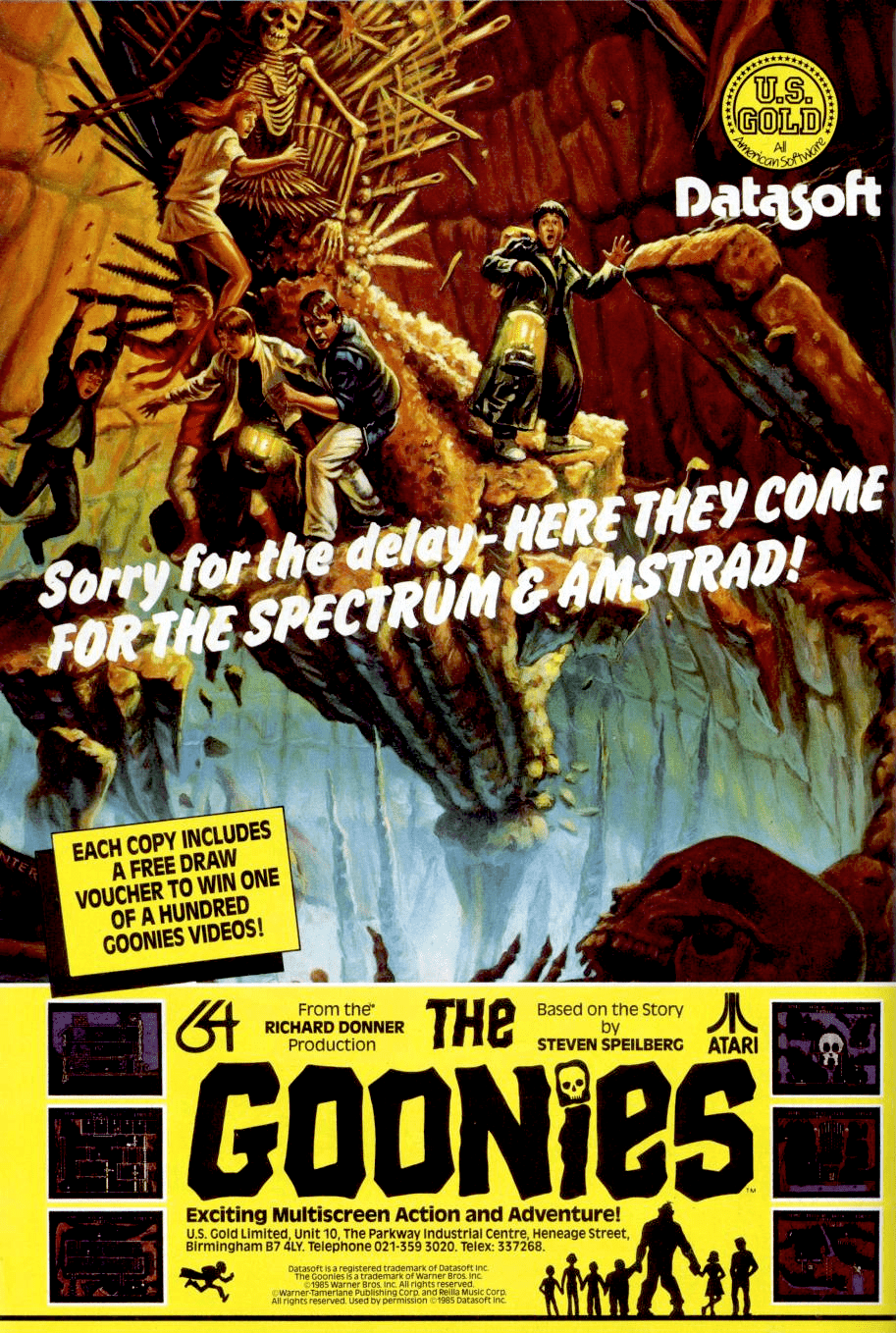 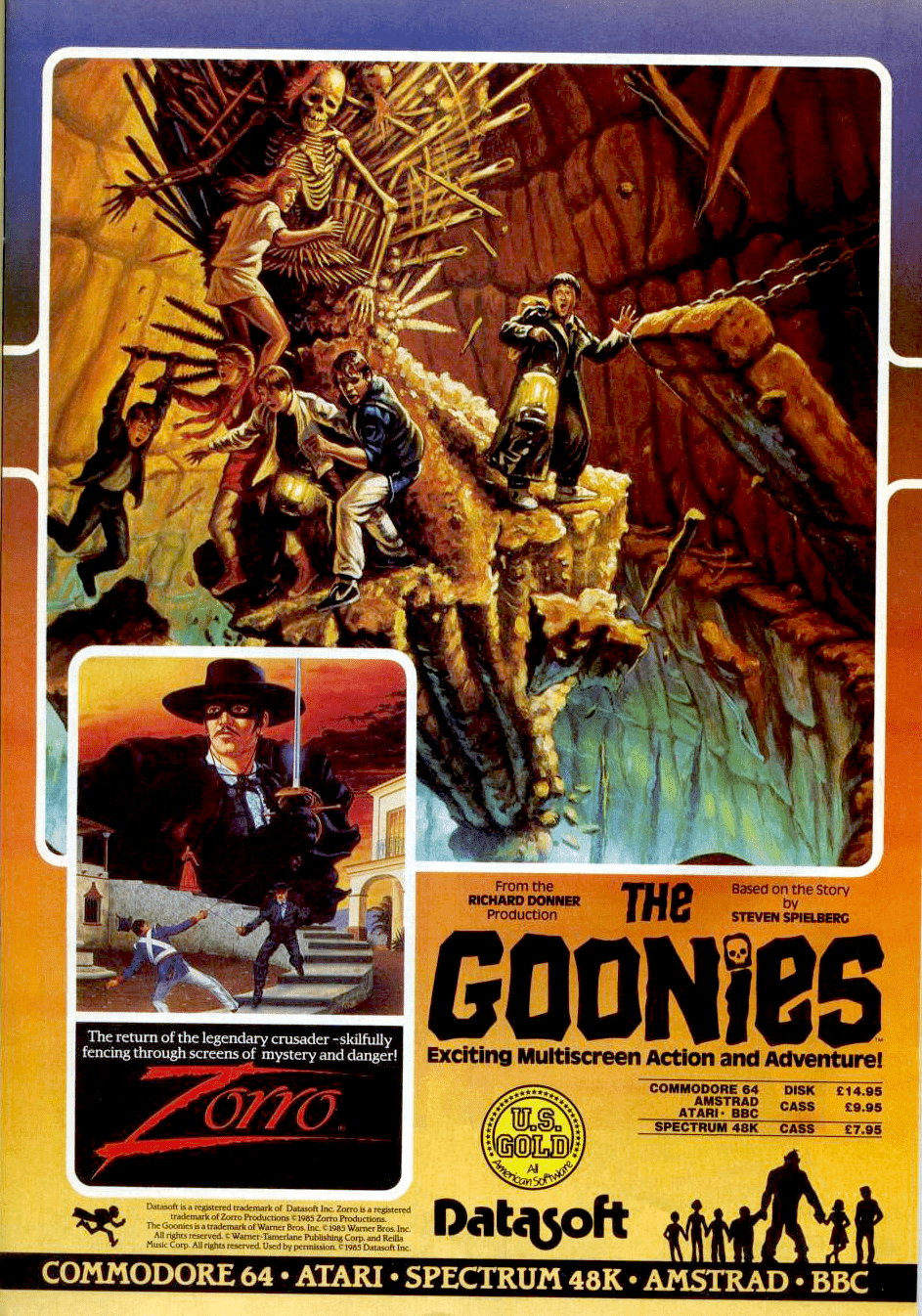 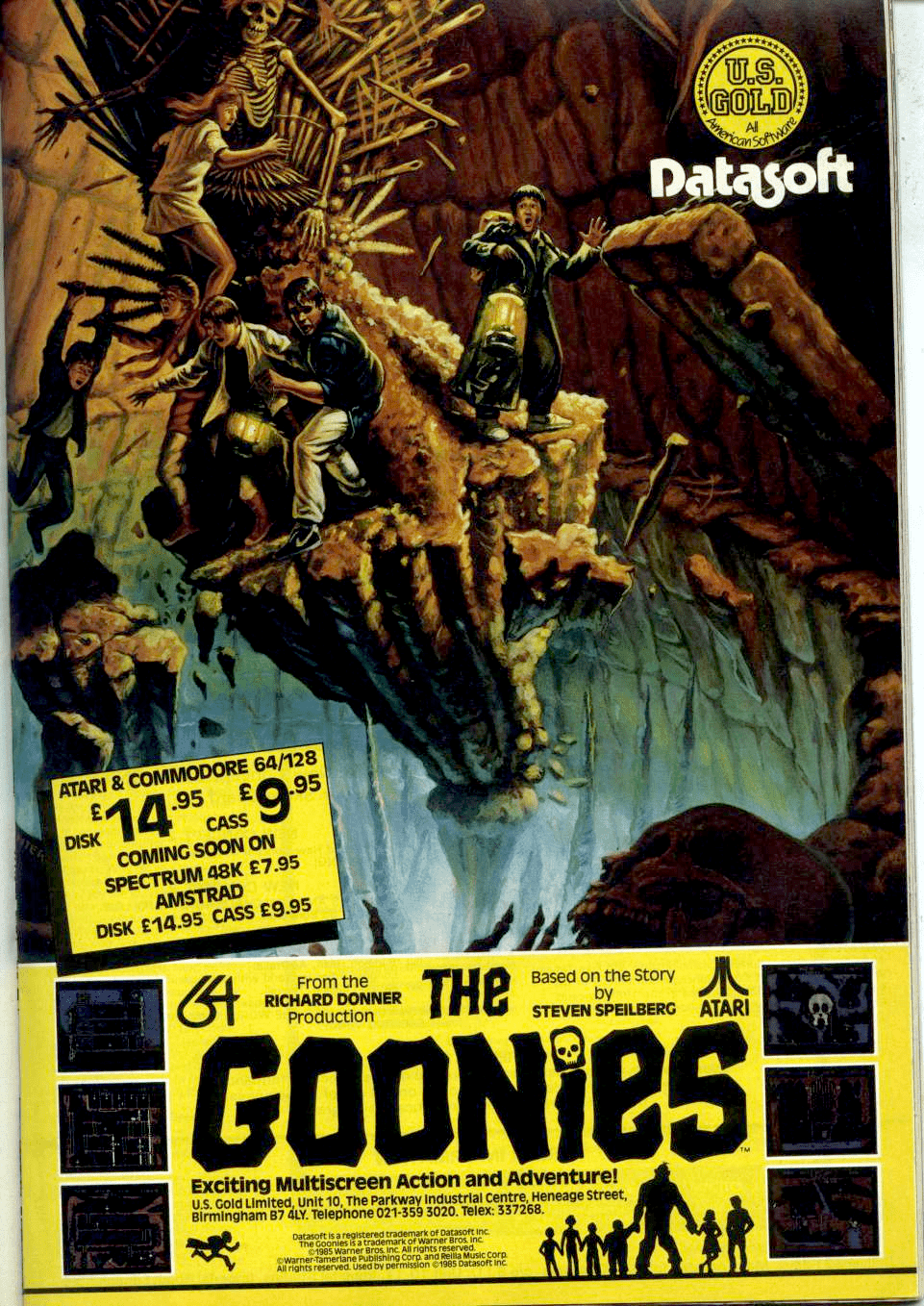 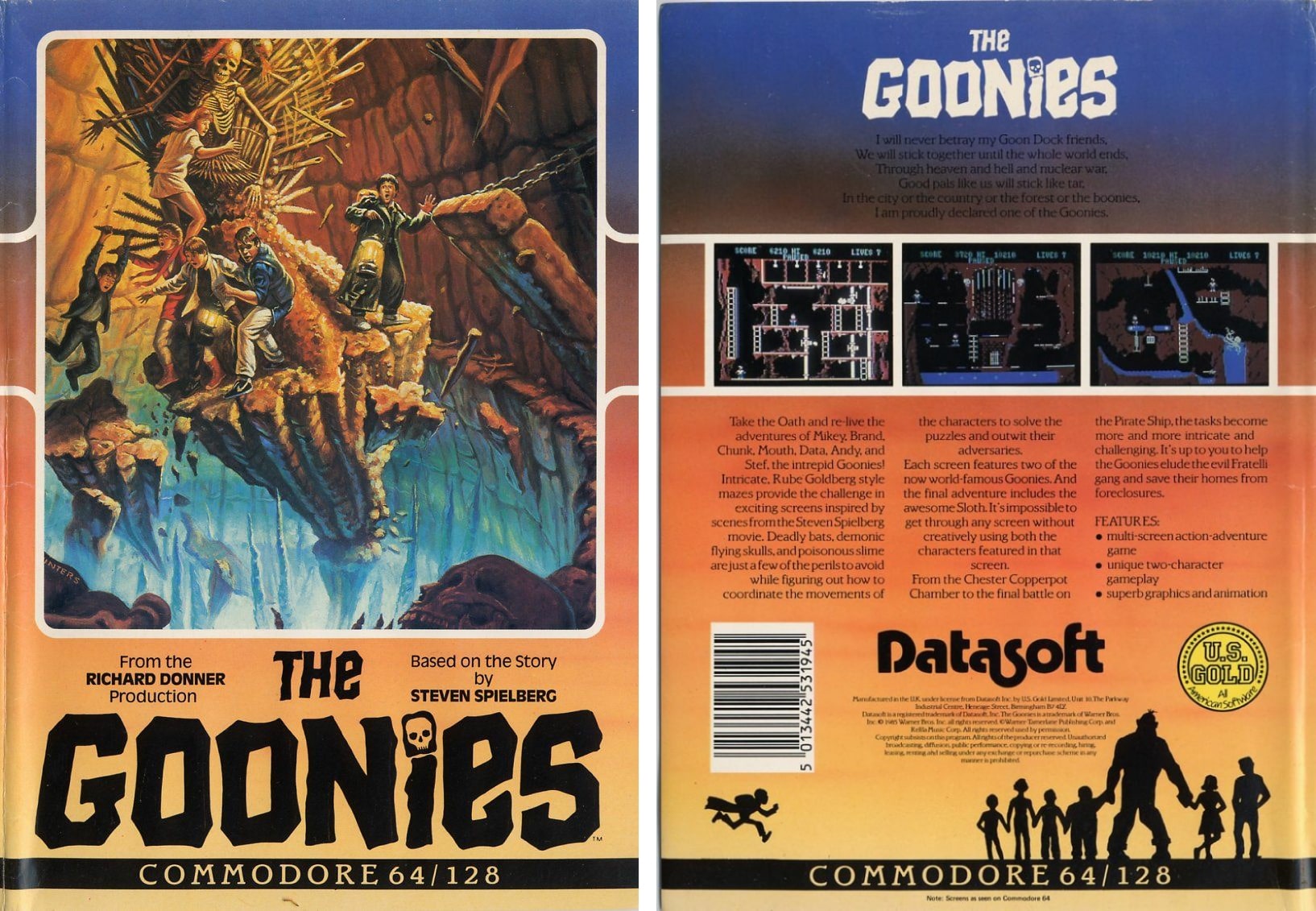