Attack Of The Mutant Camels - Video Game From The Early 80's 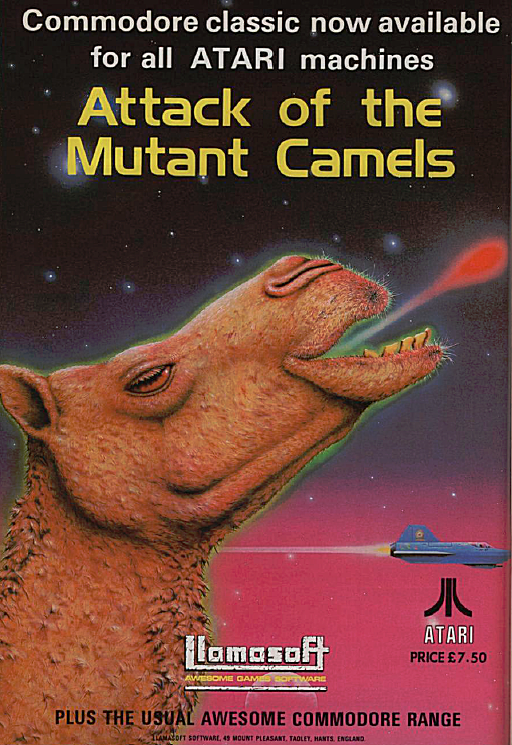 Attack of the Mutant Camels [aka Advance of the Megacamels] is a surrealist computer game written by Jeff Minter and released for the Commodore 64 and Atari 8-bit family in 1983 by Minter's Llamasoft. The horizontally scrolling shooter is similar to the Atari 2600 game The Empire Strikes Back (1982), with AT-AT walkers replaced by giant camels.[1] Confusingly, a very different game from Jeff Minter's Gridrunner series was also released in the US under the name Attack of the Mutant Camels.

Gameplay
The player controls a small jet plane and has the task of killing giant yellow camels before they reach the home base. Doing so requires several dozens of shots. The camels retaliate by shooting fireballs from their mouth. Each camel required several shots to destroy; if a camel reached the base, the game was over. Once all camels on a level had been killed, the player had to survive a "hyperspace" sequence which required avoiding high-speed missiles. Upon successful completion, the next level presented a new wave of camels, with slightly harder gameplay.

Sequel
Llamasoft released a sequel, Revenge of the Mutant Camels, in 1984.

Legacy
In 2011, Attack of the Mutant Camels was chosen to be featured in the Smithsonian Institution's "The Art of Video Games" exhibit.

In 2012 the assembly language source code of the Konix version of the game was released on GitHub.