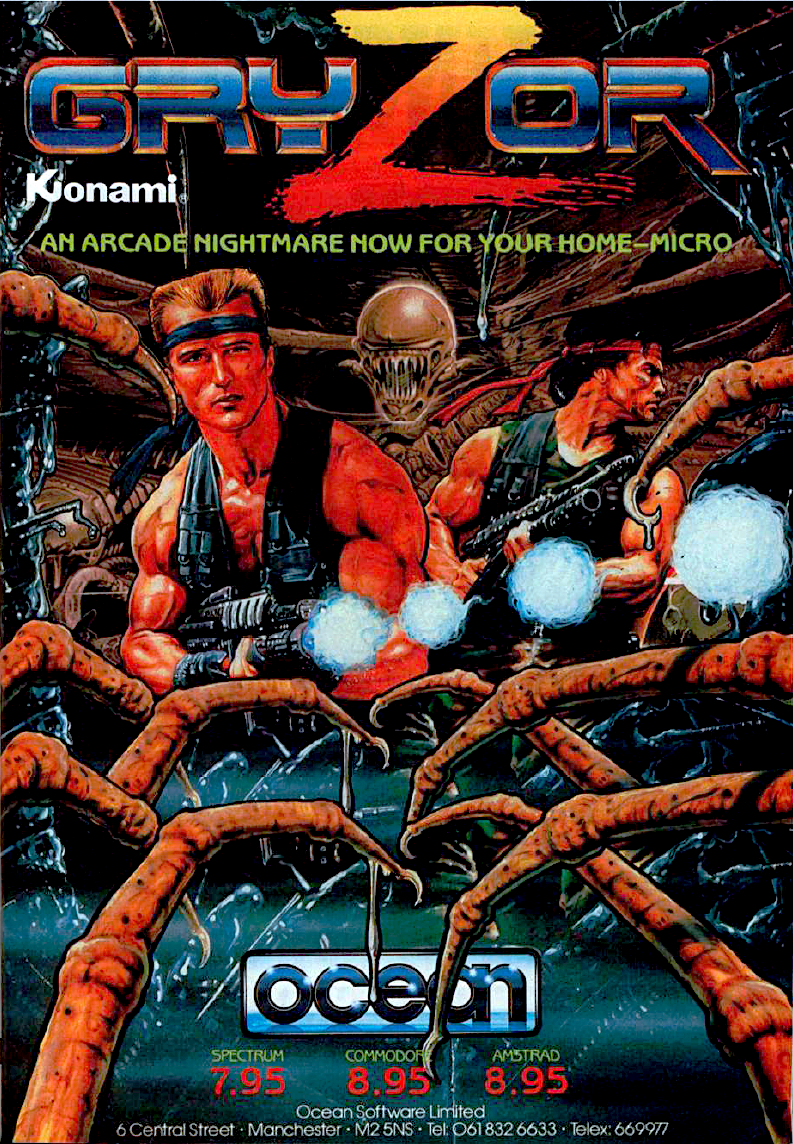 Cheat code Contra's infamous code for 30 lives [up, up, down, down, left, right, left, right, B, A, Start] has become a minor part of video game geek culture, appearing on T-shirts and referred to in movies and television shows, and being mentioned as one of the greatest gaming moments of all time by the magazine Game Informer.

Cover Art The protagonists illustrated on the front cover (Bill and Lance) were both borrowed heavily from two different Arnold Schwarzenegger (Predator - directed by John McTiernan, 1987) poses. European version The game's European NES release was censored, changing the main character and other human-looking enemies to robots. Characters remained human in other European releases.

Removed content There are a large amount of content that was cut between the original Japanese Famicom release and subsequent international NES releases. There is an opening sequence that explains the story, as well as a map screen between stages much like in Ghosts 'N Goblins. These sequences were both cut, along with the music that plays during them. Many stages featured additional visual effects, such as blowing trees on the first stage, falling snow on the fifth stage, and literally the entire level pulsating on the eighth stage. The original version also features a slightly longer ending sequence with an added scene. There is also even a hidden stage select menu.

Despite this, the game itself plays identically, as no changes were made that affect gameplay. The large amount of content removed reduced the game's data from 2 megabits to 1, suggesting this was done to save on manufacturing costs due to using a smaller ROM size.

References The ending environment is very similar to the movie Aliens. Also, the cover of the American release features two soldiers who are slightly modified and repainted images from the movie Predator.

The original Contra and its sequel, Super Contra, were set in the distant future, during the 27th century (in 2633 and 2634 respectively). The Famicom (Japanese NES) port even had an introduction sequence detailing the plot. However, when the NES version was localized, the cut-scenes were removed due to the fact that Konami was forced use a standard Nintendo-made mapper instead of the proprietary VRC4 mapper they used for the Japanese version (Nintendo had made no such restriction in Japan regarding the use of custom chips and cartridges, thus third-party companies were allowed to take such liberties if they wanted).

Since the US NES version had no in-game storyline, the author of the US manual took the liberty of placing the game's plot in the present. Moreover, the setting was changed from the fictional Galuga archipelago to the Amazons and the nicknames "Mad Dog" and "Scorpian" were given to the main characters, Bill and Lance (who also lost their surnames in the process).

When the series made it's appearance on the SNES in the form of Contra III: The Alien Wars, the intro made it clear that the game was set in the future (2636). Since there was no way cover their previous mistakes, the author of the manual this time declared that the main characters in Contra III were not Bill and Lance, but their apparent descendants, Jimbo and Sully.

Ironically enough, the censored Probotector games released for the European NES had manuals that were more faithful to their Japanese counterparts than the American versions.

The English title of Contra comes from the way the title is phonetically displayed in Japanese, using the characters "Kon To Ra". The literal meaning behind these characters seems unimportant: "kon" means "spirit", "to" means "battle" and "ra", means some sort of cloth. Literally this would translate to something similar to "Battle Spirit Cloth". An alternate source of translation claims that the title translated is "Soul Big Dipper Gauze".

Regardless of the literal meaning, the title seems to have been written as a "gikun". What that means is that the phonetics of the title are more important than the actual meaning itself.

It has been suggested by some that the intent behind the name is even more complicated than that. "Kon To Ra" purposely chosen to sound like "Contra", a term popularly used to describe armed guerrilla forces in Central America during the 1980s.