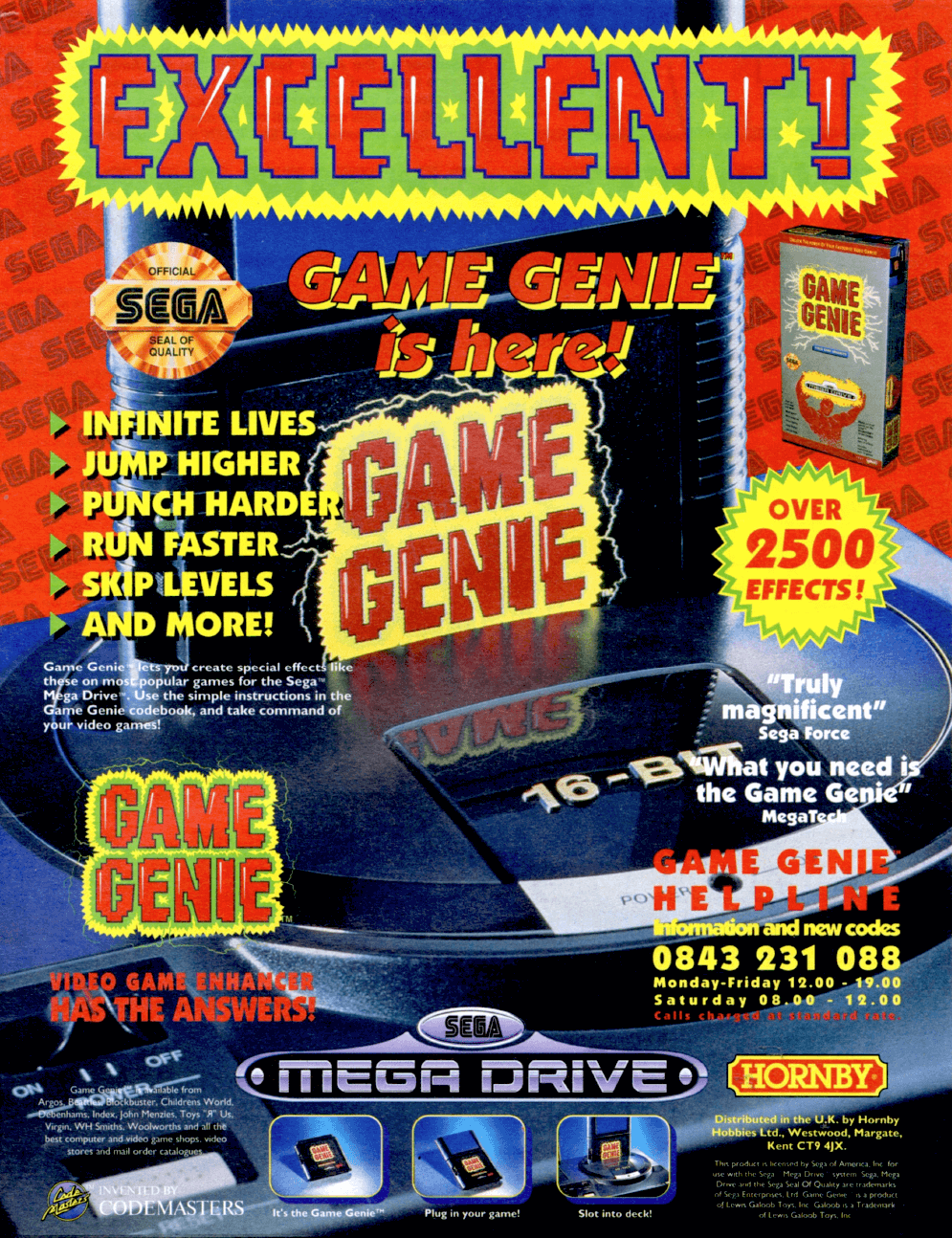 Game Genie is the name of a line of video game cheat cartridges originally designed by Codemasters and sold by Camerica and Galoob. The first device in the series was released in 1990 for the Nintendo Entertainment System, with subsequent devices released for the Super NES, Game Boy, Genesis[/Mega Drive], and Game Gear. All the devices temporarily modify game data, allowing the player to cheat, manipulate various aspects of games, and sometimes access unused assets and functions. Five million units of the original Game Genie products were sold worldwide, and most video game console emulators feature Game Genie code support. Emulators that have Game Genie support also allow a near-unlimited number of codes to be entered whereas the actual products have a much smaller limit, between three and six codes.

In mid-1993 Codemasters began development on a "Game Genie 2", with Galoob again due to market and distribute the device in North America, but ultimately no Game Genie devices were released by Codemasters for the fifth generation of consoles. However, other companies have produced similar hacking devices such as the Code Breaker and GameShark. The Game Genie brand was later revived by the company Hyperkin, who released cheat systems for newer consoles.

The original Game Genie systems were pass-through devices that attached between a cartridge and the console. Upon starting the console, the player is presented with a menu that they can use to enter a series of characters referred to as a "code", that reference addresses in the ROM of the cartridge. Each code contains an integer value that is read by the system in place of the data actually present on the cartridge. The Game Genie is covered by US Patent # 5112051, "Interfacing device for a computer games system", filed May 30, 1990. This patent expired on May 30, 2010, according to current US patent law.

Because the Game Genie patches the program code of a game, the codes are sometimes referred to as patch codes. These codes can have a variety of effects. Most published codes give the player some form of invulnerability, infinite ammunition, level skipping, or other modifications that allow the player to be more powerful than intended by the developers. In rare cases, codes can make the game more difficult or even unlock hidden game features that developers had scrapped and rendered unreachable in normal play.

The Game Genie sold with a booklet of codes for use with various games available for the system. However, new codes continued to be developed and new games were released after these booklets were published. To address this, Galoob created a paid subscription service where subscribers would receive quarterly code updates. In addition, Galoob also ran ads in certain gaming publications, such as GamePro, that featured codes for newer games.

To create new codes, it is possible to enter random codes into a Game Genie. This evolutionary approach is equivalent to using random POKE operations. Usually, entering random codes will result in no noticeable change in the game or freezing the game and possibly corrupting save data, but a useful difference may appear in the game if this process is repeated many times. One must write down the random codes for each attempt because there is no method to view the codes after starting the game. Once a useful code is discovered, making slight modifications to this code has a much higher probability of producing additional useful codes. With ROM files, emulators, and decompilers for these games and systems, it has become possible to reverse engineer games to find specific ROM data to modify. This information can be directly converted into Game Genie codes.

Around the time of the lawsuit from Galoob, Nintendo tried to use other methods to thwart the Game Genie, using ROM checksums in later titles intended to detect the cheat modifications. These measures were partially successful but some could be bypassed with additional codes. Later versions of the Game Genie had the ability to hide Genie modifications from checksum routines.

Sega, on the other hand, was a full endorser of the Game Genie, with their official seal of approval. One of Sega's requirements for this, however, was that the Game Genie wouldn't work with games that have a save feature, such as the Phantasy Star or Shining Force series. 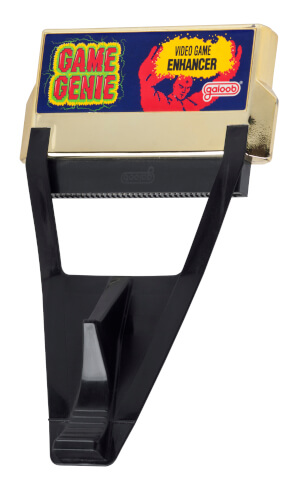 The Game Genie attaches to the end of the NES cartridge, causing the cartridge to protrude from the console when fully inserted, making the depression impossible. Therefore, the Game Genie was designed in such a way that it did not need to be depressed in order to start the game. This design put even more stress on the LIF socket than standard game insertion, bending pins and eventually causing units to be unplayable without the Game Genie present. The design of the Game Genie also made it very difficult to insert into a newer top-loading NES without pressing very hard. An adapter was created to deal with the problem, which Galoob offered to Game Genie owners free of charge,[6] but few were requested, and the stock was liquidated.

There also exists a version of the Game Genie for the Family Computer, distributed by Realtec and sold in areas where Famiclones were common. 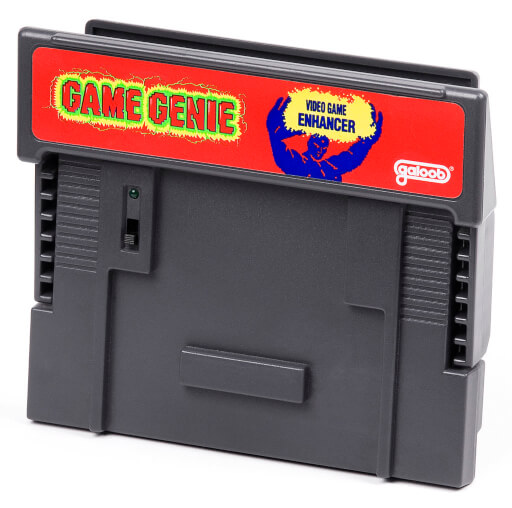 The Game Genie is incompatible with certain games, such as Star Fox and Super Mario RPG: Legend of the Seven Stars[9], because those games use the extra pins that most other Super NES games never utilize, as there is no circuitry to accommodate these pins of the games' PCBs. It also has problems with the SNS-101 remodel SNES. When used with a SNS-101, only two codes can be used at a time, and they must be entered on the top and bottom lines of the Game Genie menu. There are three known versions of the SNES Game Genie (v1, v1.1, v2). Images of v1 and v2 PCB have been posted and the difference is night and day, with v2 containing much fewer components on the PCB. All three versions look exactly the same from the outside but when v1.1 is booted up, it will have dashes present before any code is entered. The only way to tell v1 and v2 apart is by opening the cart and checking the PCB. 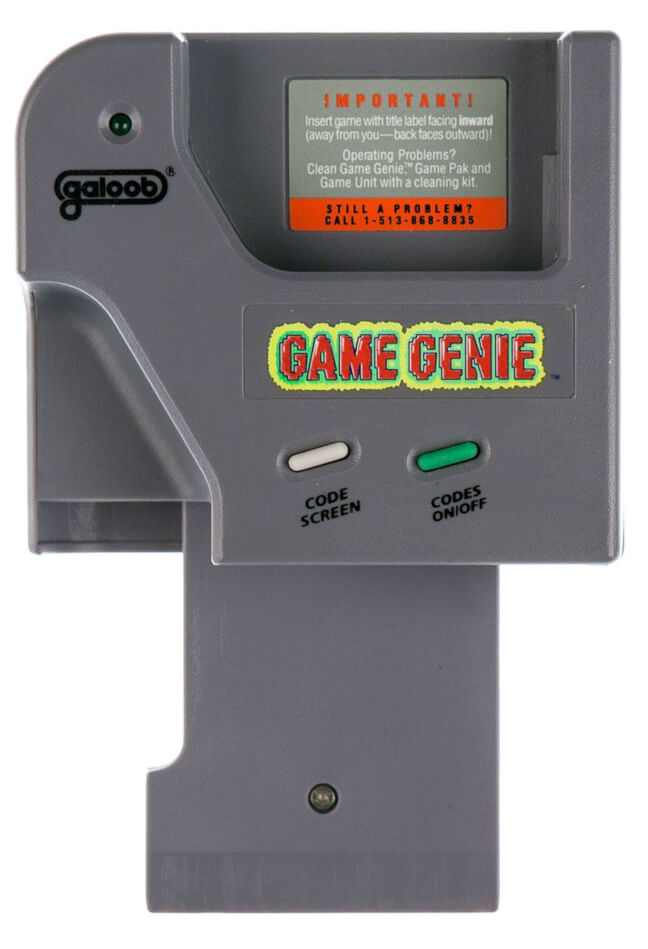 The Game Boy edition similarly has a slot for cartridges while itself needing to be inserted into the console's game slot. It has two face buttons for toggling codes on/off or to return to the code input screen, and it houses a compartment to contain a very small code booklet in the back. 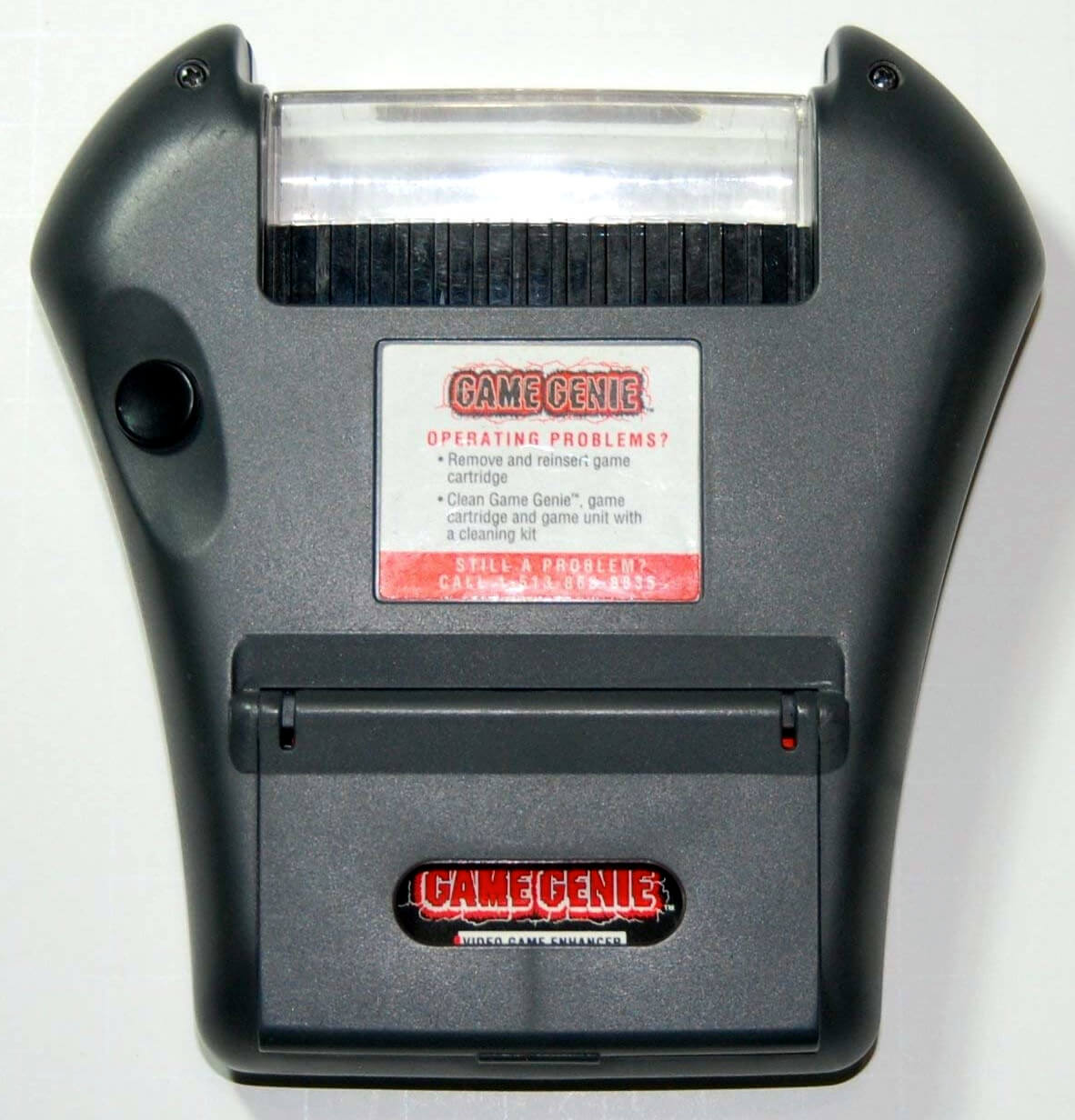 On the screen in which a code is entered for the Game Gear Game Genie, a player typing the word "DEAD" will cause the screen to move up and down, possibly as an Easter egg.

A substantially more powerful device was developed by Code masters for the Super NES, with many improvements including the ability for users to find their own cheat codes, to selectively activate cheats during gameplay using the game controller, to switch games into a slow-motion mode, as well as automatically save and restore the high-scores from games into battery-backed memory on the Game Genie device itself. A fully working prototype of the device was completed, but was not brought to market due to changes in market conditions. One prototype is known to remain in existence, in the possession of Richard Aplin, one of its original creators.