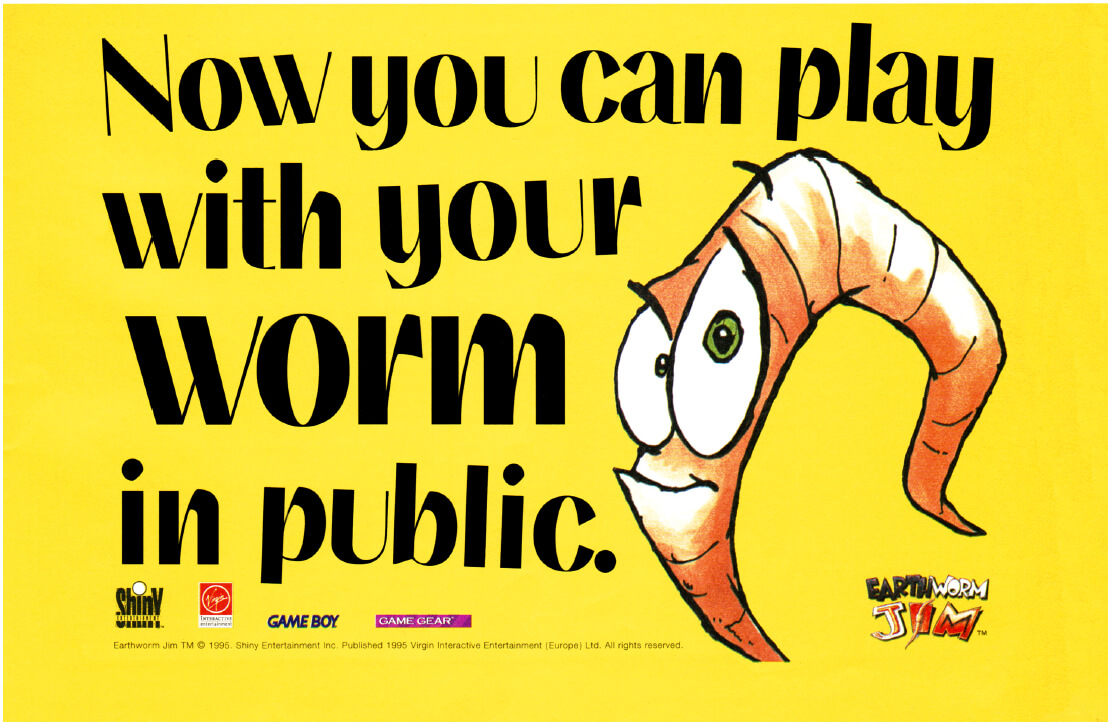 Description
A crow is chasing a worm named Jim while in outer space Psy-Crow is chasing a renegade ship. The ship's captain has stolen an ultra-high-tech-indestructible-super-space-cyber-suit and Queen Slug-for-a-Butt has ordered Psy-Crow to get it, since it can make her more beautiful than Princess-What's-Her-Name. Psy-Crow blasts the captain and the suit falls to Planet Earth.

Back on earth Jim wonders if he is finally safe when an ultra-high-tech-indestructible-super-space-cyber-suit lands on him. Luckily Jim rests in the neck ring of the suit. Then the space particles begin interacting with Jim, causing a light-speed evolution. Jim soon realizes he is in control of the suit.

Jim overhears the Queen's plans for the suit and decides to meet this Princess...

Reception
Earthworm Jim was the first game ever to receive a perfect score of 100% from the European gaming magazine Games Master.

References
The between-level races against Psycrow, called "Andy Asteroids", are most likely a reference to one of the game's programmers, Andy Astor.

Version differences
The PC and Sega CD versions add among other things, a new weapon not included on the original 16-bit console versions: the seeker missile.

Ending
Finishing the game in the easy difficulty setting shows you a different ending that consists of a rather verbose scientific description of earthworms, as well as their habitats, mating customs, etc.

From there, the game's design actually started with creator Doug TenNapel's simple sketch of an earthworm that he presented to Shiny Entertainment. Impressed, David Perry and the rest of Shiny bought the rights to Earthworm Jim from TenNapel, and started developing the game.[5] From there, TenNapel would work on doing the game design, creating level ideas, and voicing Jim's character, while Perry and the other programmers created other characters and game mechanics.

The game's crazy atmosphere, world, and characters was due to the fact that the company had previously always been restricted to doing licensed games, like 7up's Cool Spot, where they had to conform to the other company's preset limitations.

In that respect, the game was actually created as a satire of platform video games at the time; for instance, "Princess-What's-Her-Name" was a parody of how so many video games had throw-away female characters that exist only to be saved from danger. 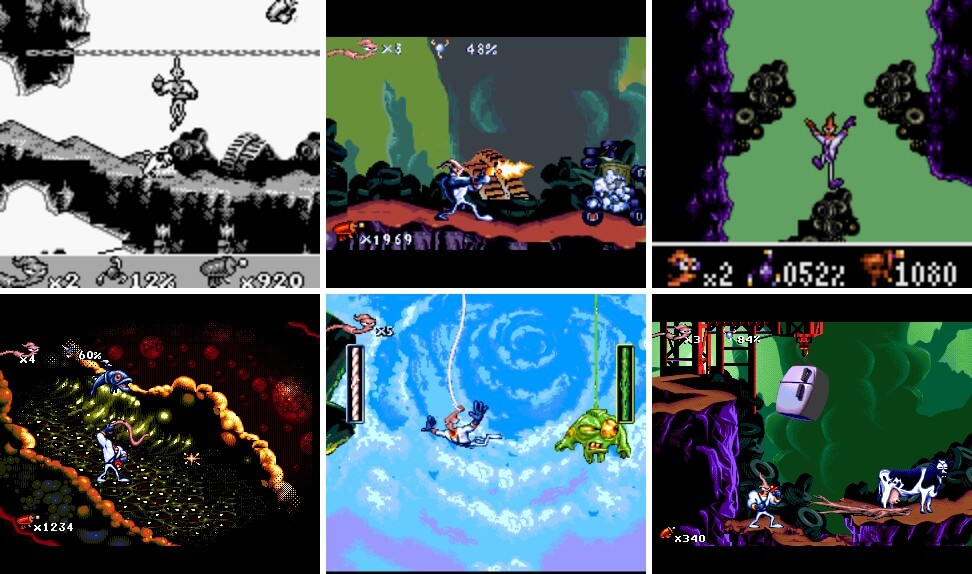 The resulting game would be the original Earthworm Jim. The game would play as a 2D sidescrolling platformer with elements of a run and gun game as well. The player controls Jim and must maneuver him through the level while avoiding obstacles and enemies. The player can use Jim's gun as a method of shooting enemies, or his head a whip for whipping enemies. The whip move also allows the player to grab hold of, and swing from, certain hooks in the game.

Some levels have additional requirements beyond merely getting to the end of the level. For example, the level "For Pete's Sake", involves making sure the computer-controlled Peter Puppy character gets through the level unharmed, which is accomplished by whipping him to make him jump over pits, and defeating enemies before they can damage him. Failure to do so results in Peter lashing out at Jim, taking away from his health.

The developers also created a wide variety of colorful villains for the game as well, including Psy-Crow, Queen Slug-for-a-Butt, Evil the Cat, Bob the Killer Goldfish, Major Mucus, and Professor Monkey-For-A-Head.

A special version of the game entitled The Great Earthworm Jim Race was broadcast in 1995 for the Sega Channel. The game featured an increase in difficulty level and a secret room which, when reached by the first 200 players, would display a password and a toll-free telephone number. Those that called the number were awarded special prizes.[10] Shortly afterwards, the same development team started work on a sequel. 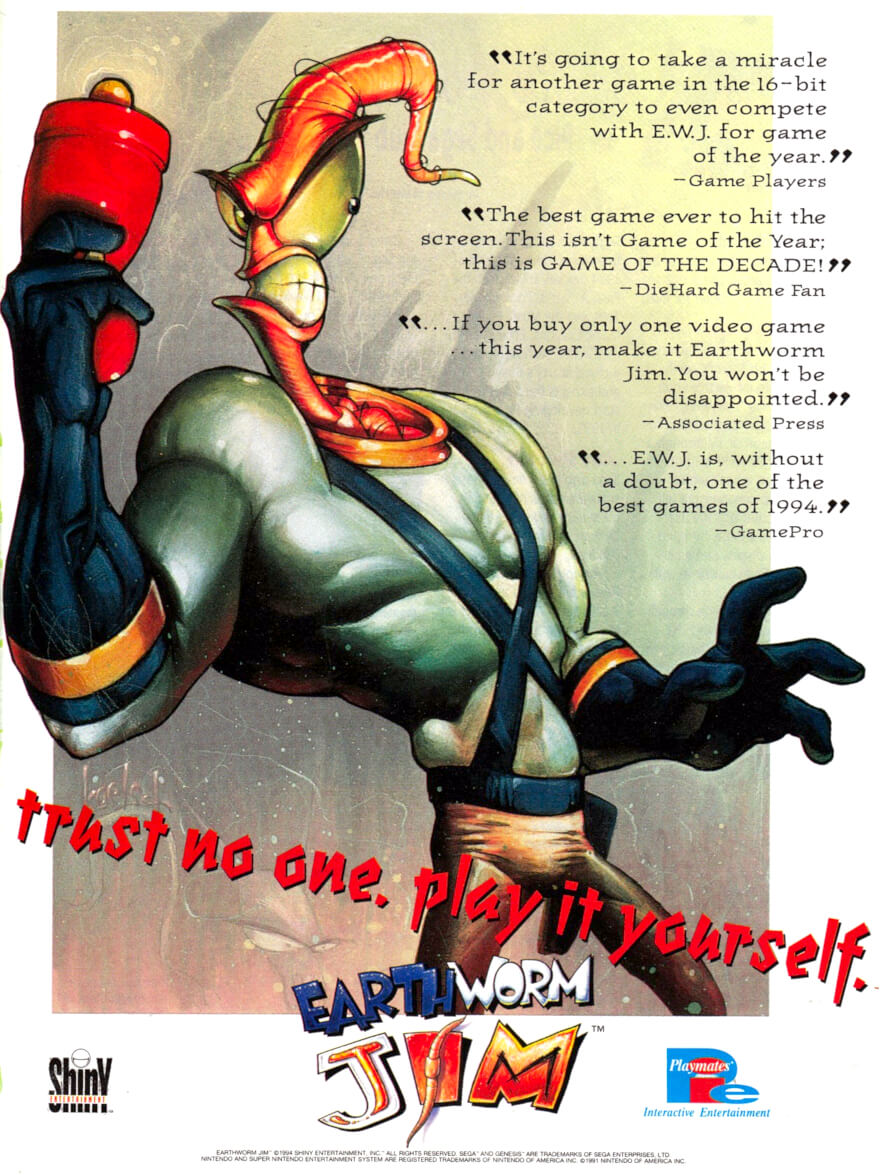 Earthworm Jim also starred as a fighter on Interplay's Nintendo 64 title Clay Fighter 63 1/3 in 1997 and the Blockbuster rental title Clay Fighter 63 1/3: Sculptors Cut in 1998. In the original, Jim was a default character, however in the Sculptor's Cut, he was required to be unlocked. Also in the game, he and Boogerman hold a strong rivalry between one another.

A line of Earthworm Jim toys and action figures was released in late 1995. In 1995 Marvel Comics published a 3 issue comic based on the character. In May 2019 Doug TenNapel raised money through Indiegogo to self publish a new Earthworm Jim graphic novel.

Shiny has also made references to Earthworm Jim in its later titles; their game Sacrifice features an earthworm-like god of earth called James, and there were additional references in the game MDK. Earthworm Jim also appears as a secret character in the first Battle Arena Toshinden game for PC. 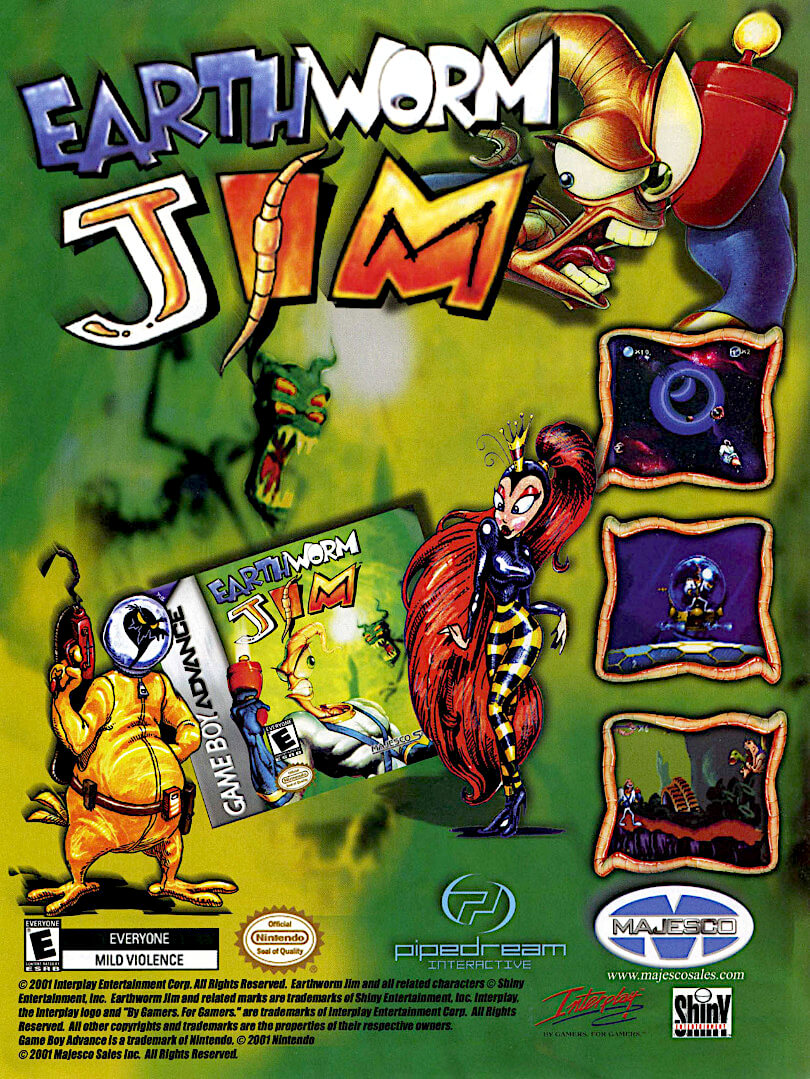 Television series
Universal Cartoon Studios made an animated series based on the Earthworm Jim series of video games, and it ran for 23 episodes in 2 seasons from 1995 to 1996 on the Kids' WB programming block on The WB Television Network. The show maintains much of the absurdist and surreal humor of the original games, as well as introducing its own features.

Most of the episodes revolve around one of Jim's many villains trying to reclaim the super suit, or otherwise causing mayhem through the galaxy. Actor Dan Castellaneta, who voices Homer Simpson on the animated television show The Simpsons, voiced Earthworm Jim in the animated series. 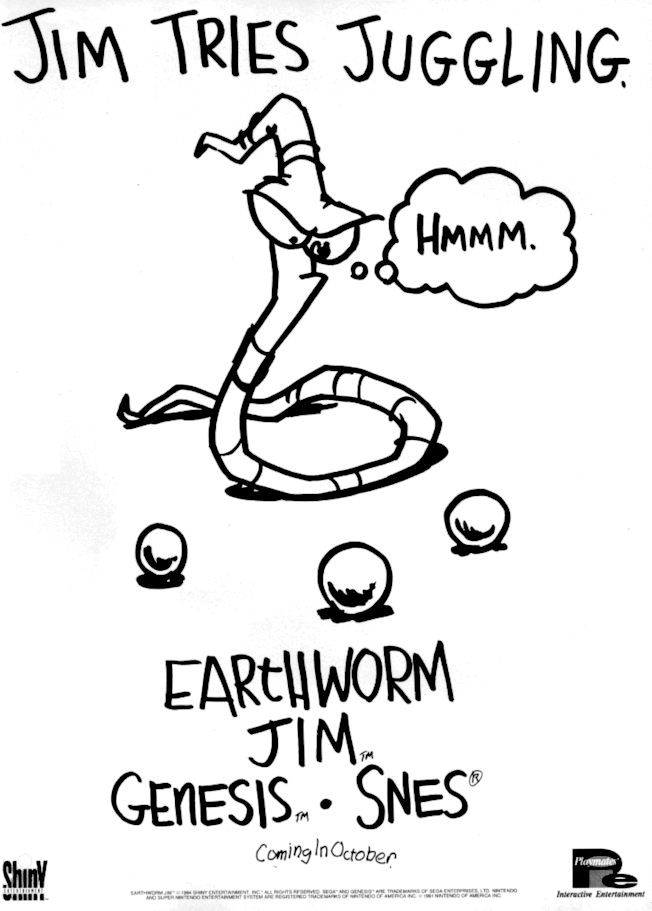 Follow-ups/sequels
Four games were released in the series:

The series lay dormant for almost a decade before Gameloft remade the original game in HD for PlayStation Network and Xbox Live Arcade in 2010. Interplay announced Earthworm Jim 4 in 2008, but little has surfaced since. 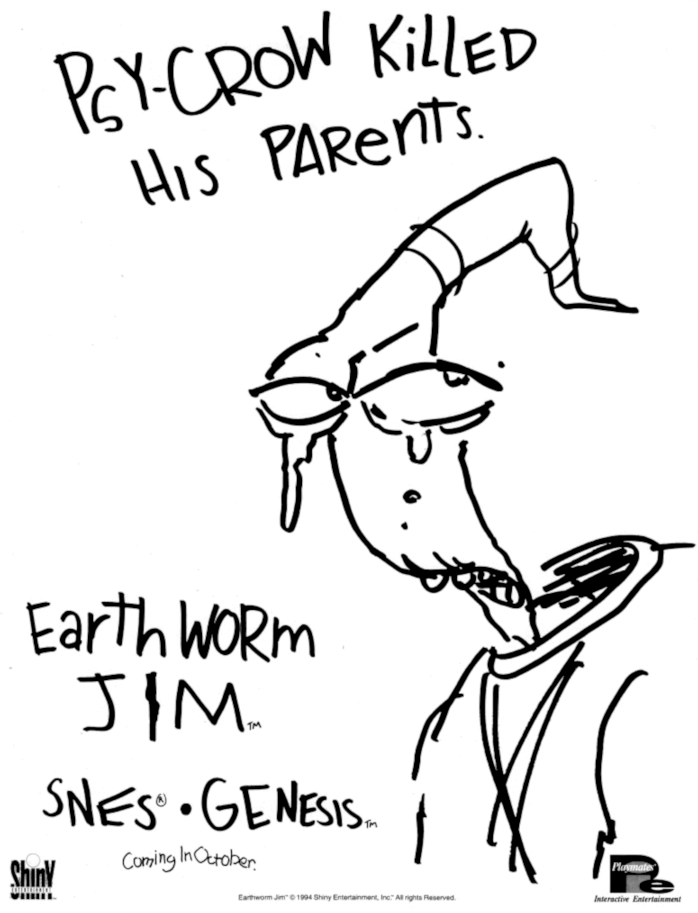 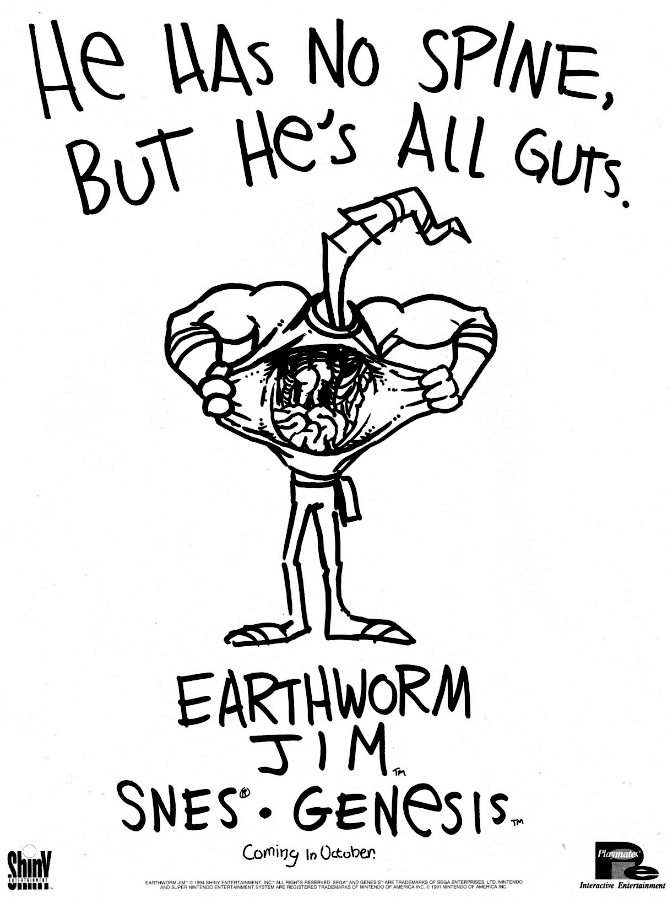