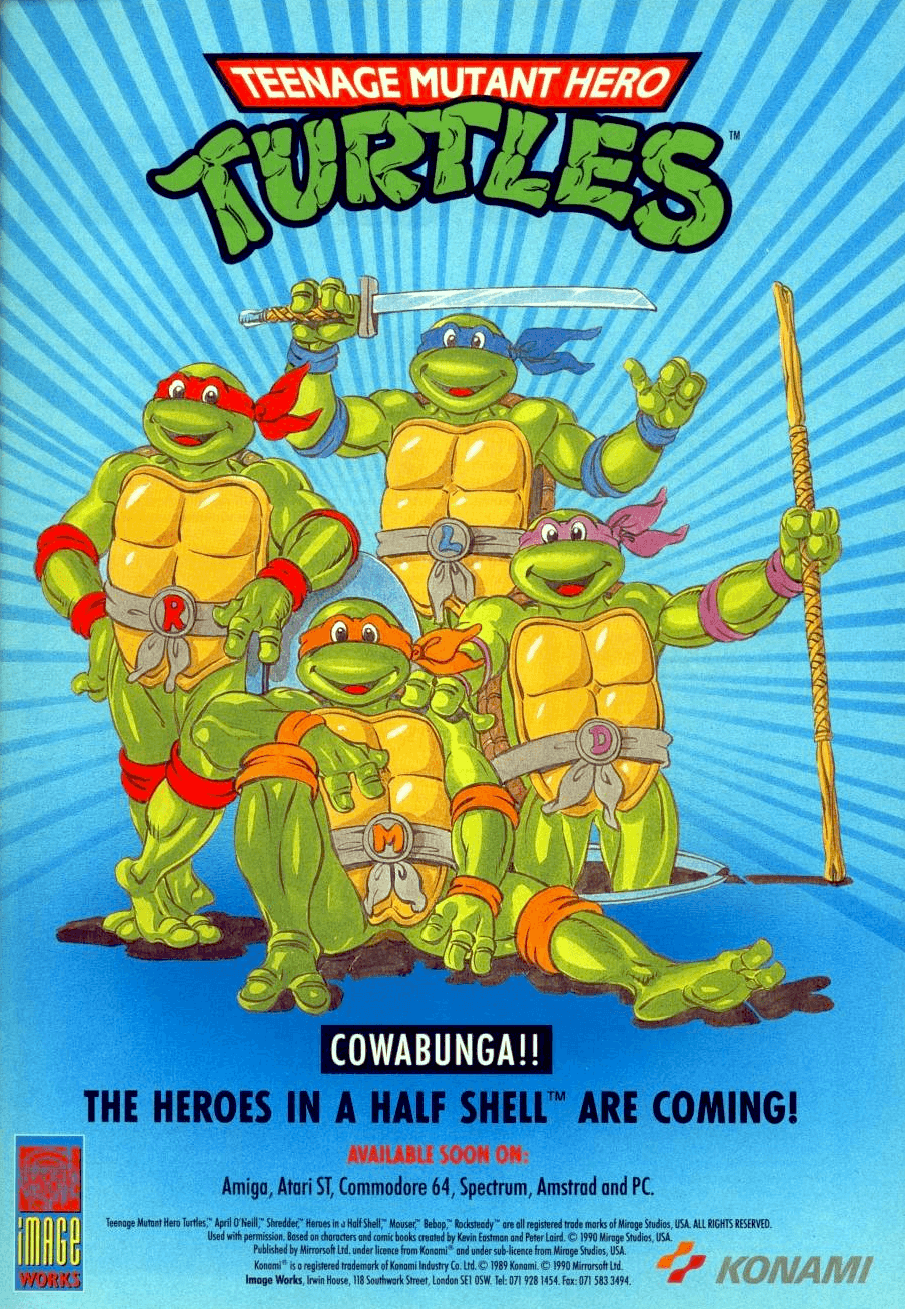 Teenage Mutant Ninja Turtles is a 1989 side-scrolling platform game for the Nintendo Entertainment System [initially] released by Konami.[2] In North America it was published the Ultra Games imprint in the USA and the equivalent PALCOM brand in Europe/Australia.

Alongside the arcade game [https://imgur.com/a/bWnMfYJ] (also developed by Konami), it was one of the first video games based on the 1987 Teenage Mutant Ninja Turtles animated series, being released after the show's second season.

Description
With April O'Neil held hostage by The Shredder's thugs, Bebop and Rocksteady, once again, it's up to the Teenage Mutant Ninja Turtles to come to her rescue! Play as all four of the turtle heroes, rescue April, and then rescue your sensei Splinter from Mecha-Turtles clutches, and then go after The Shredder deep in the bowels of The Technodrome itself.

Teenage Mutant Ninja Turtles is an action game based on the late eighties/early nineties cartoon series of the same name. Play as Leonardo, Michaelangelo, Donatello and Raphael (one turtle only, but the ability to swap between turtles at any time) as you save your friends and battle The Shredder and his cronies. There are no 'lives', as such - when you lose a turtle, he becomes 'captured', and you cannot use him again until you rescue him from a place hidden in the overworld.

Gameplay takes place in two perspectives: a top-down view, which lets you run around and explore buildings, sewers and other places. When entering places from the top-down view, the perspective shifts to a side-scrolling view, where most of the battling takes place. In addition to each turtle's main weapon, sub-weapons (such as shuriken) can be acquired, to use at foes - these have a limited use.

Regional differences The game was released for the Family Computer (or Famicom) in Japan a few months earlier than the American NES version under the title Geki Kame Ninja Den (Japanese: 激亀忍者伝, which loosely translates to "Legend of the Radical Ninja Turtles")[2] This was the first T.M.N.T. product released in the country, predating the Japanese dub of both the first film and the animated series.

Subsequent T.M.N.T. video games released in Japan kept the franchise's original title. While graphics and gameplay are virtually identical to its NES counterpart, the Japanese localization changed the plot a bit by turning April O'Neil from an acquaintance of the Turtles into Splinter's daughter.[3]

The game was released as Teenage Mutant Hero Turtles in all European territories. The Australian version was released with the series' original title (Australia always used the "ninja" title), with a different box.

Copy protection
TMNT was one of a few games from the period that featured copy-protection via a code sheet printed on so-called "copy proof" paper. This is dark maroon paper with black ink which most black and white copiers would not be able to copy in a readable form. The code sheet which was stapled into the game manual, featured hundreds of four digit numbers in a grid which you needed to look up to get into the game.

Buggy DOS version
The DOS version of the game released in the USA is infamous on its own right. Apart from being usually derided as a poor game (nothing unusual when it comes to games covering comic book, film or TV licenses), a glitch made it impossible to reach the end of an intermediate stage. The only way to reach the further stages was by using passwords. Apparently the UK version of the game (labeled as "Teenage Mutant Hero Turtles", as opposed to "Ninja Turtles") corrected this bug and can be finished without cheating.

Cover art
The reason why the Turtles all wear red masks on the cover [US/Canadian box arts] is because that's how it was in the comics.

References
In the movie The Wizard, Jimmy is seen playing the Teenage Mutant Ninja Turtles at the arcade at the Casino in Reno. 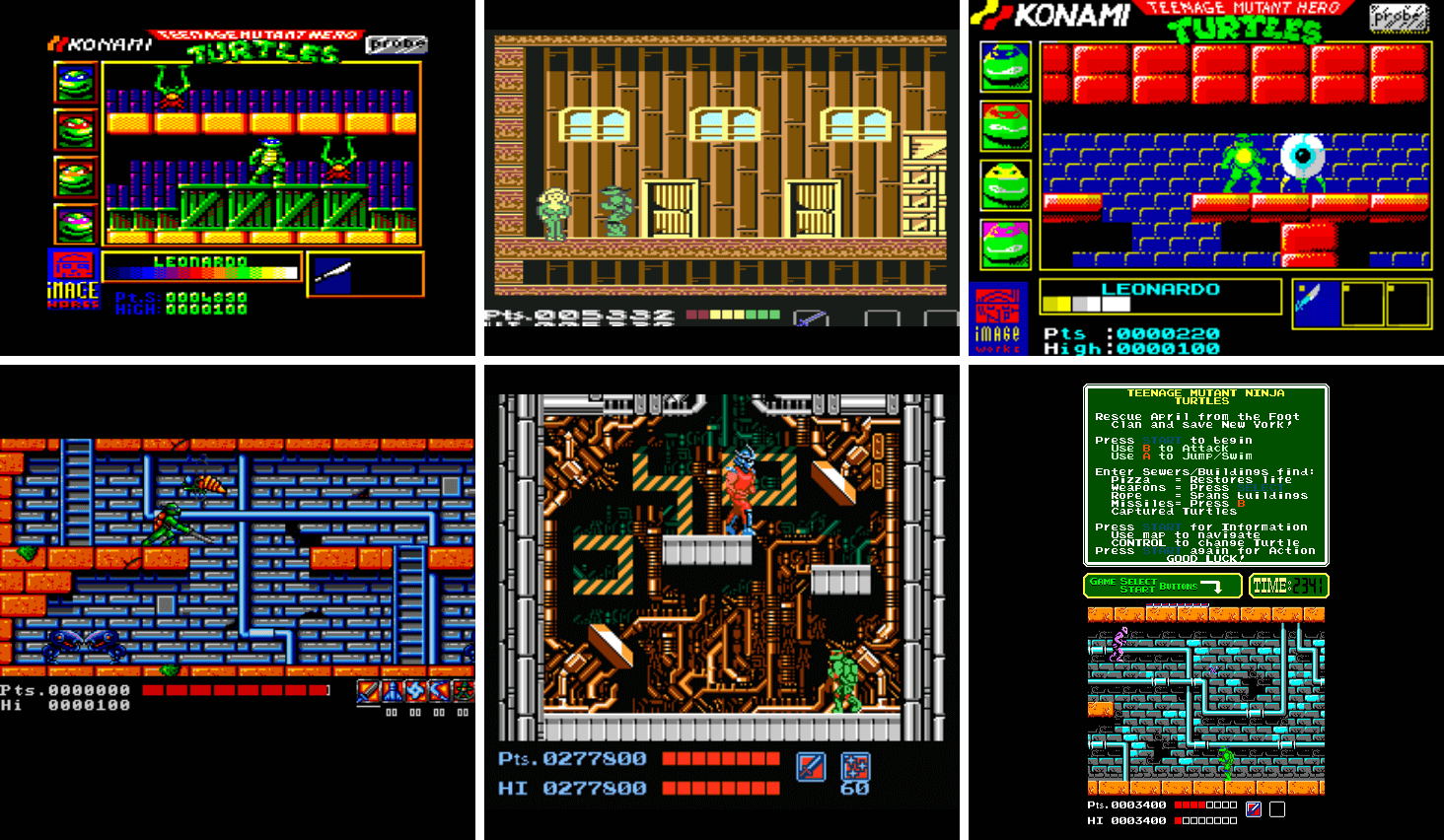 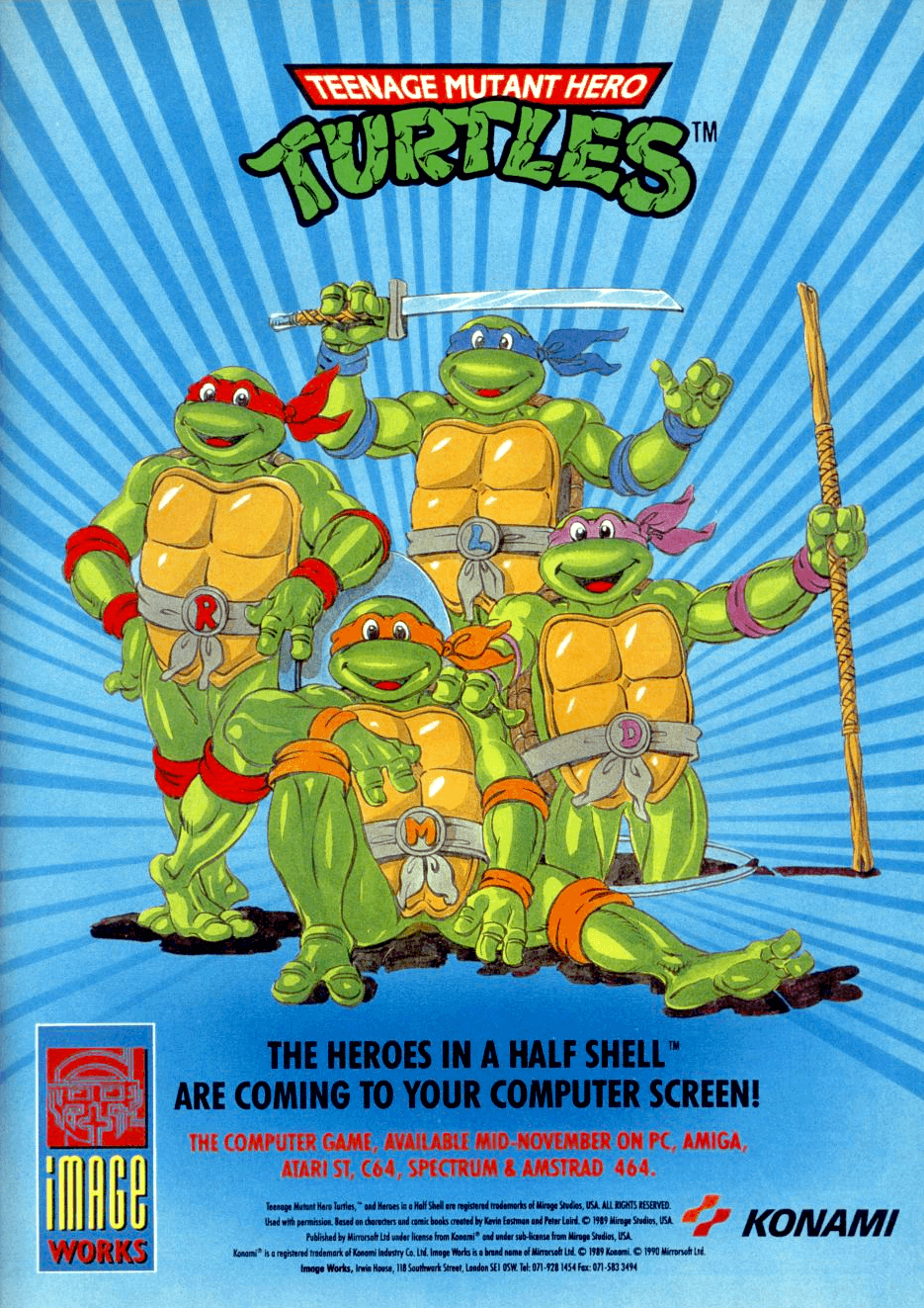 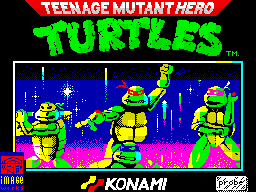 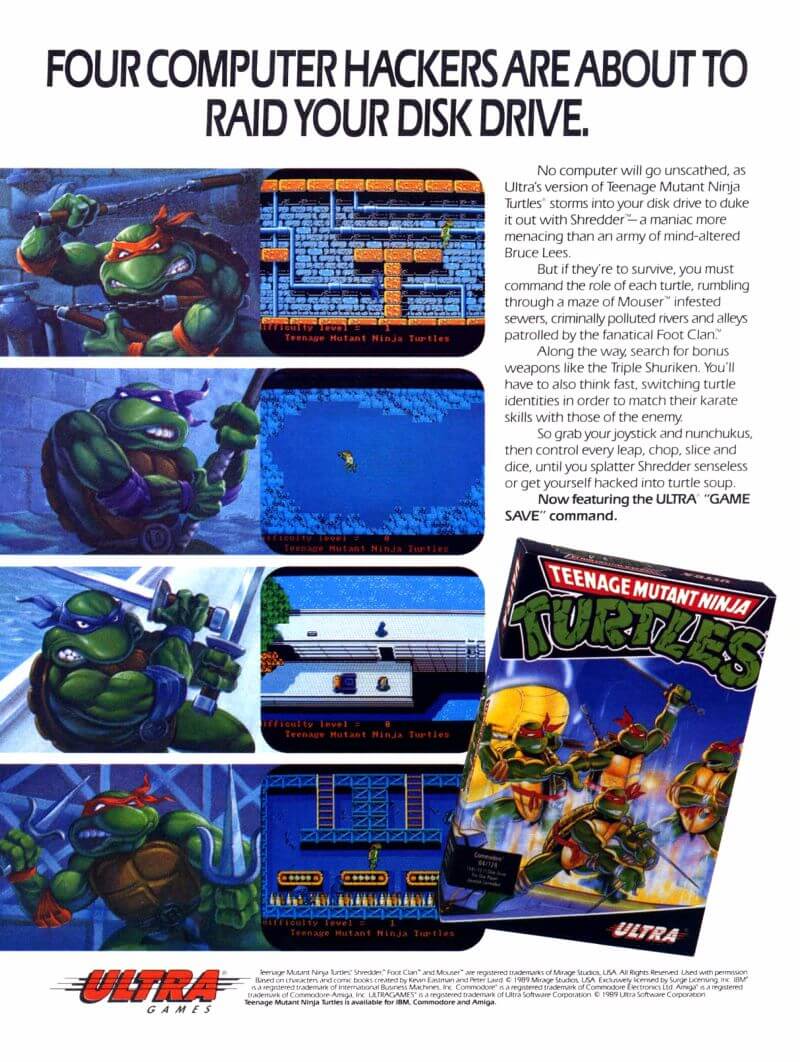 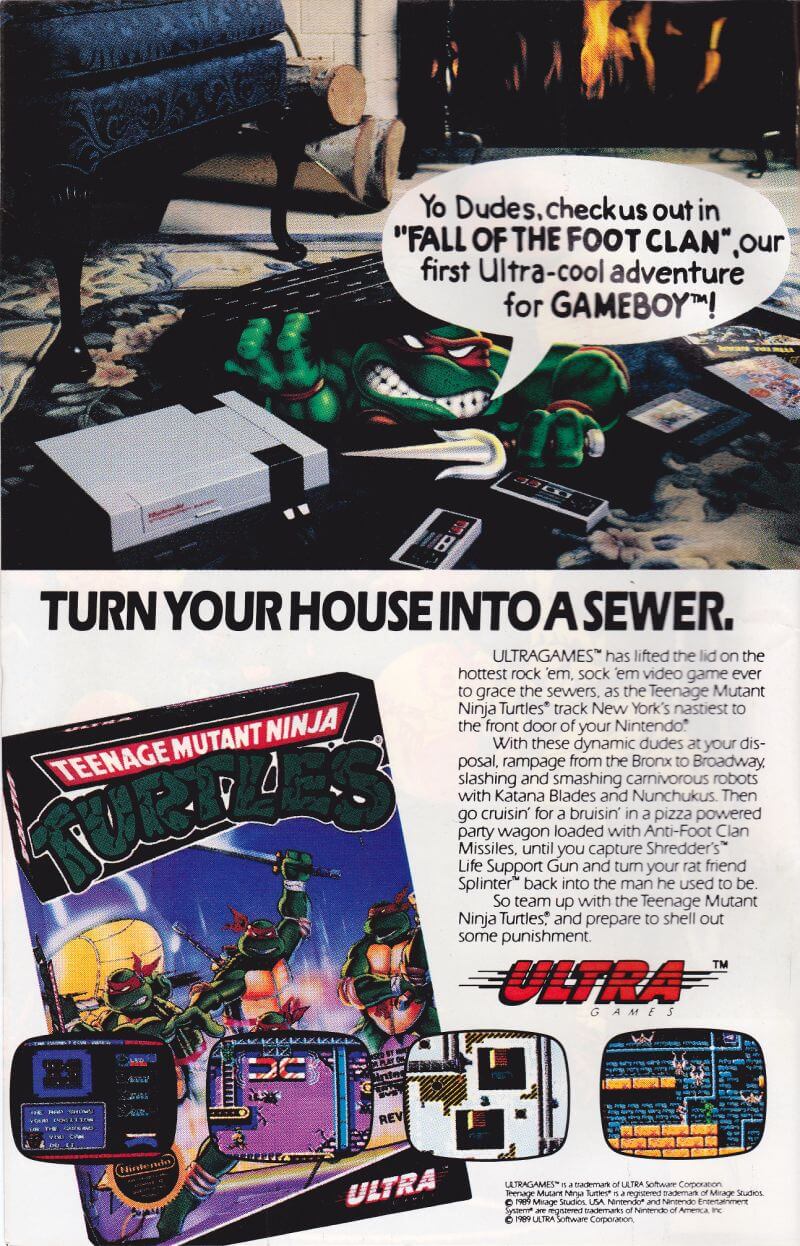