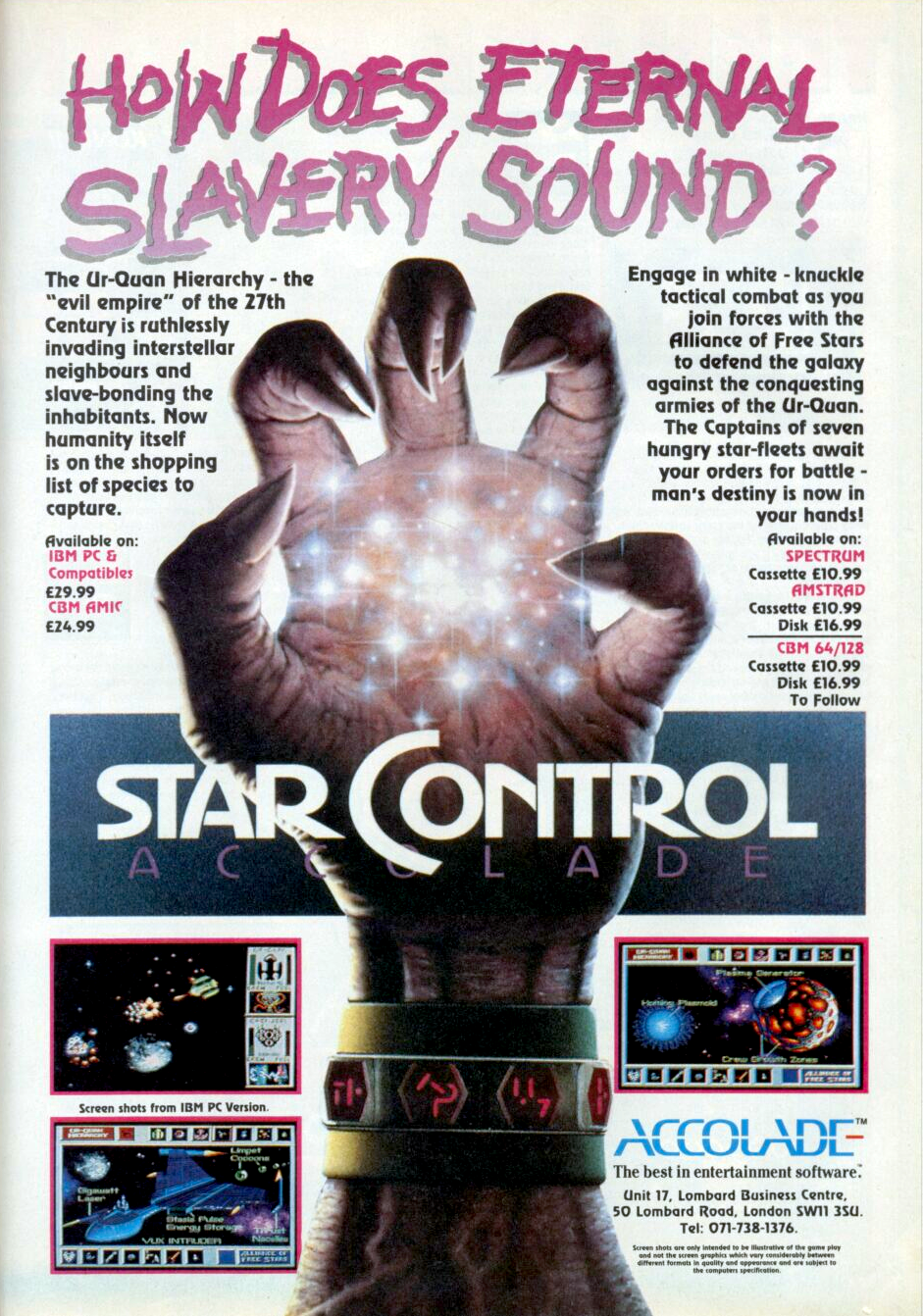 Description Star Control is a science-fiction wargame which pits the forces of the Alliance of Free Stars against those of the predatory Ur-Quan Hierarchy. The games are designed so that you can ease into play, familiarizing yourself with menus, options and player controls. The Alliance and Hierarchy each possess different types of warships. Each vessel has its own maneuvering and firing characteristics, plus a unique special power that you can employ when circumstances dictate.

The game has two modules: the Melee, in which you can simply blast the computer or another player to smithereens using one of 16 different ships, in either Hierarchy or Alliance fleets; or, should you wish for a more challenging game, lets you play one of 9 preset scenarios.

Inspiration The "special thanks" in the manual list off an equally large number of sci-fi authors whose work in some way influenced the game. It's fairly rare for game designers to be so rigorous in documenting their inspirations.

References The vast majority of captain names in the game were taken from various famous and semi-famous sci-fi sources. (far too many to list here. For example, there's a Syreen Captain Alia (from Dune) and an Earth Captain Pike (from Star Trek))

Title From almost the very beginning of his video game design career, Paul Reiche III has revisited the theme of pitting varied teams of carefully balanced but widely varied opponents against each other, first in 1983's Archon and most recently in 1998's The Unholy War (and its Japanese analogue, Little Witching Mischiefs).

Star Control also falls in the middle of this chain, and its heritage is plainly spelled out phonetically in its abbreviation:

Rampant slowdown marred much of the core gameplay on the Genesis, much to the chagrin of the creators, who were not given the time by Accolade to optimize the gameplay for the platform.[2][3] This led to a lawsuit between Accolade and Sega of America. At the time, Sega regulated the release of third-party software through a licensing arrangement, which Accolade had bypassed (by creating their own development systems). Although the lawsuit was settled in Accolade's favor, setting an extremely important legal precedent, the company later became a licensed Sega developer.

Star Control was touted as the first 12-megabit cartridge created for the system. Because it was a cartridge-based game with no battery backup, the Genesis port lacked the scenario-creator of its PC cousin, but it came pre-loaded with a few additional scenarios not originally in the game. Accolade published the game under a then-new company label, Ballistic.

Star Control II: The Ur-Quan Masters was written by Toys for Bob (Fred Ford and Paul Reiche III) and originally published by Accolade in 1992 for MS-DOS; it was later ported to the 3DO with an enhanced multimedia presentation, allowed by the CD technology. When the original creators released the source code of the 3DO version as open source under the GPL in 2002, an open-source project was created aiming to create an embellished remake called The Ur-Quan Masters.

Star Control 3 was developed by Legend Entertainment, hired by Accolade to create a sequel when the original creators expressed disinterest in creating a sequel for the same amount of money they were paid for Star Control II (which left them working for several months without pay).[citation needed] Star Control 3 features some of the same races as previous games, as well as new ones. It was released for MS-DOS and the Macintosh in 1996. Toys for Bob was not involved in the development of this game in any way. The story expanded on the mystery of the Precursors' disappearance and introduced new enemies in the form of the Hegemonic Crux, however, it also removed several aspects of game play present in Star Control II, such as the ability to modify the equipment and capabilities of the player's flagship. Star Control 3 was used as a visual showcase of computer technology at the time of its release.

Star Control 4, or later StarCon, was Accolade's final attempt at profiting from the franchise. Few details are known, as Accolade reshaped and eventually cancelled it during the development stages; however, the Harika had been confirmed as a returning alien race. While originally touted as another space adventure, the idea quickly changed into an action-oriented combat title, to be viewed largely from behind the ship, with gameplay similar to Psygnosis' Colony Wars series, somewhat like a shooting-oriented X-wing fighter.

Star Control: Interbellum is a novel written by William T. Quick set in the Star Control universe. It was first published in 1996, shortly after the release of Star Control 3. Several details in it are inconsistent with the games, especially the depictions of the alien races.

In September 2007, Atari put online a simple Flash game with the name "Star Control" on the Atari Play website. This game was created by independent game developer Iocaine Studios. Atari ordered the creation of the game, to be delivered in just four days.[citation needed] The web page containing the Flash applet has the title "Welcome to the Star Control Preview", suggesting that there is more to come. As of August 2011, there has been no news of further developments. The gameplay resembles the 1962 game Spacewar!, a spiritual ancestor of Toys for Bob's original Star Control.

Meta-data of images inside the Flash applet show a modification date of either 2007-09-16 or 2007-09-17, suggesting that this was the weekend during which the game was created. One day later, images of this game were used in Atari's Declaration of Use in Commerce submitted to the United States Patent and Trademark Office with Atari's application for renewal of the Star Control trademark.[9] The suspicious timing, together with the simple nature of the game and the fact that the game had to be delivered in just four days, has led some to believe that the game was created specifically for the purpose of retaining the Star Control trademark.[citation needed]

Cancelled games and sale to Stardock

On April 11, 2006, Alex Ness (Producer of Toys for Bob) wrote an article on the Toys For Bob website, titled "Star Control Sequel - Get Out Of My Dreams". It stated that Toys For Bob had been working on a new, unnamed title for the previous year, and that it was scheduled to come out in early November. Near the end of the article, he hinted that "if enough of you people out there send me emails requesting that Toys For Bob do a legitimate sequel to Star Control 2, I'll be able to show them to Activision, along with a loaded handgun, and they will finally be convinced to roll the dice on this thing." (quote:Alex Ness)

On April 16 that same year, the Ur-Quan Masters website added an article to their page titled "Toys for Bob want another Star Control and need your help!" It gives a link to a petition page with a form that would e-mail a message to Alex Ness, so that users would not have to open any other third party clients. In addition to an e-mail form, the mailing address of Toys For Bob was also given on the website. Since the mention of the possibility of a new Star Control game, the number of visits to the Ur-Quan Masters and Star Control Timewarp website has doubled.

On April 28, Ness wrote another article titled "Only 997,700 more emails to go!", stating that he has received around 2,300 e-mails on that day, with a long way to one million. With the time passed since April 28, 2006, the number has increased to almost 10,000. He then made joking references that both Jack Black and Steven Spielberg are fans of Star Control. On October 18, Alex Ness wrote another article about finishing development of Tony Hawk's Downhill Jam. Regarding a new Star Control game, he mentioned that he does not have any news regarding the development of a new Star Control game with Activision, but he mentioned that Activision must realize that "this isn't just some flash-in-the-pan, support-of-reviving-an-old-franchise craze".

In 2008, Stardock CEO Brad Wardell had expressed interest in purchasing the rights from Atari and creating a Star Control sequel.[10] However, negotiations between Stardock and Atari fell apart. As Atari liquidated its assets as part of a chapter 11 bankruptcy in 2012,[11] Stardock had the winning bid in an auction of Atari's franchises and acquired the rights held by Atari over the game in July 2013 [12]. It was announced in 2014 that Stardock had started a Star Control reboot;[13] The Star Control website and forums were also relaunched.[14] 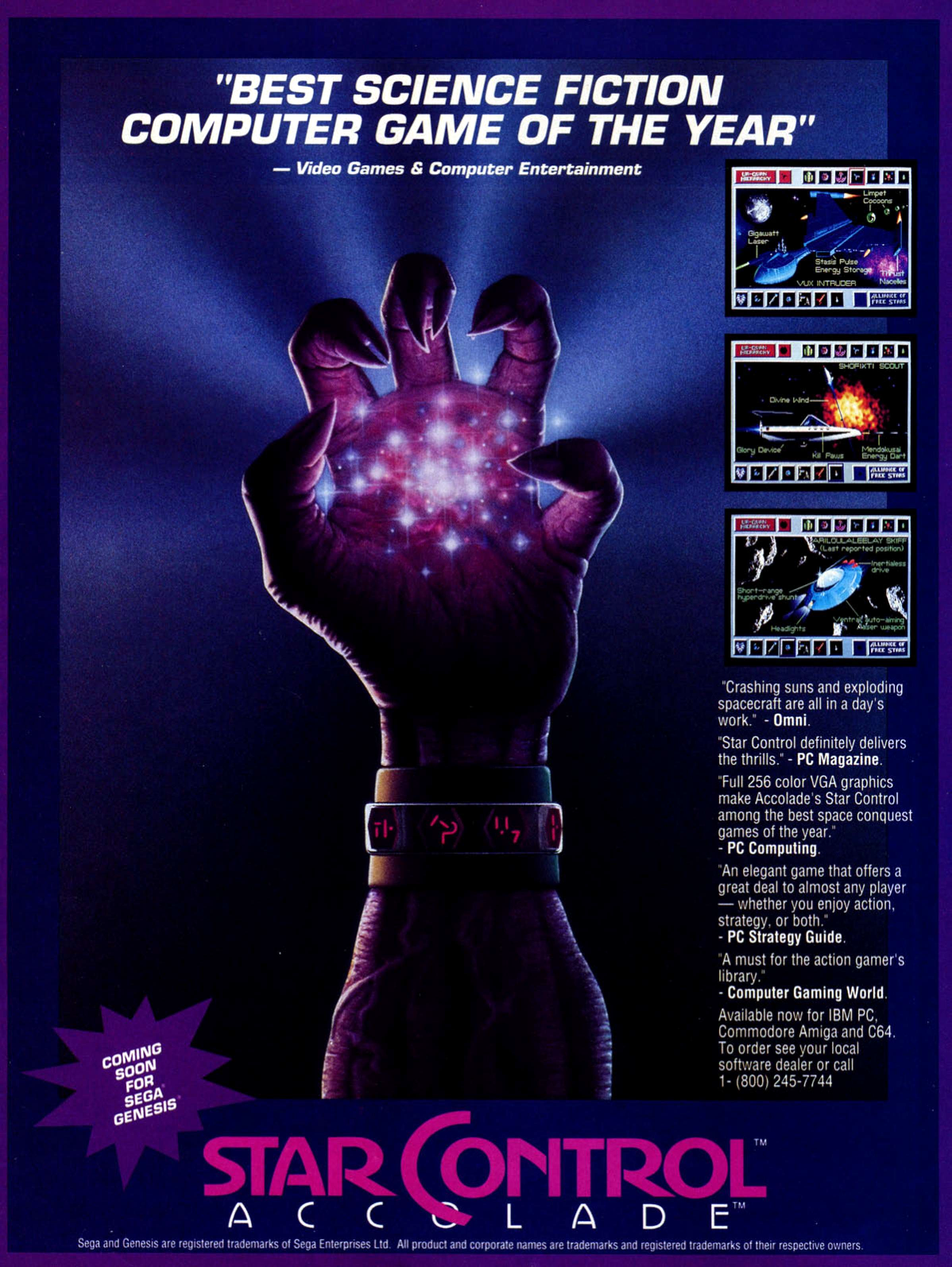