Eye of the Beholder - Video Game From The Early 90's 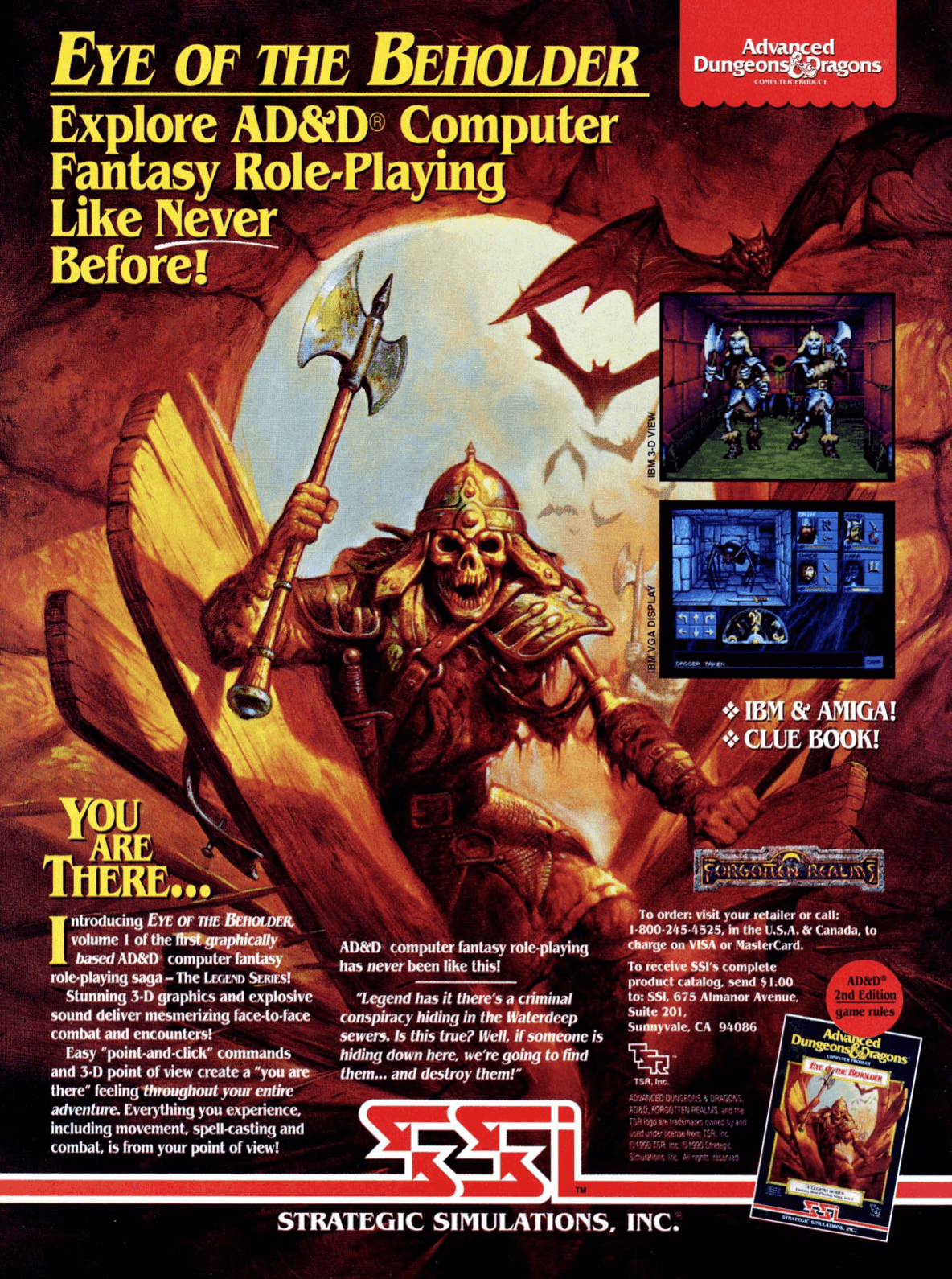 Description
Something evil is lurking below the city of Waterdeep. The Lords of Waterdeep summon a group of heroes to investigate, but someone or something has been watching the proceedings. After the heroes enter the sewers, the ceiling collapses behind them. The only way out is the way down, into a dungeon filled with monsters, traps and puzzles.

Eye of the Beholder is a dungeon crawler RPG with a first-person perspective based on the 2nd Edition AD&D rules. The starting party consists of four characters and up to two NPCs can join later. Combat and magic happen in real time, similarly to Dungeon Master. There is a variety of monsters to fight and spells to cast. The game features a point-and-click interface for fighting, spellcasting and handling objects.

Cancelled Lynx port
This game was being ported to Atari's Lynx by NuFX, Inc., but development was halted. Prototypes have since been leaked to the internet.

Boss
The final big boss, Xanathar is actually The Beholder, as he (is it he? or was it she? :-) says to you (when you get to the endgame for final confrontation) that all those traps you encountered, and minions you fought was just a play to watch, and that he was watching you all the way (that only gets him beholder title). Now, as you can notice, he looks like a big bowling eye, with many pipes that ends also with an eye (that gives him eye title). So, Eye of the Beholder would actually be himself.

As in this game he's the main bad guy, in Eye of the Beholder II, there are actually many creatures that are from his race, and are no such threat.

Ending
Eye of the Beholder was praised for its stylish cinematic opening sequence, which dazzled players and set the stage of the game to follow. However, since the final game's size weighed in at 5 3.5" disks, SSI decided to cut the ending cinematic, figuring very few players would see it anyway, and it was not worth the extra cost of the sixth disk.

However, many players who did slog it out to the end of the game and were not amused when they were "rewarded" with a simple text message and unceremoniously dropped to DOS. SSI soon realized their mistake, but the damage could not be undone. Many players assumed the game simply never had an ending, never suspecting it existed but was not included.

The Amiga version was later released with the final endgame graphic.

Also, there was one bit of the ending that most players never saw. Players were able to do what the developer's called the "EoB Two-Step," side-stepping, turning and side-stepping again, they were able to fight many monsters including the boss with risk of taking much damage. It was possible, though time consuming, to use this technique to kill Xanathar. This is not the way the game's designers had in mind for his defeat though. The player were supposed to lure and push Xanathar into one of the spike traps where there was a small animated sequence (basically 4 frames) of him being impaled and dying.

Related games
Several modules for Neverwinter Nights (2002) have been created by fans as remakes of the original Eye of the Beholder game.[23][24] A team of Indie game developers led by Andreas Larsson did a fan conversion of the game for the Commodore 64.[25]