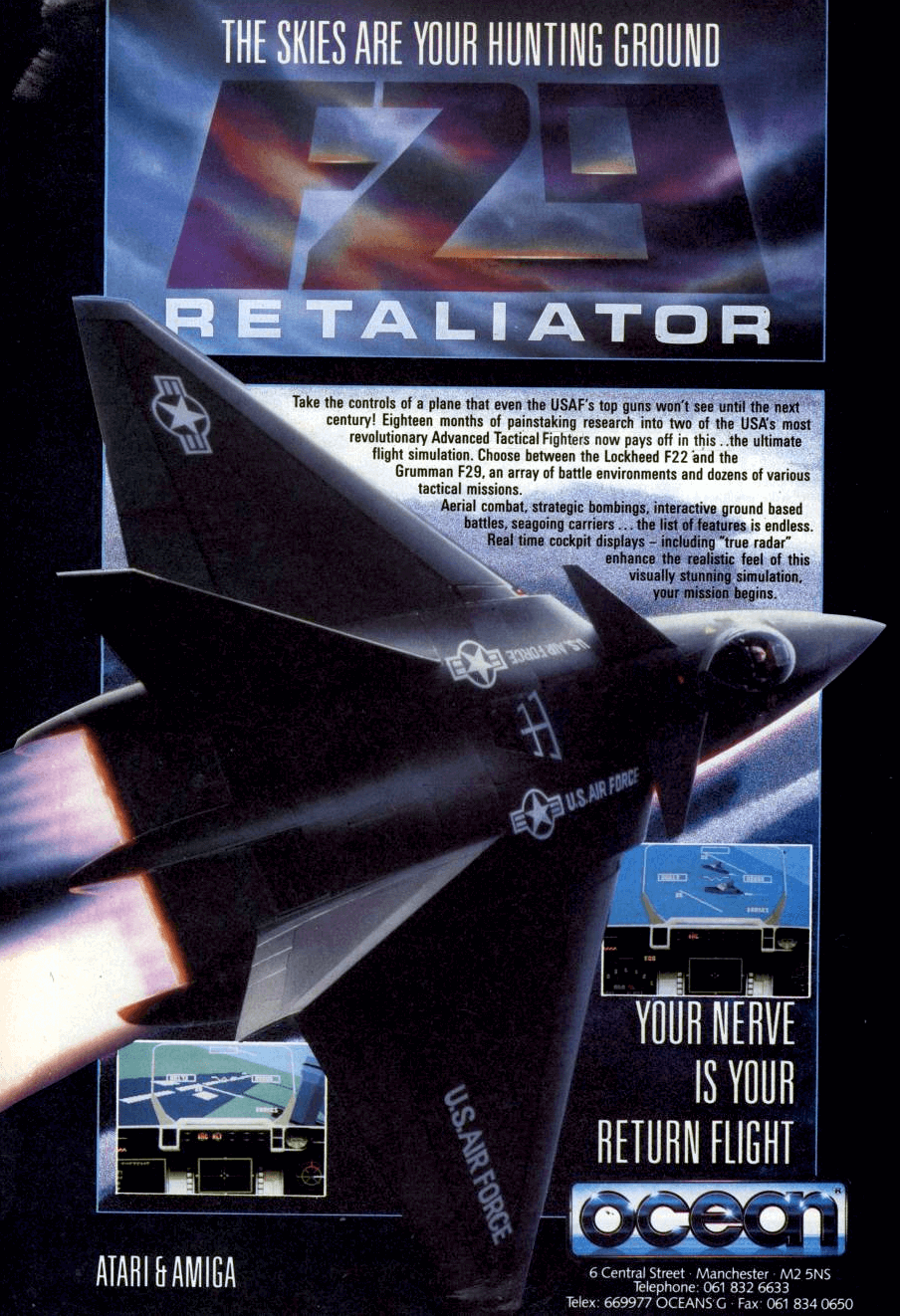 Description
The title is a combat flight simulator that puts you in the cockpit of either the F-22 or the fictional F-29.

The game includes four war scenarios (Arizona desert test and training sites, Pacific conflict, Middle East conflict and the World War III in Europe) each with several missions, with the total number of those adding up to 99. The last mission of the game can be any of three, and completion of each one leads to different game endings. The PC version allowed head-to head dogfighting using a null modem cable.

The graphics were detailed by the standards of the period, featuring cities, bridges, roads, islands, mountains and moving vehicles. The cockpit of either the F-22 or the X-29A has three multi-function displays available to set up in a number of configurations. The fantastic "future" weapons to choose from include a fighter-carried Tomahawk cruise missile, rearward-firing AIM-9 Sidewinder air-to-air missiles and a gigantic cluster bomb.

Trivia
The game was developed during the end of the Cold War, based mostly on speculations on then-future aircraft that were expected to be in use by the year 2002, in particular based on the design of the Lockheed Martin F-22 and the Grumman X-29A.

Bugs
This game is widely regarded as being quite bugged. One amusing example I'm aware of is that, even after you eject, you still have control of the plane, so it's actually possible to hit yourself with it.

F22
The (real) F22 on the box covers looks nothing like the (fictional) F22 that is actually in the game. Also, contrary to what many believe, the F29 does exist (though not as a fighter), as the X29 experimental aircraft and, in contrast to the above mentioned F22, the F29 and the real X29 look the same.

The Amiga and Atari ST box art, as well as the title screen image in all versions, is based on Lockheed Martin concept art. It's a painting by Syd Mead made in 1988 of the then secret F22 fighter plane, aka the Advanced Tactical Fighter.

Legacy
A "Special Mission" add-on was released with ZERO magazine in 1990, featuring a battle against the alien spacecraft from the then-upcoming space combat game EPIC.[7] Retaliator 2, announced in 1990 to be released in the first quarter of 1991,[8] was never released as the team concentrated on finishing EPIC (released in 1992 and using an improved engine of F29). However, DID would later create three further, much more realistic F-22 simulators: TFX (1993), F-22: Air Dominance Fighter (1997), and F-22 Total Air War (1998). 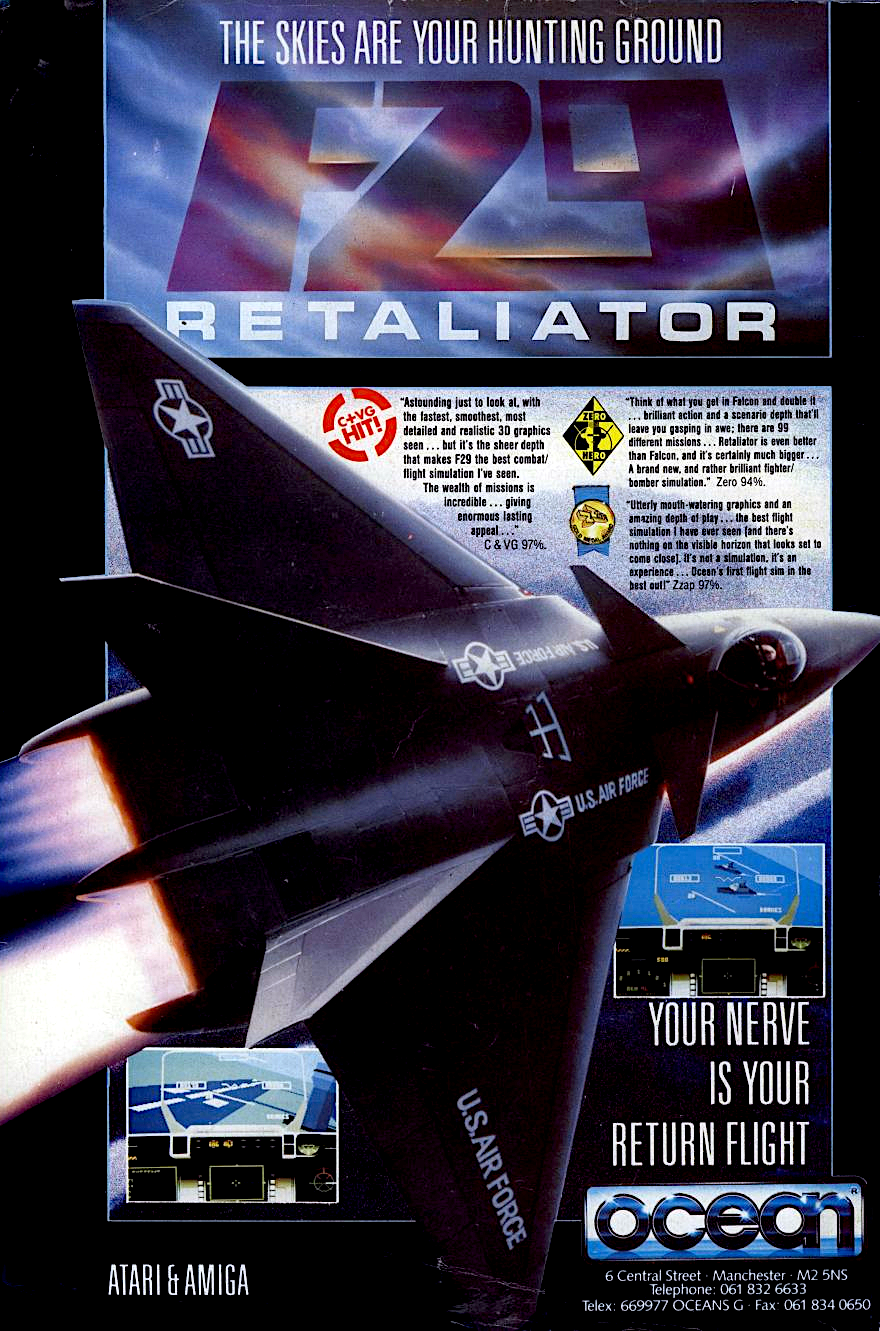 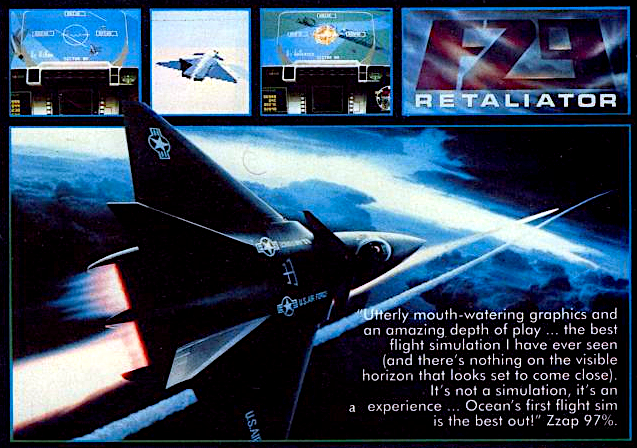