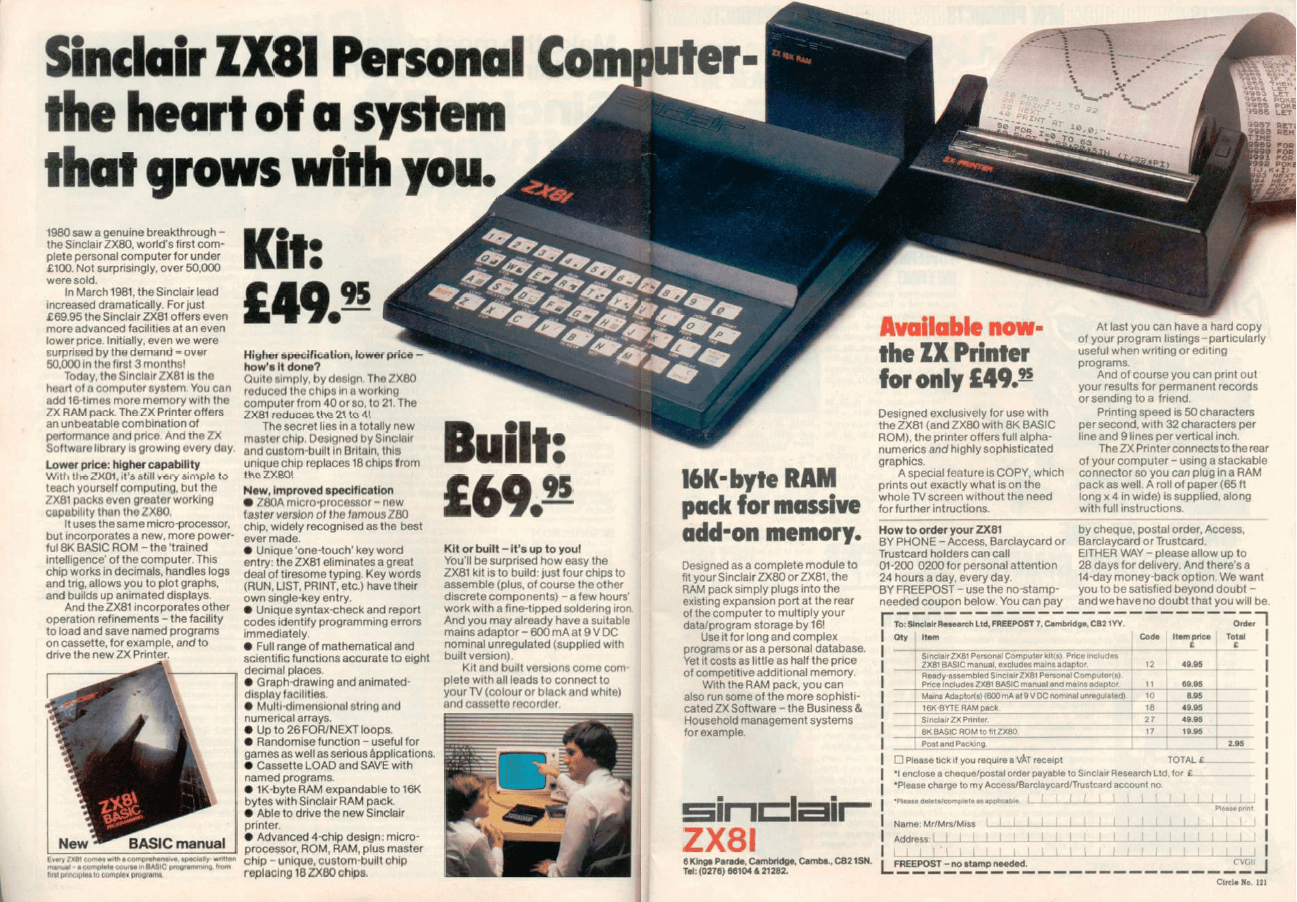 The ZX Spectrum (UK: /zɛd ɛks ˈspɛktrəm/) is an 8-bit personal home computer released in the United Kingdom in 1982 by Sinclair Research.

Referred to during development as the ZX81 Colour and ZX82, it was launched as the ZX Spectrum by Sinclair to highlight the machine's colour display, compared with the black and white of its predecessor, the ZX81. The Spectrum was released as eight different models, ranging from the entry level with 16 KB RAM released in 1982 to the ZX Spectrum +3 with 128 KB RAM and built in floppy disk drive in 1987; together they sold over 5 million units worldwide (not counting clones).

The Spectrum was among the first mainstream-audience home computers in the UK, similar in significance to the Commodore 64 in the US. The introduction of the ZX Spectrum led to a boom in companies producing software and hardware for the machine, the effects of which are still seen. Some credit it as the machine which launched the UK IT industry. Licensing deals and clones followed, and earned Clive Sinclair a knighthood for "services to British industry".

The Commodore 64, Dragon 32, Oric-1, Oric Atmos, BBC Micro and later the Amstrad CPC range were rivals to the Spectrum in the UK market during the early 1980s. While the machine was officially discontinued in 1992, new software titles continue to be released – over 40 so far in 2018.

Legacy
On 23 April 2012, a Google doodle honoured the 30th anniversary of the Spectrum. As it coincided with St George's Day, the logo was of St George fighting a dragon in the style of a Spectrum loading screen.

In January 2014, Elite Systems, who produced a successful range of software for the original ZX Spectrum in the 1980s, announced plans for a Spectrum-themed bluetooth keyboard that would attach to mobile devices such as the iPad. The company provided a crowdfunding campaign in order to fund the project, which would be compatible with games already released on iTunes and Google Play. Elite Systems took down its Spectrum Collection application the following month, due to complaints from authors of the original 1980s game software that they had not been paid for the content.

Later that year, a £100 Sinclair ZX Spectrum Vega retro video game console was announced by Retro Computers and crowdfunded on IndieGogo, with the apparent backing of Clive Sinclair as an investor, but without a full keyboard and manufactured in a limited capacity.

In December 2018, one of the alternate endings in Black Mirror: Bandersnatch included the main character playing data tape audio that, when loaded into a ZX Spectrum software emulator, generates a QR code leading to a website with a playable version of the Nohzdyve game featured in the episode.