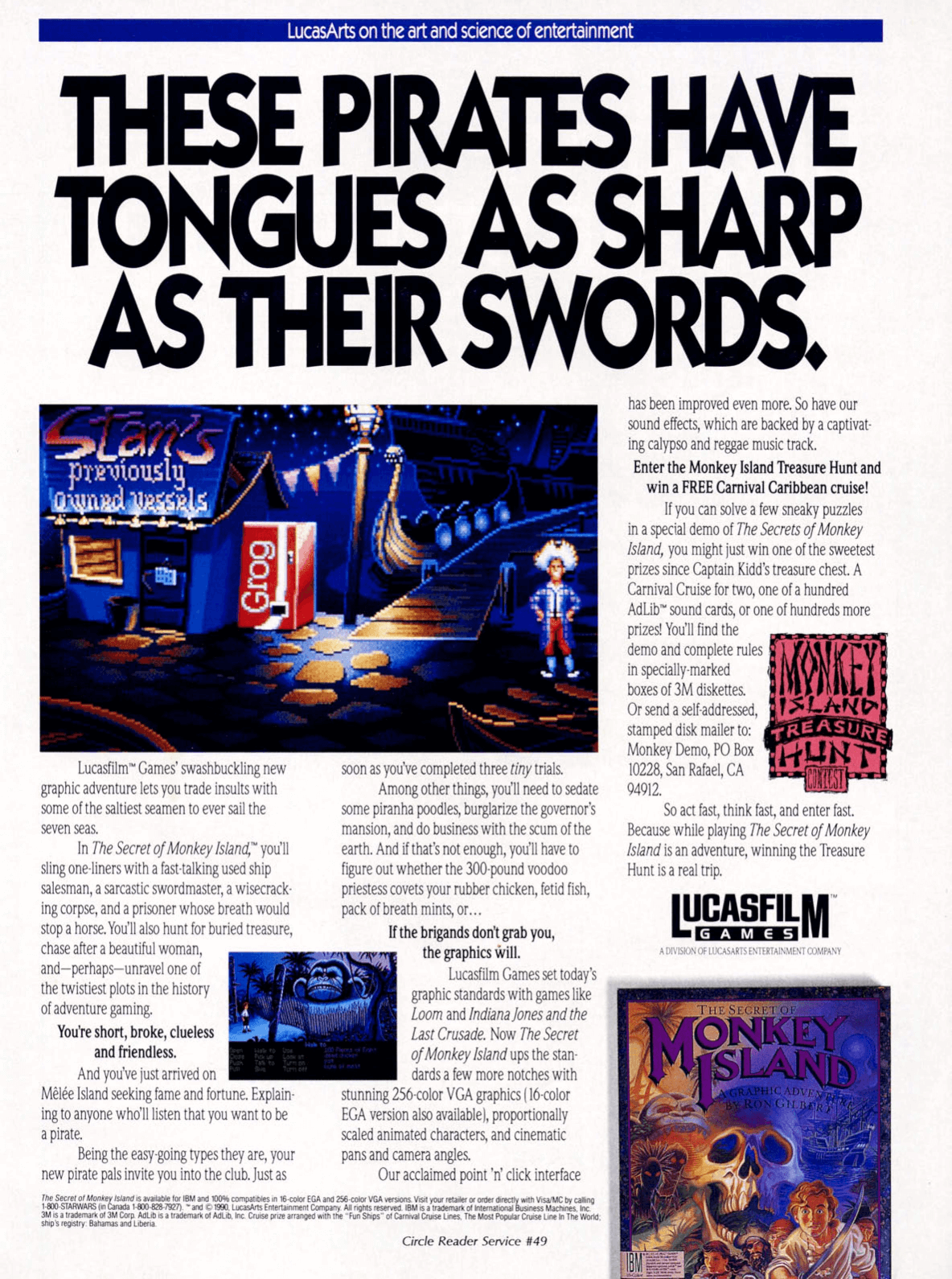 Description
Deep in the Caribbean lies Melee Island, ruled by the governor Elaine Marley. The cruel pirate LeChuck is deeply in love with her - so deeply that he refuses to accept his own death. As a ghost, he dwells with his undead crew somewhere near the mysterious Monkey Island. Meanwhile, a young fellow named Guybrush Threepwood is determined to become a real pirate. At the Scumm Bar he meets three pirates who tell him he has to complete three difficult tasks in order to be worthy of this title. But as Guybrush is trying to complete these tasks, he encounters the lovely governor, and this meeting changes his life forever. Risking to incur the wrath of LeChuck, Guybrush has to prove his wit is as sharp as his sword, and figure out a way to foil the ghost pirate's plans.

The Secret of Monkey Island is an adventure game that utilizes the command verb-based SCUMM interface first introduced in Maniac Mansion: the player constructs commands for Guybrush by selecting an appropriate verb and then combining it with an object or an inventory item. Objects that can be interacted with are highlighted when the player places a cursor over them. The game is the first LucasArts adventure in which it is impossible to get irrevocably stuck; like in Loom, the player character also cannot die. The branching dialogue system, where the player chooses between several available responses during conversations, allows the player to talk to characters in different ways without fearing a wrong choice, and is often used as a humorous device.

The puzzles are predominantly inventory-based; most of the problems in the game are solved by picking up items and combining them with each other or with objects (or people) in the game world. Several tasks are dialogue-based; among those is the humorous "insult swordfighting", which involves Guybrush learning and choosing witty insults while dueling pirates.

Inspiration
Though he's long been on the record regarding Monkey Island's inspiration from the Pirates of the Caribbean theme park ride (the ride, having earned its own movies, effectively nullifying any chance of a Monkey Island movie once in development), Ron Gilbert has come clean regarding another primary source of inspiration, a recently-back-in-print book by Tim Power entitled On Stranger Tides, ensuring a heavy injection of voodoo into the Monkey Island mythos.

CD versions
The CD version of the game features CD music, a furnished interface with graphical inventory items and new sound effects not seen in the disk version. If you try to load the game with "e" parameter, you won't see the inventory because it is 256 colors only.

The CD DOS and FM Towns versions of the game have slightly updated interface (with graphically represented inventory items instead of the text-only labels in the original version), as well as CD audio music tracks.

Concept notices
One of the first scribbles for Monkey Island that were used for the different story-branches hang in the bathroom of George 'The Fat Man' Sanger's studio in Austin/Texas.

Copy protection
The original version came with a code-wheel copy protection, in which you had to mix and match several pirate's faces and assemble their names.

Demo version
The demo version features story, dialogues and puzzles not present in the main game. More information can be found in its game entry.

Distribution
According to a G4 interview with Tim Schafer because Lucasarts was so small at the time and the first shipment of Monkey Island was larger than normal, Lucasarts asked the staff to go help stuff the boxes for the first shipment. So you might own a copy packed by the creators themselves!

Guybrush Threepwood
Guybrush got his name from the fact that in DPaint, the art software being used at the time, you saved palettes and other art particulars in files called "brushes", and the one for the guy who was the hero was called the "guybrush". "Threepwood" was decided by a company contest.

Herman Toothrot
The character of Herman Toothrot was added because the script was running a little slow once you got to Monkey Island...the player needed someone to talk to. 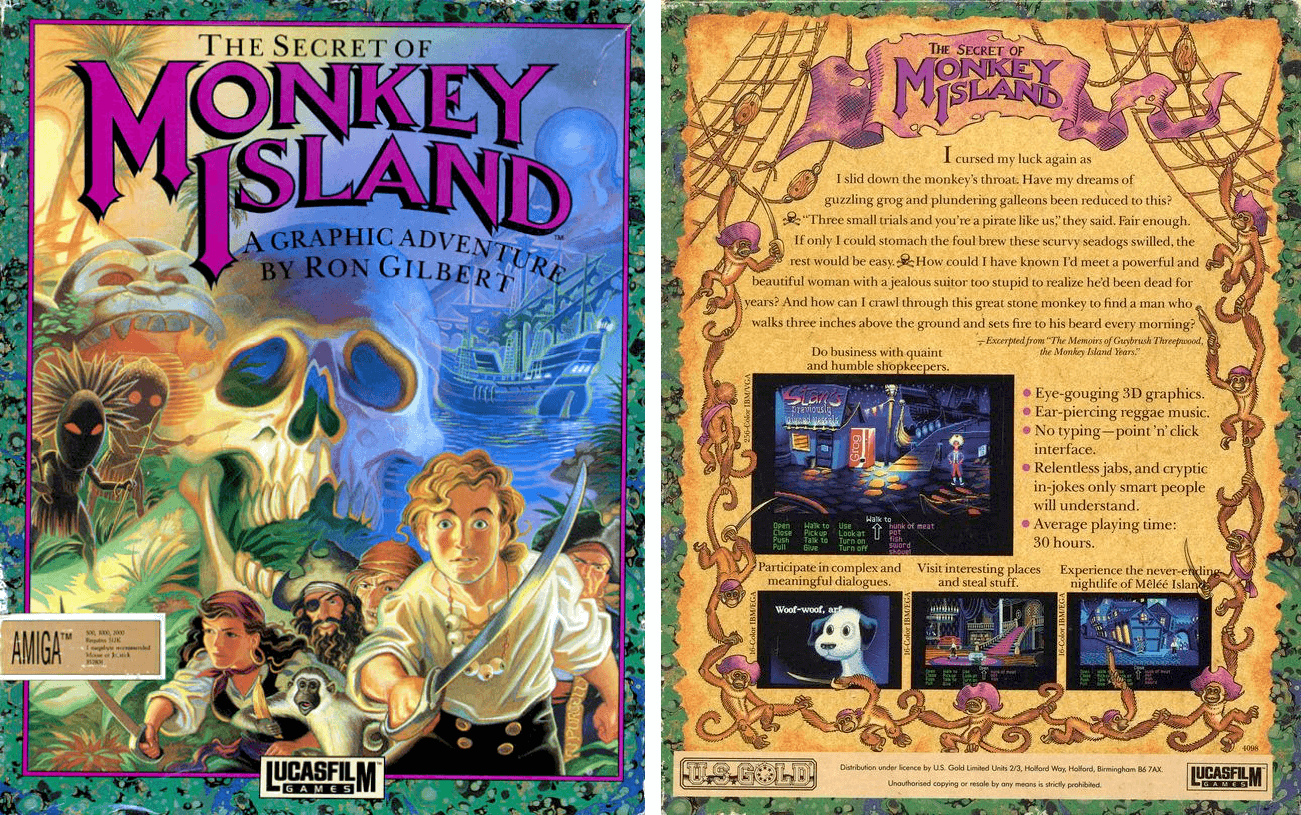 Legal trouble
The giant cotton swab, used as the key to the monkey head, was originally named a "Q-Tip" after the commercial brand name; however, according to Ron Gilbert, it had to be changed because "it would have been OK if we were using the Q-Tip in a "correct fashion", but taking a giant Q-Tip and sticking it into a stone monkey's ear is not "correct usage"

Originally, examining a skeleton in the voodoo lady's hut would cause Guybrush to comment: "Looks like an emaciated Charles Atlas." After a cease-and-desist letter from Charles Atlas Ltd., it was changed in later versions of the game.

Monkey Island
"Monkey Island" is a colloquial term used to describe the area on the roof of the bridge on a modern cargo ship. It is mainly used by the crews of the large cargo ships operating in the East Indies, South East Asia and the South Pacific.

Mono Island
Did you know there IS a real Monkey Island in the Caribbean Sea? Well, it's real name is Mono Island, but the word "mono" means "monkey" in Spanish.

PC Gamer release
A complete version of The Secret of Monkey Island is available on Classic Games Collection CD featured in the July 2000 issue of PC Gamer Magazine.

References
The troll on the toll bridge saying 'none shall pass' was inspired by Monty Python and the Holy Grail. The SCUMM bar early in the game is obviously a reference to the SCUMM game engine (which stands for "Script Creation Utility for Maniac Mansion"), created by Ron Gilbert of Lucasfilm Games/LucasArts, and which has been used in several other adventure titles including The Secret of Monkey Island. In order to practice insult swordfighting, Guybrush stops pirates on the road and says the line "My name is Guybrush Threepwood. Prepare to die!" This is probably taken from the duel between Inigo Montoya and the six-fingered man in The Princess Bride. During that duel Montoya repeats "My name is Inigo Montoya. You killed my father. Prepare to die!" 5 or 6 times. During the Governor's wedding scene near the end, Guybrush has the option to yell "Elaine!" which is a reference to a line from the movie The Graduate. Ron Gilbert liked that so much that he gave this first name to the originally nameless Governor.

Ron Gilbert
Stan is reportedly Ron Gilbert's favorite character in all of the Monkey Island games.

Except there is a mastering error for the background sound effects. Specifically, the night time forest sound effect on track 24 is only two seconds long, and this track continues on to the next three tracks, also cut off in seconds. Also, because of this error, there is no jungle background sound effect that should be present in track 25. Indeed, it’s curious to hear night time ambiance heard at Melee Island during the daytime when Guybrush is in the jungle on Monkey Island.

A fix to this problem can be done by taking the last two audio tracks from the PC-CDROM version (tracks 24 and 25) and, usually through an extraction of the data and individual audio tracks of the Sega CD disc (except tracks 24, 25, 26, and 27) and a creation of a proper cuesheet (complete with the 2 second pregap for all audio tracks) for burning through CDRWin, restore the correct sound effects playback for the game at the points affected for the Sega CD version. 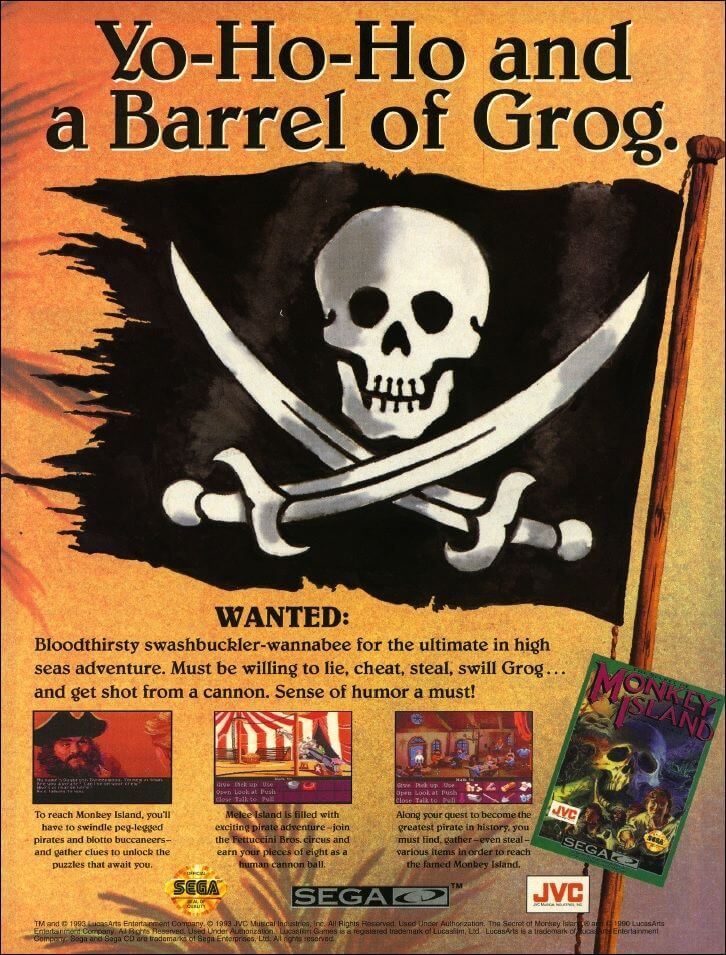 Spiffy
The back cover of some versions of the game has a screenshot with a close-up of Spiffy the Dog. The image is however not available in the original game. It was cut to save space on the floppy disks, but the marketing team had already chosen it for the artwork. The image of the close-up was added in the 2009 game The Secret of Monkey Island: Special Edition.

Win the Game
The "FUNCTION AND COMMAND KEYS" section of the enclosed reference documentation listed a somewhat peculiar option after the more conventional game interface options:

Enthusiastic game-players who jumped in before fully reading the manual might never have encountered that little easter egg. When the key combination was entered, the game would prompt the player: "Are you sure you want to win? (Y/N)" If the player responded Y, the screen would blank, then triumphantly flash"You Win! You scored 800 out of 800 points", regardless of how much (if any) of the game had been completed, all the while tootling the goofily festive music from the Fettucini Bros. circus tent. The regular closing credits (with more than a few joke titles there also) would follow, the entire interactive remainder of the game having been neatly bypassed. Truly here was proof that the playing of the game is far more satisfying than the mere winning of it.

Apparently some permutation of this easter egg is revisited in distant sequel Escape From Monkey Island.

Elements of the game have appeared elsewhere in popular culture. The original version was selected as one of five for the exhibition The Art of Video Games in the Smithsonian American Art Museum in 2011.[77] A fictive drink recipe in the game for grog was mistakenly reported as real in 2009 by Argentinian news channel C5N, which urged adolescents against consuming the dangerous "Grog XD" drink.[78] In Tales of Monkey Island, Guybrush refers to this news story while pushing the Grog XD button on a Grog machine.