Description
Virtua Fighter is considered one of the progenitors of one-on-one fighting games with fully 3D environments and characters. The fighters and arenas are rendered in flat-shaded polygons. Unlike many fighting games, Virtua Fighter focuses on gameplay based on actual fighting styles, rather than outrageous special moves and storylines.

There are eight fighters to choose from in Virtua Fighter, and an equal number of fighting backdrops in which to compete. Each fighter has a distinctive fighting style, and their own set of signature moves.

A critically acclaimed and hit game, Virtua Fighter was highly regarded for its in-depth fighting engine and real world fighting techniques, and has been revolutionary and highly influential in the evolution of the genre and video games in general. 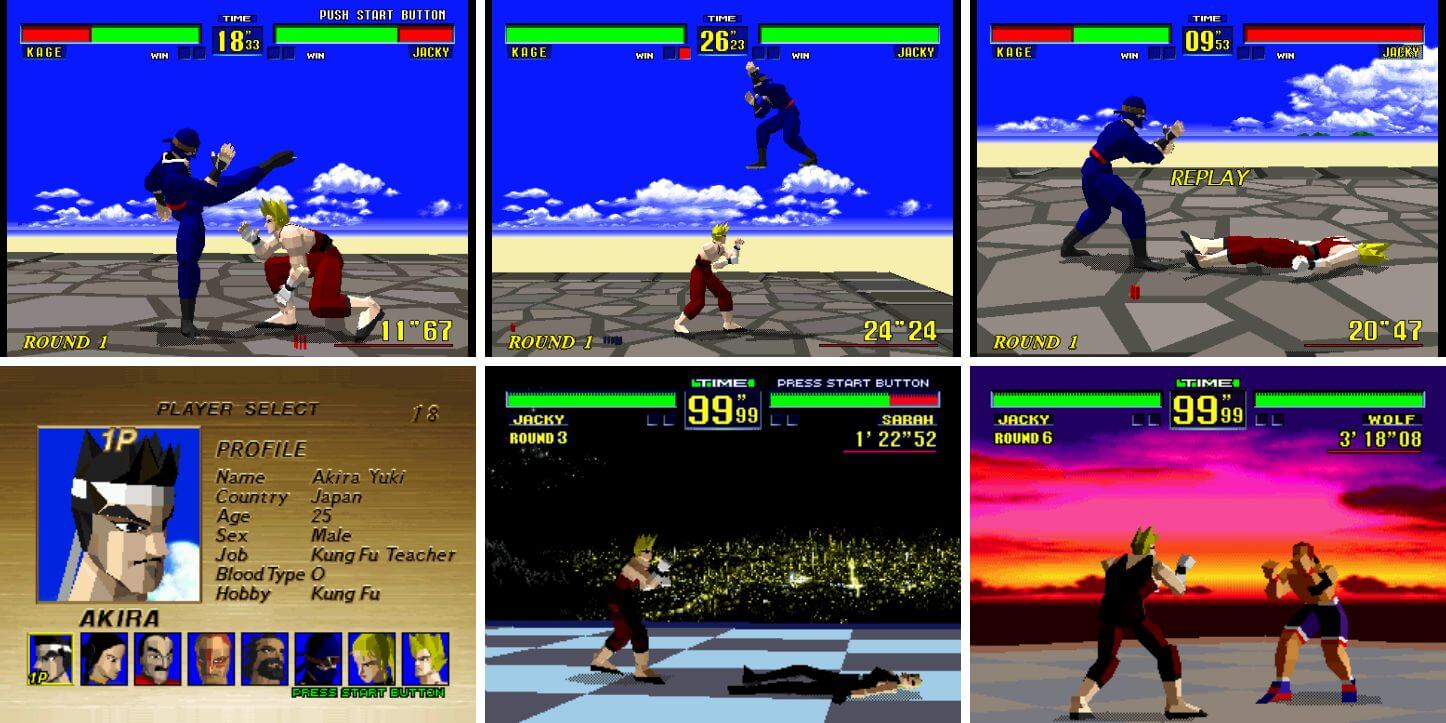 Development and release
Virtua Fighter was created using hardware jointly developed by aerospace technology firm Lockheed Martin and Sega, dubbed the Model 1. According to Sega of Japan's publicity manager, Kurokawa, "We deliberately didn't publicize all the [fighting] moves at the same time but instead revealed them to gamers one at a time by means of the Japanese videogame press." Virtua Fighter was a launch game for the Sega Saturn,[6] and served as the pack-in launch game in North America. Its Sega 32X version was developed by the same team responsible for the Genesis port of Virtua Racing.

In the previous PS2 release of Virtua Fighter 4, a button code would make the player's character look like a VF1 model. In Japan, the game was included as part of a box set with a book called Virtua Fighter 10th Anniversary: Memory of a Decade and a DVD.

The box set was released in November 2003 and was published by Enterbrain. In North America, the game was included in the home version of Virtua Fighter 4: Evolution, and in Europe it was only available as a promotional item; it was not sold at retail. 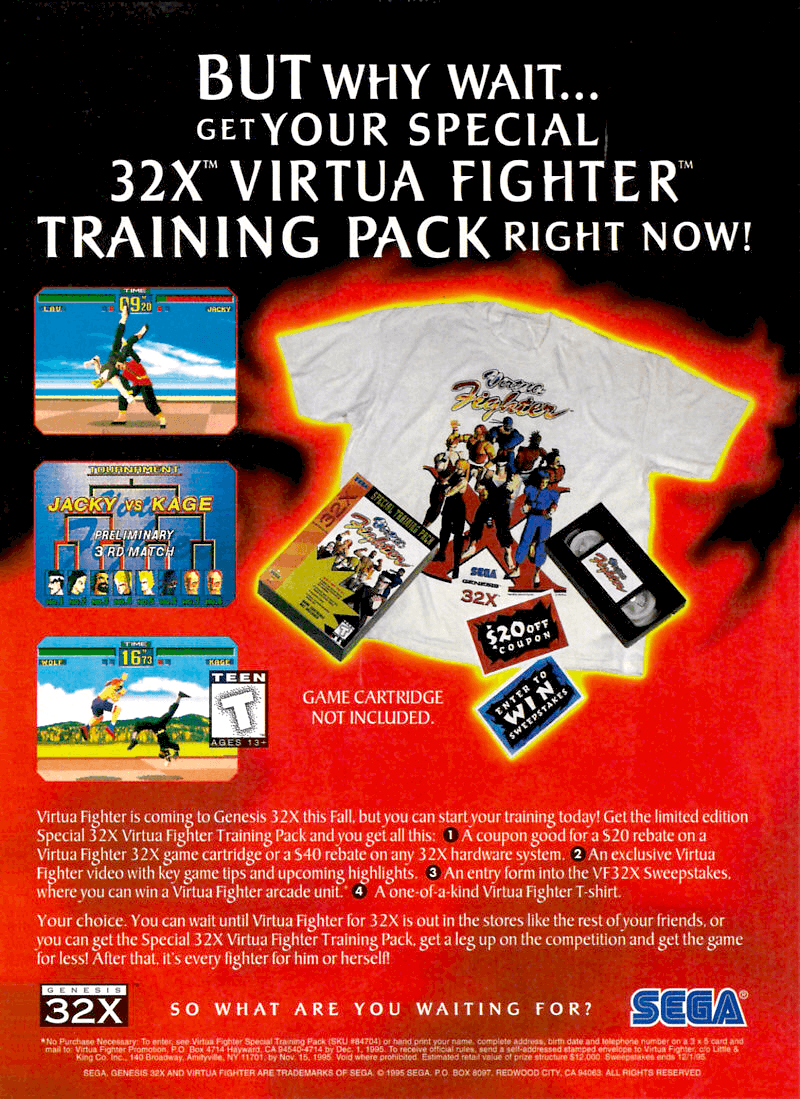 Legacy
Virtua Fighter dispensed with sprite-based graphics, replacing them with flat-shaded quads rendered in real-time, by the Model 1's 3D-rendering hardware, allowing for effects and technologies that were impossible in sprite-based fighters, such as characters that could move in three dimensions, and a dynamic camera that could zoom, pan, and swoop dramatically around the arena. It has been credited with both introducing and popularizing the use of polygon-based graphics in fighting games.

1UP listed it as one of the 50 most important games of all time. They credited Virtua Fighter for creating the 3D fighting game genre, and more generally, demonstrating the potential of 3D polygon human characters (as the first to implement them in a useful way), showing the potential of realistic gameplay (introducing a character physics system and realistic character animations), and introducing fighting game concepts such as the ring-out and the block button.

At a time when fighting games were becoming increasingly focused on violence and shock value, the popularity of Virtua Fighter demonstrated that fighting games focused on gameplay were still commercially viable.[48] Game designer Yasuyuki Oda remarks being impressed by this video game while working for SNK. 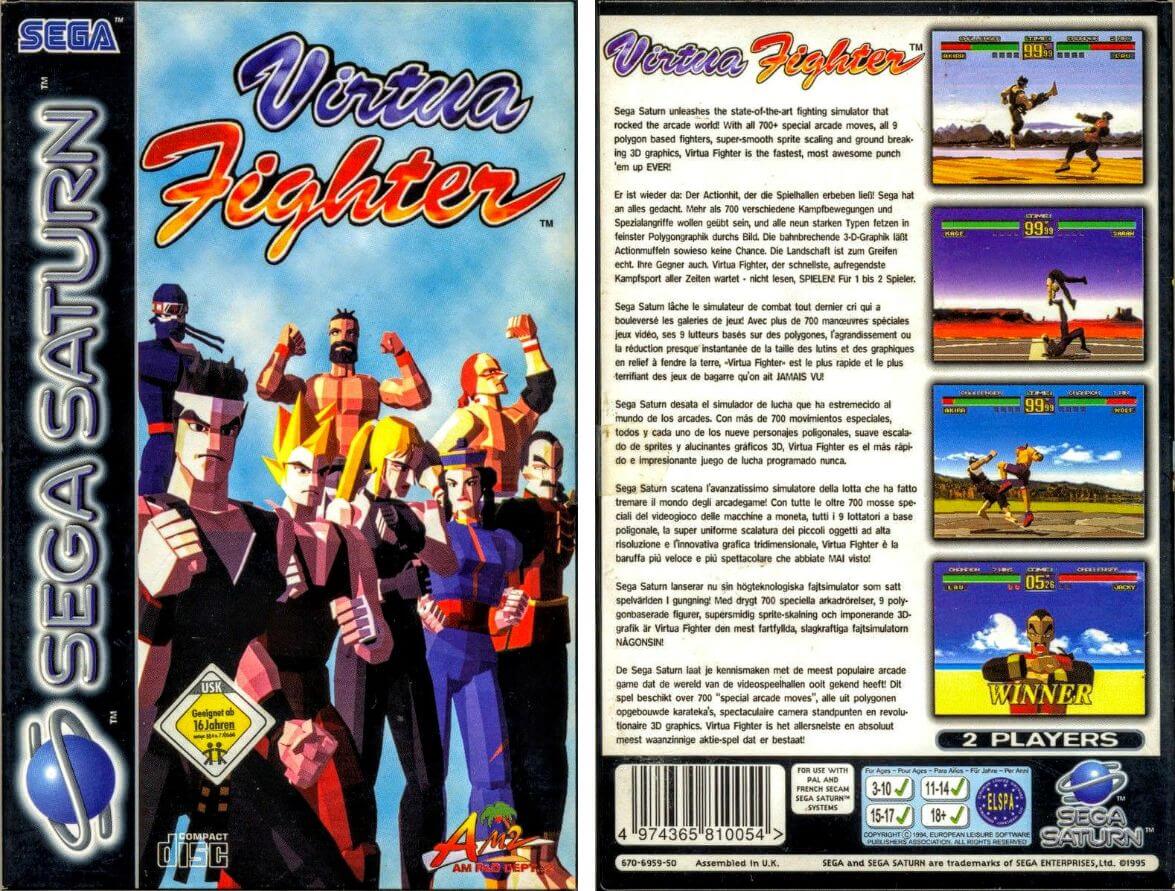 Virtua Fighter played a crucial role in popularizing 3D polygonal graphics. In particular, Virtua Fighter garnered praise for its simple three-button control scheme, with the game's strategy coming from the intuitively observed differences between characters that felt and acted differently rather than the more ornate combos of two-dimensional competitors. Virtua Fighter's fluid animation and relatively realistic depiction of distinct fighting styles gave its combatants a lifelike presence considered impossible to replicate with sprites.

Influences
Toby Gard also cited Virtua Fighter as an influence on the use of polygon characters—and the creation of Lara Croft—in Tomb Raider: "It became clear to me watching people play Virtua Fighter, which was kind of the first big 3D-character console game, that even though there were only two female characters in the lineup, in almost every game I saw being played, someone was picking one of the two females."