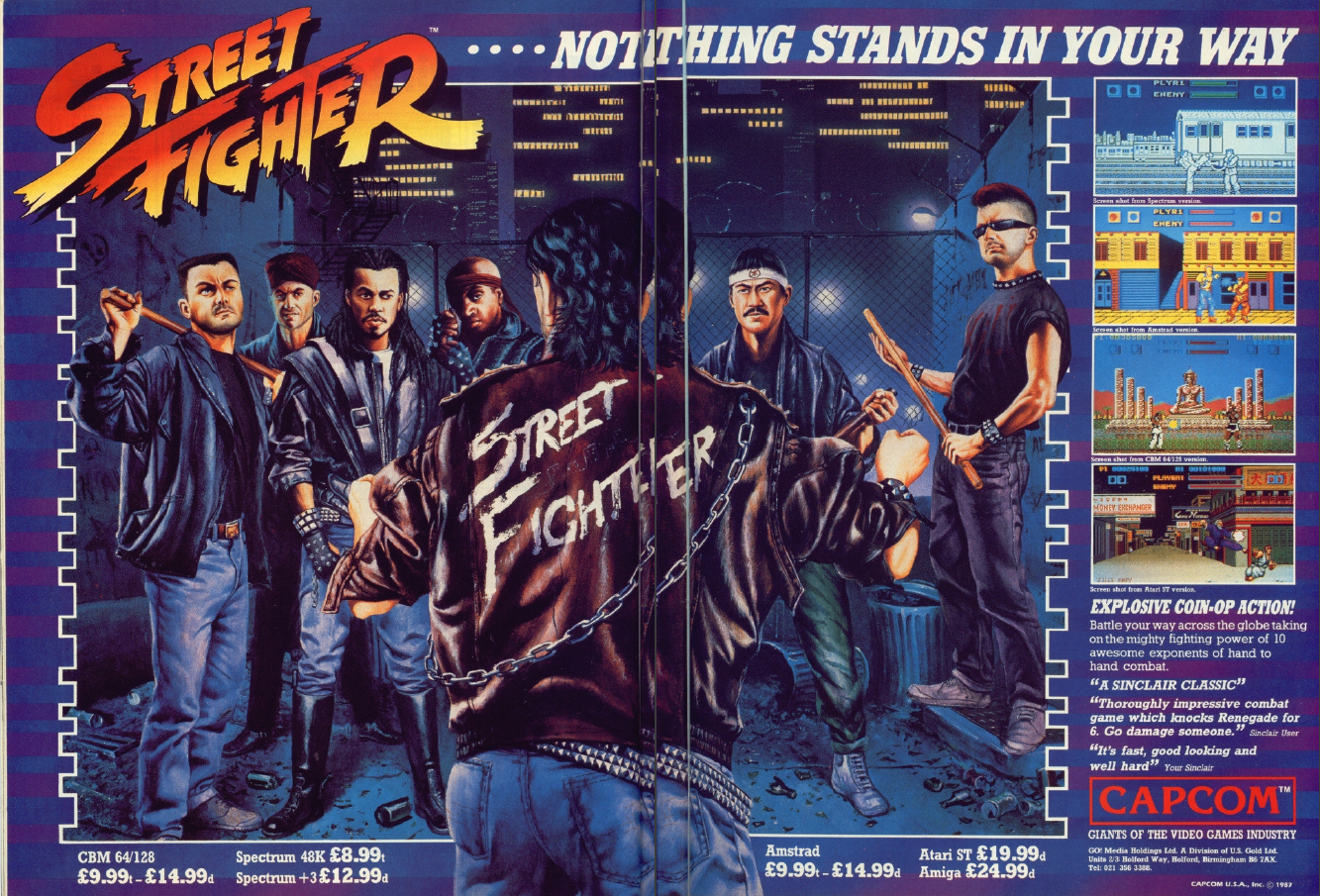 Description
You are Ryu, a Street Fighter. Your goal is to travel to 5 countries (Japan, USA, England, China and Thailand) and beat 2 enemies at each of them. Many of these characters, such as Adon, Gen, and Birdie, are later seen in the Street Fighter Alpha series.

After each country you will have the chance to get additional points in a little bonus round, a feature seen later in most Street Fighter games.

The final boss in the game is Sagat, who is the second to the last boss in Street Fighter 2. The goal is to become the greatest fighter in the world. As with most tournament fighting games once you have defeated the boss the game will reset and start from the beginning with a harder difficulty level.

It is possible to start a two player game but there will be only one fight (between the two players) which will determine who will travel the globe to fight the computer controlled opponents.

Arcade machine version
At least two versions of the Street Fighter arcade machine were produced in Japan and America, including one that used the now-standard one-joystick and six-button layout for each player (plus start buttons), and another that used one joystick and two huge fist-sized rubber buttons, which the player banged on to register hits. A light tap would be a jab, and a smash would be a fierce hit.

Street Fighter was based on a gargantuan three-layer 8-bit circuit board, developed prior to the advent of Capcom's hugely successful 16-bit CPS system. Street Fighter was limited largely by Capcom's use of a large number of old, but individually inexpensive, electronic components. But at the time it was a quantum aesthetic leap over two earlier games in the same genre, Yie Ar Kung Fu and Karate Champ.

In the Worldwide versions of the game, Ryu's and Ken's voices were dubbed so that they yelled the names of their moves in English (i.e.: Psycho Fire, Dragon Punch, Hurricane Kick). Subsequent localized releases left the Japanese voices intact.

Development
Street Fighter was produced and directed by Takashi Nishiyama (who is credited as "Piston Takashi" in the game) and planned by Hiroshi Matsumoto (credited as "Finish Hiroshi"), who both previously worked on the overhead beat 'em up Avengers.

The two men would leave Capcom after the production of the game and were employed by SNK, developing most of their fighting game series (including Fatal Fury and Art of Fighting). The duo would later work for Dimps and work on Street Fighter IV with Capcom.

Keiji Inafune, best known for his artwork in Capcom's Mega Man franchise, got his start at the company by designing and illustrating the character portraits in Street Fighter. Nishiyama drew several inspirations for developing the original gameplay of Street Fighter from martial art styles he was practicing at the time.[16][17]

After U.S. Gold acquired the license to convert 10 Capcom arcade games for £1.2 million in 1987, they were experimenting about the best way to create the home-computer conversions. So Street Fighter was converted to the C-64 by two different companies as an experiment, one in the US and one in the UK (by Tiertex).

The result was quite different: while the US version "looked more like Yie Ar Kung Fu, with static backdrops and smaller characters" (cited David Baxter, U.S. Gold/GO!), the Tiertex version featured large sprites and scrolling backdrops.

Having two versions of the same game, they simply shipped both: the Commodore Street Fighter cassette featured the US version on one side and the UK on the other, letting the player decide which one to play.

For U.S. Gold the UK version won: further Commodore 64/128 conversions were done in the UK, and the 16-bit conversions in the US.

UK National Computer Games Championship 1988
The Spectrum version was used as competition game in the qualifiers for the computer gaming contest in the UK in 1988. The game was played for high-score.

An emulation of the original arcade version is featured in the Street Fighter 30th Anniversary Collection. (PlayStation 4, Xbox One, Nintendo Switch, Microsoft Windows)