Castlevania: The New Generation/Bloodlines - Video Game From The Early 90's 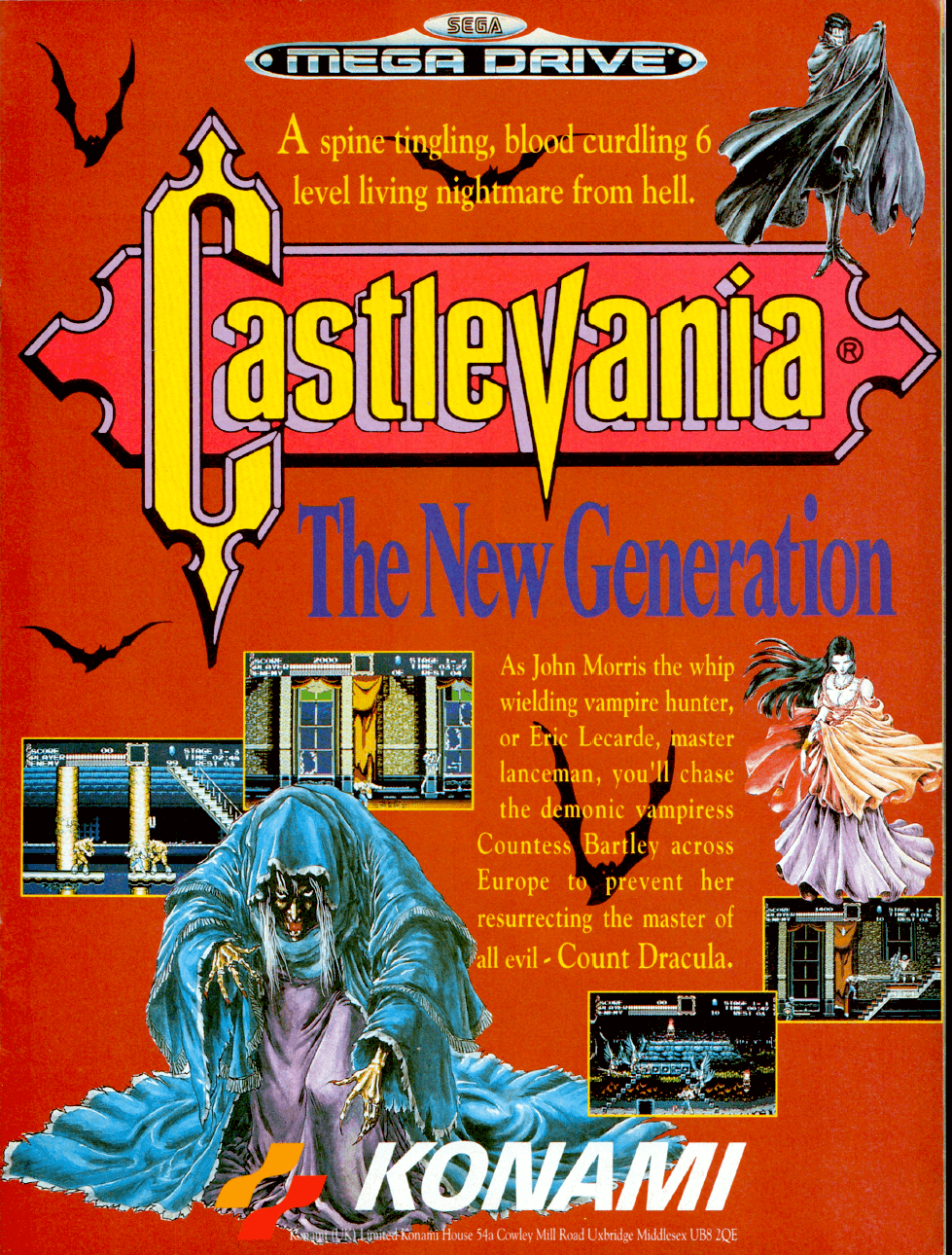 Description
In the year 1917, evil had threatened to rise up again in Transylvania. A young lady named Elizabeth Bartley, who was tried as a witch and killed centuries before, was planning to resurrect the Prince of Darkness, Count Dracula, once again. The latest of the Belmont lineage, John Morris, and his friend Eric Lecarde, must now travel across Europe to the Palace of Versailles in France, where Bartley is planning the resurrection. And in their way stands Dracula's strongest followers yet...

Development and release
The game was originally released as a side story of Castlevania series. Eric's facial features were more feminine (i.e., bishōnen) in the Japanese version. When brought to North America, his facial design was changed in the intro to seem more masculine. Although also changed for the European and Australian versions intro, his feminine face was kept for the cover of those releases.

Censorship
Castlevania: Bloodlines underwent censorship during localization to PAL regions in Europe and Australia. The word blood was kept out of the title at the time. Therefore, the title was altered to Castlevania: The New Generation. When the game starts, the blood from the bottom of the title screen was changed to water.

The zombies were changed from pink to green to make them less gruesome. In the European version, Eric's spear does not impale him after he dies. There was a rearrangement of enemy placement as well, making the difficulty either easier or harder depending on where in the game the player is. 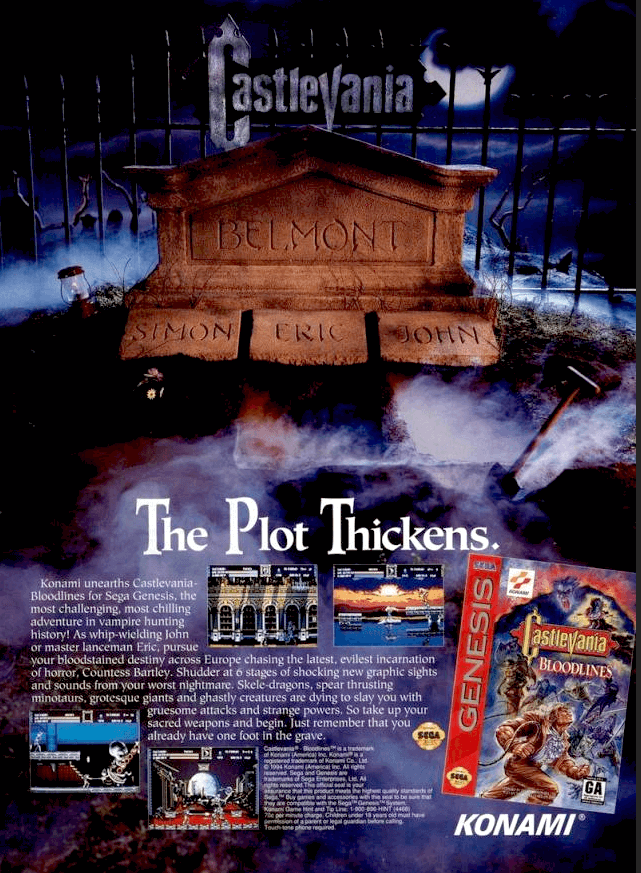 Audio
The music of Bloodlines was composed by Michiru Yamane, who later garnered acclaim for her score for Castlevania: Symphony of the Night and subsequent handheld Castlevania adventures. Though she once admitted to have worked under extreme pressure and deadlines,[6] this soundtrack met the standards of the previous entries and is highly regarded on its own for its gloomy atmosphere.[citation needed] The music for the second level, titled "The Sinking Old Sanctuary," was reused in later Castlevania games, Circle of the Moon, for the Game Boy Advance, and Legacy of Darkness, for the Nintendo 64.

The main themes for each of the first levels of the three NES Castlevania games (Vampire Killer, Bloody Tears, Beginning) are accessible in-game with a code, can be played in the sound test and one will be chosen randomly to play when the player obtains the maximum weapon power level. Also, Nothing to Lose (the Castle Keep theme for the NES Castlevania) was played in the final part of the first stage. Theme of Simon (from Super Castlevania IV) plays after defeating Elizabeth and before the battle with Dracula. 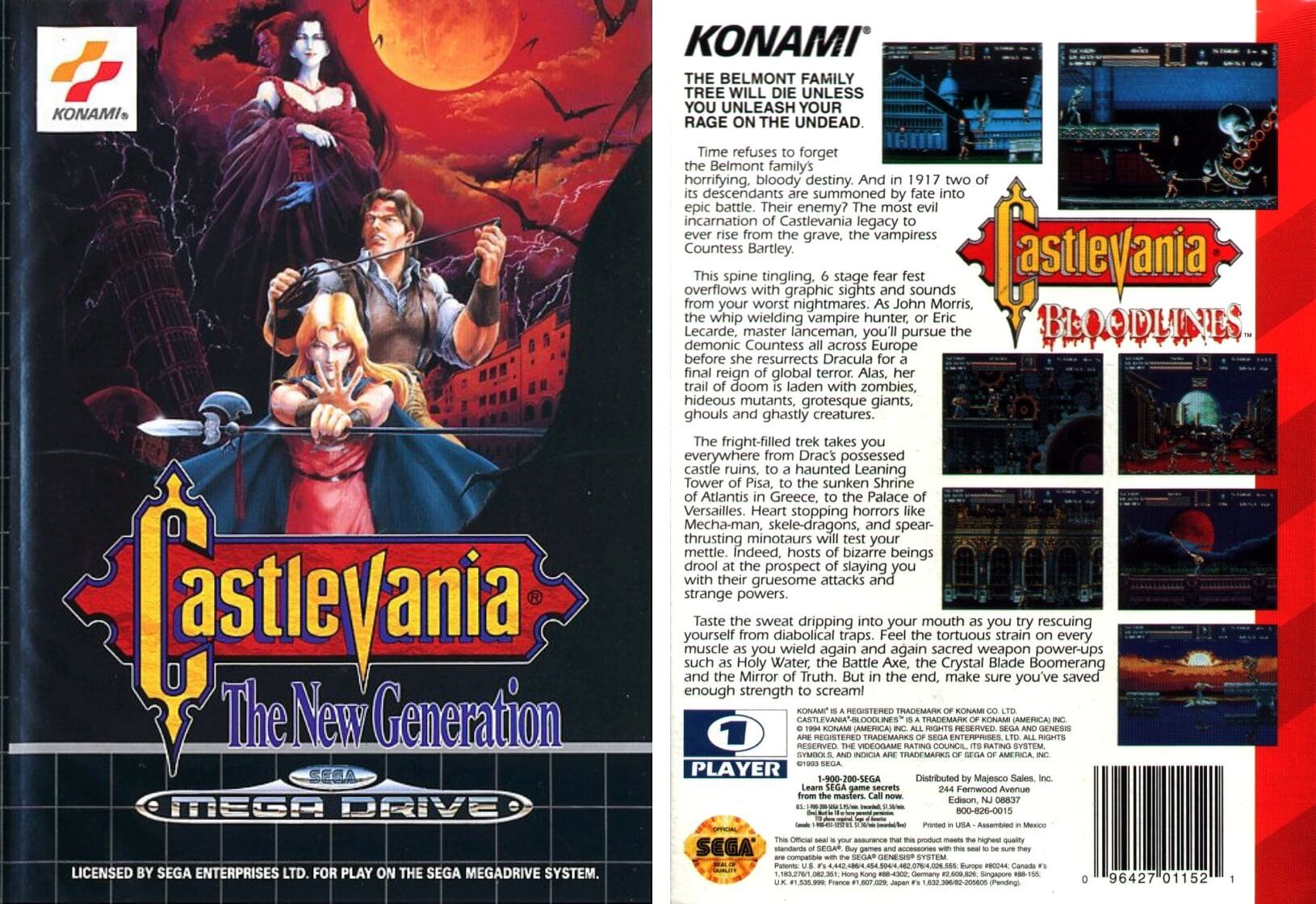 Packaging
The packaging artwork for the North American version was created by Tom Dubois, who also designed the packaging for many other Konami titles outside Japan.

Anniversary collection
On May 16, 2019, the game was included in the Castlevania Anniversary Collection, released for PlayStation 4, Xbox One, Steam and Nintendo Switch, marking the first time that the game has ever been re-released in any form.